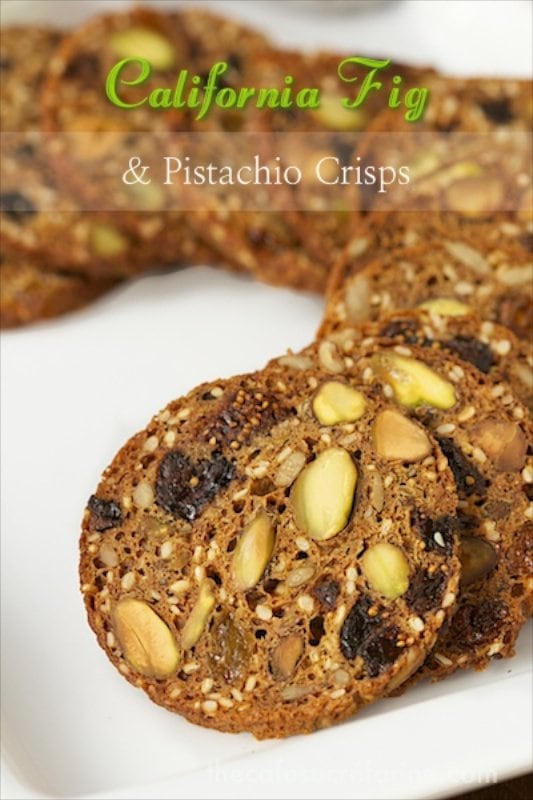 Have you had those fabulous seeded crackers from the gourmet markets? They're loaded with dried fruit, nuts and seeds. Thin and super crisp, they make a delicious nibble on their own and are also quite sensational with soft and hard cheeses, hummus and spreads of all varieties. However....they're EXTREMELY EXPENSIVE!

Even at Trader Jo's, which has wonderful gourmet products at reasonable prices, they're selling for four dollars for a small box. And at the fancy-dancy markets.... well, be prepared to spend most of ten dollars for an even smaller package. 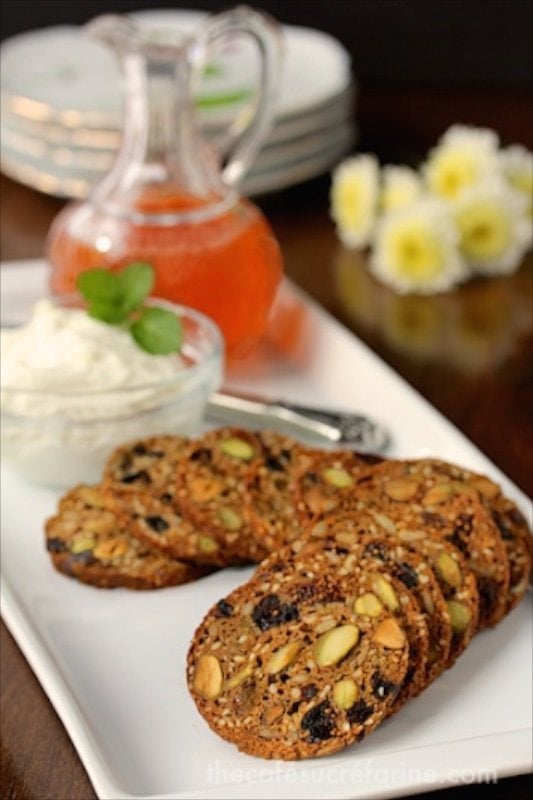 Guess what? You can make these delightful, healthy crackers at home for a FRACTION of the commercially packaged price. And with this recipe, you can have fun mixing and matching the seeds, nuts and dried fruit to your own taste.

Fun is definitely what we had while coming up with these Seeded California Fig & Pistachio Crisps. It all started with a wonderful package on our front steps. It arrived from sunny California loaded with beautiful dried figs and with some awesome OXO kitchen tools. The package was part of a recipe development challenge for EatWriteRetreat, a blogger's conference we'll be attending in Philadelphia in two short weeks. 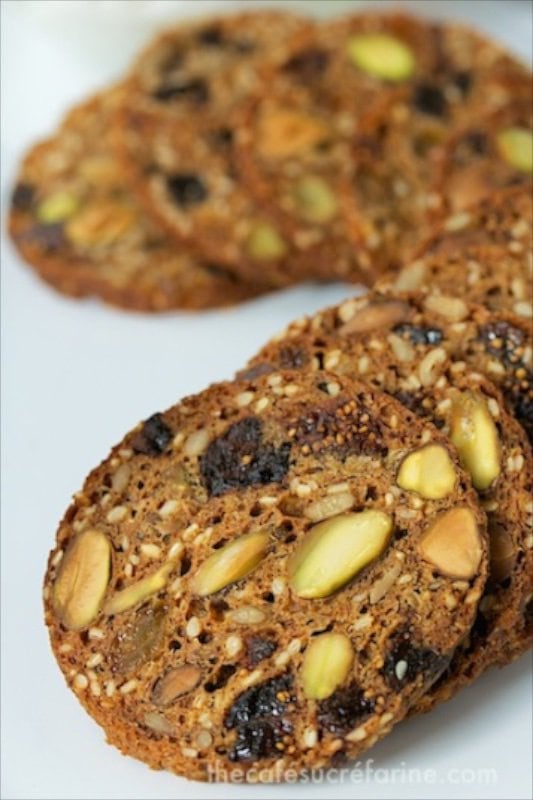 If you're a regular reader here at The Café, you may be feeling like you're having deja vu, since I mentioned a similar package several weeks ago filled with California Raisins. I used them in my Sweet & Spicy California Raisin Jam w/ Orange & Ginger. No, you're not dreaming, we actually received TWO of these fun packages since Scott and I will both be attendees at the conference.

The challenge was to come up with an appetizer using the "mystery" ingredient we received in our packages, this one was California Figs. We enjoy figs, both fresh and dried here at the Café, so we were excited about the assignment. I love it that they're an all natural energy source and are fat, sodium and cholesterol free. The old brains were whirring as we tried to decide which way to go, and it seemed like we had a zillion ideas. 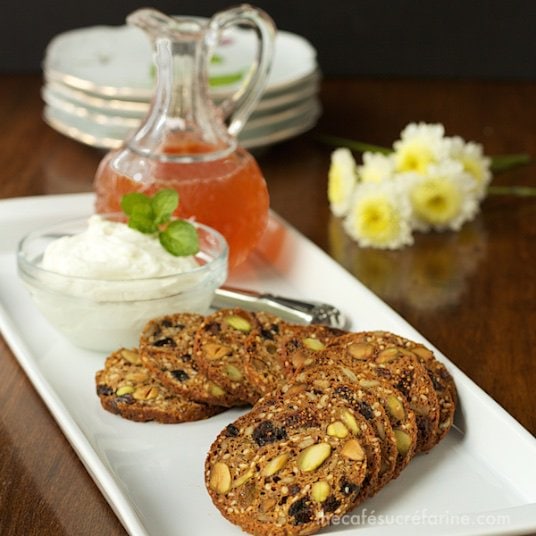 We finally decided on a crisp, healthy cracker that would mimic those fancy seeded gourmet delights. I got to work in, what my husband calls, "the mad scientist mode". We (I did the cooking and Scott was the taste-tester and critiquer) tried different combinations and amounts of ingredient, varying the pan shapes as well as the baking times and temperatures.

We're super happy with the final results. Our crisps include equal amounts of all-purpose and whole wheat flour, Greek yogurt, low fat milk, brown sugar, honey, lots of healthy seeds, pistachios, golden raisins and a generous portion of the delicious California Figs. I baked them in small pans and, after cooling, sliced them super thin and popped them back in the oven for a final crisping. With the other half of the batter, I used empty tomato cans which made round-shaped crackers ...................... beautiful on a cheese or appetizer tray! 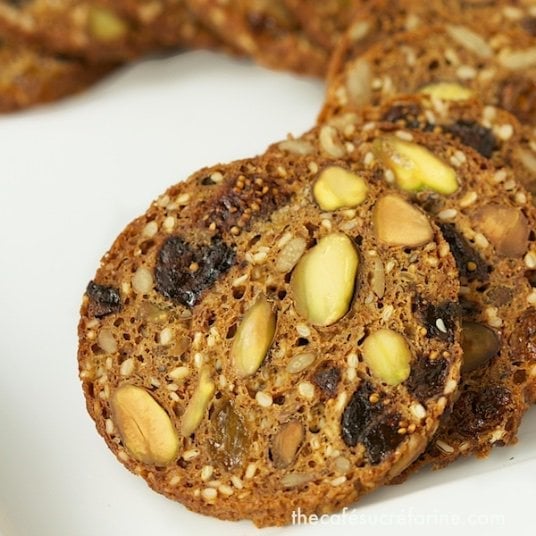 One last thing I love about this recipe; it makes a TON! ................. but you don't have to make all the crackers at one time. You can throw the whole baked loaves in the freezer and when you get the call that company's coming, pull one out, slice it thin and pop it in the oven. When the doorbell rings, the most delicious aroma will greet your guests and they'll think you ARE the gourmet market! 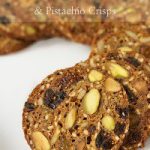 ~ *Use milled or ground flax seed whenever possible. Whole flax seeds are not easily absorbed and therefore much of the nutritional value is lost.
~ If weather is humid and crackers loose some of their crispness, you can easily restore their deliciousness by placing in a 250˚F oven for 10 minutes.
~ Mix and match the seeds and nuts to your liking, just keep the total amount the same. Also feel free to substitue different dried fruits, really the sky's the limit to the variations that are possible here.
~ A tablespoon of chopped fresh rosemary is a delicious addition to this recipe. We wanted to let the figs shine on their own this time, but we also tried it with the rosemary and it's wonderful!
~ When you're slicing the crackers, it will be difficult to slice thin when you get to the end of the loaf. Instead of wasting the last little bit, I cut the ends up into little cubes, toast them in a separate pan as the crackers bake and voila! Delicious croutons that will jazz up the simplest salad!
~ If you're tired of granola, these are wonderful for breakfast with fresh fruit and yogurt!