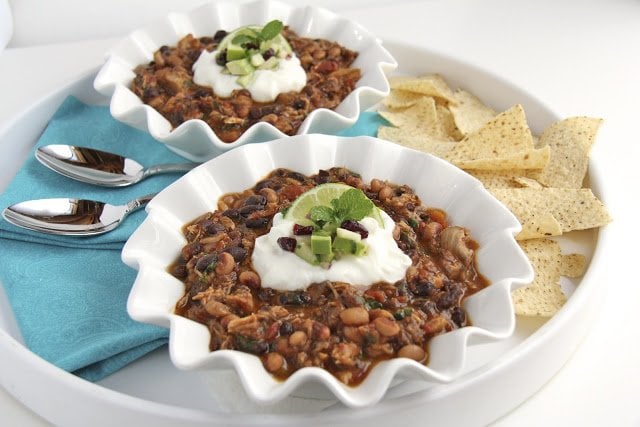 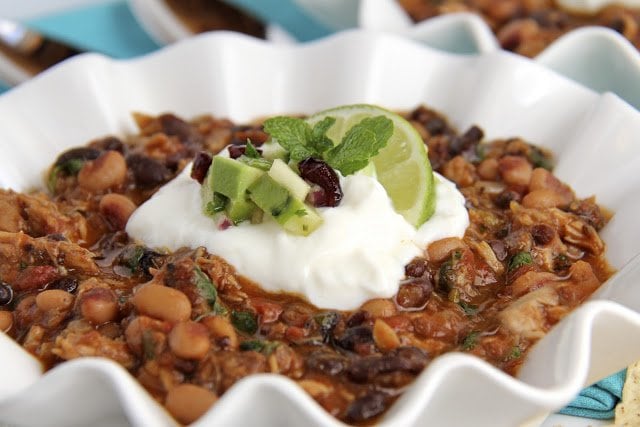 Well, maybe not "arrived", but at least taken one more step toward being an authentic, genuine, bonafide Southerner!! You see, I grew up and spent my young adulthood in the northernmost reaches of midwestern United States. When we moved to the Southeast thirty years ago, I realized that there were tons of customs and traditions that I'd never heard of, figures of speech that I'd no clue as to the meaning of and crazy things these wonderful folks ate that I'd never dreamed people actually consumed - all this.... and I never even left the good old U.S.A.!

Over the years I have taken on more and more "Southernisms" and this year I have succumbed to yet another; a widespread tradition that involves welcoming the New Year with black-eyed peas. Black-eyed peas?!?!? Yes, according to Southern folklore dating back to the Civil War, consuming black-eyed peas on New Years Day is supposed to bring luck, health and wealth. While we're not believers in "luck", (only God's good, sweet grace)  I think traditions are fun and I've discovered that black-eyed peas are quite delicious!

While this chili is actually quite versatile - you can really add whatever type of beans you have on hand or prefer - I decided on black beans and black-eyed peas. It's a very hearty chili with lot's of shredded pork loin (leftover from one of our holiday meals) and chorizo sausage, a seasoned sausage that is common in Spanish and Mexican cuisine. Thick, meaty, loaded with smokey fire-roasted tomatoes and wonderful spices and herbs,yum! Aafter our first few bites, Scott and I deemed it most definitely blog worthy! 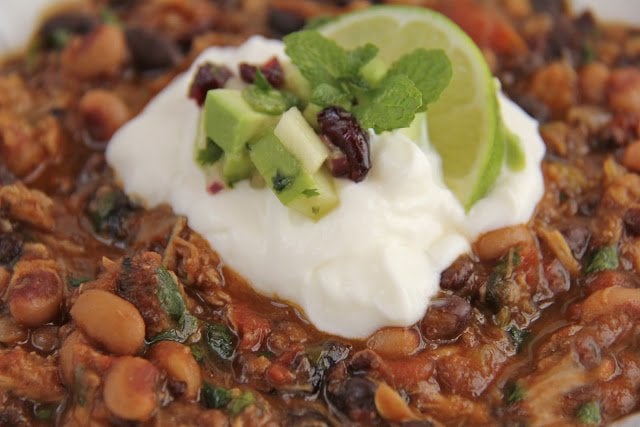 I like to serve this Pork and Chorizo Chili w/ Black Beans and Black-eyed Peas with tortilla chips,  a dollop of sour cream and a mound of salsa. It was delicious today with the Granny Smith Apple and Avocado Salsa but Dulce's Mexican Sauce, Fire-Roasted Salsa with Fresh Corn and Pineapple or your own favorite salsa would be equally delicious! 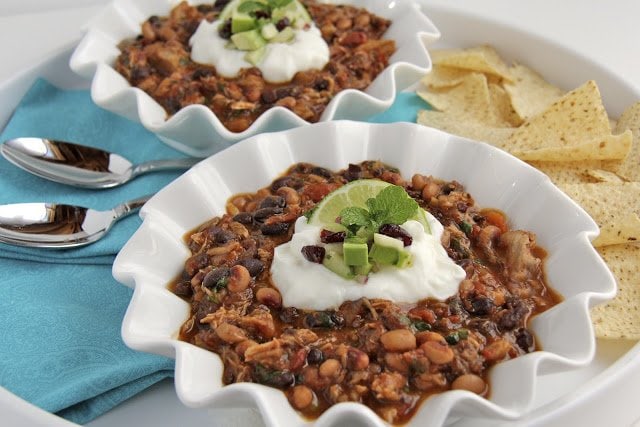 This is a wonderful way to use up leftover pork roast or pork chops. I love a yummy pork roast dinner, but I'm not crazy about it rewarmed and served as leftovers. This delicious recipe takes leftovers to a fabulous new level! Oh, and by the way, this chili freezes just beautifully - I'm saving some to break out on New Year's Day,who knows? I might just start talking with a sweet Southern drawl one of these days, y'all! 🙂 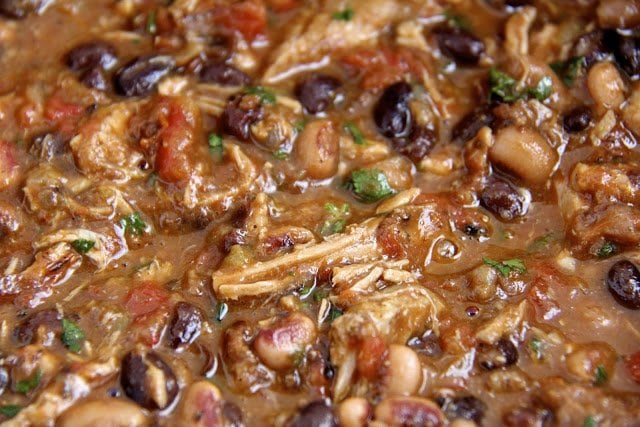 Directions:
1. Heat 1 tablespoon of oil in a large dutch oven until hot. Crumble the chorizo into pot and cook over medium-high heat. Cook, stirring frequently, until lightly browned about 3-4 minutes. Add the onion and 1 teaspoon salt. Cook, stirring frequently, about 5 minutes, or until onions are softened. Stir in the garlic and cook until fragrant, about 30 seconds. Remove pot from heat and drain off most of the fat. (I just tilt the pot, push the meat to one side and let the grease drain away from the meat mixture. I take several thicknesses of paper towel and soak up the grease.) Add the flour and stir for several minutes until incorporated.

2. Add the salt, garlic, cumin, chili powder, oregano, brown sugar, first ½ cup of cilantro, beer, tomatoes, black beans, black-eyed peas, green chilies, and sliced pork. Stir well to combine and bring to a boil. Reduce the heat to medium-low and cover. Simmer for 1½-2 hours or until pork is tender. Remove pork from pot and set aside to cool for about 30 minutes. In the meantime continue to simmer chili, uncovered - it will become a bit thicker as the extra liquid evaporates. When meat is cool enough to handle shred meat into bite sized pieces with two forks or fingers and return to pot. Stir in the cilantro and season with salt and pepper to taste.
Serve with tortilla chips, a dollop of sour cream and a scoop of salsa, if desired.

This recipe makes a TON! It freezes beautifully but if you don't want to make such a large batch, just cut it in half - you'll still have a nice sized pot of chili!

Notes:
* Chorizo is a seasoned sausage that is common in Mexican and Spanish cuisine. In the past, it was a often difficult to find without access to a Hispanic grocery. Nowadays most larger markets carry chorizo. I really like the Johnsonville brand which is quite readily available nationwide, and is fairly low in fat.
** Chili powders can vary immensely in flavor and intensity so always start off judiciously and add more, to taste.
*** This recipe is very versatile - if you prefer other types of beans, feel free to substitute!
**** If you don't have left-over pork you could substitute 1-2 pounds of pork tenderloin for the pork loin/chops. Add the uncooked pork tenderloin to the tomato/bean mixture in step 2. Check the pork after about an hour of cooking time - it won't take as long to become tender.
PRINTABLE RECIPE