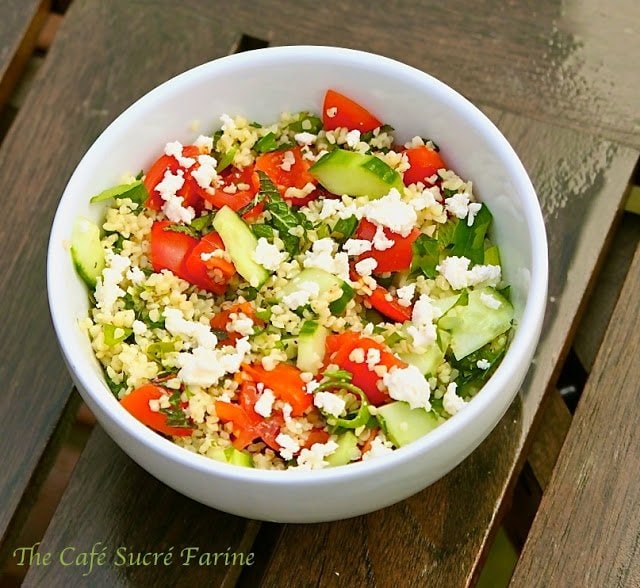 I'm excited today to share a post by my daughter, Caitlyn. Ever since I visited her in London in February, I've been hoping she'd share her delicious tabbouleh recipe .......
............ It's taken awhile as she has three little girlies to care for along with another in the "hopper". 🙂 I had to laugh when she sent the pictures, apologizing because she didn't think they were as good as her daddy's photos (my wonderful photographer) - and adding this disclaimer to her apology "I know they don't compare:) but Dad doesn't have to lock his kids in the house in order to get his pics!! haha!!" .

I think her pictures are quite lovely and it makes me smile to think of those three darling faces pressed up against the window pane watching their "mum" take photos of this wonderful tabbouleh in their courtyard! 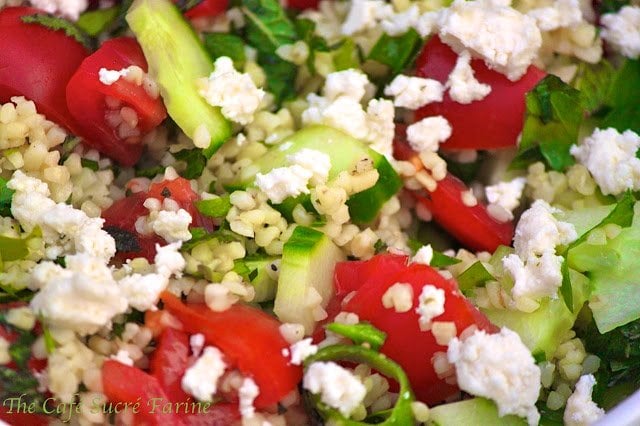 There's a new branch of a wonderful Mediterranean restaurant that opened recently less than a mile from my parent's home. My mom and I had lunch one day while we were visiting at Christmas. From that point on, all I could think about was recreating what we had eaten there! It was fabulous, healthy and...... so very fresh!

I live in London, so you'd think that a similar restaurant wouldn't be hard to find with all the ethnic diversity here - however, I fail miserably at being adventuresome when it comes to dining out. My Mom should be ashamed- as she and my Dad fall at the complete opposite end of the spectrum. So, instead of searching out a fabulous little Mediterranean restaurant here, I started Googling and found this tabbouleh recipe from Ina Garten.

There are a few things* that I change when making it, but it's pretty close to her original since it's quite good as is. Truth be told, my mom has been begging me for weeks, (actually months!) now to make this again so she could post it. The problem was that I ate so much of it during my first trimester of pregnancy in January and February that I couldn't bring myself to make it again until recently! But, since making this tabbouleh again, I'm back on the Mediterranean kick. After trying it I think you might find yourself on one, too! ~ Caitlyn 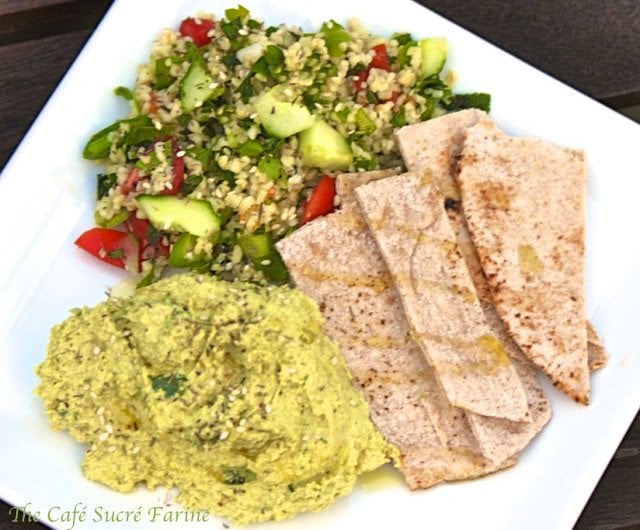 Place the bulghur in a large bowl, pour in the boiling water, and add the lemon juice, olive oil, and 1 ½ teaspoons salt. Stir, then allow to stand at room temperature for about 1 hour.

2. Add the scallions, mint, parsley, cucumber, tomatoes, 2 teaspoons salt, and the pepper; mix well. Season, to taste, and serve or cover and refrigerate. The flavor will improve if the tabbouleh sits for a few hours.

Note:
~ *This is Ina's recipe. I basically follow it as is except that I don't add the tomatoes and cucumbers til I'm ready to serve it. I top it with feta and zaatar. Oh, and I cut the salt by 1 teaspoon. 🙂