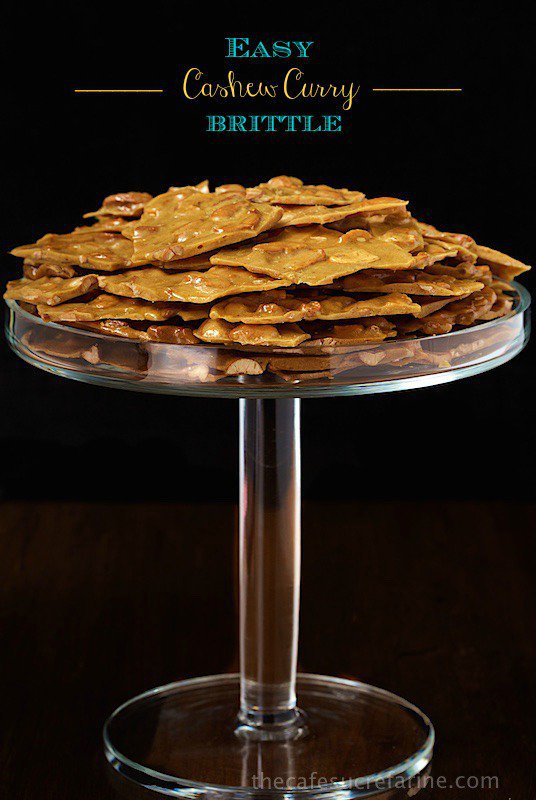 I know, I know this recipe sounds a little ... odd. Right? I mean really, curry in candy? But before you write off this recipe and click on over to another site, let me just share a bit about this unbelievably delicious candy...

Scott and I were sitting in front of the fire one chilly morning this past week. He was checking out the latest news on his iPad and I was looking through a pile of recipes I'd recently torn from magazines. One of the recipes that had intrigued me enough to tear it out was from Bon Appetit; Golden Cashew Curry Brittle. It sounded interesting but when I read the recipe it sounded sort of fussy; requiring a candy thermometer and the potential for the sugar crystalizing if not handled right. Not really something I wanted to explore at this time of the year when time is at a premium.

Suddenly, I had an idea. I remembered an old standby, super-simple, never-fail recipe for microwave peanut brittle. I jumped up, ran into the kitchen and started pulling out a few ingredients; sugar, corn syrup, cashews, butter and baking soda. Oh yeah, and curry.

Ten minutes later, Scott called out from the living room; "What in the world are you making out there that smells so good?

"Surprise!", I yelled back.

"Nope!" I wasn't sure I was going to have success with this crazy idea, so I thought it best to hold off. 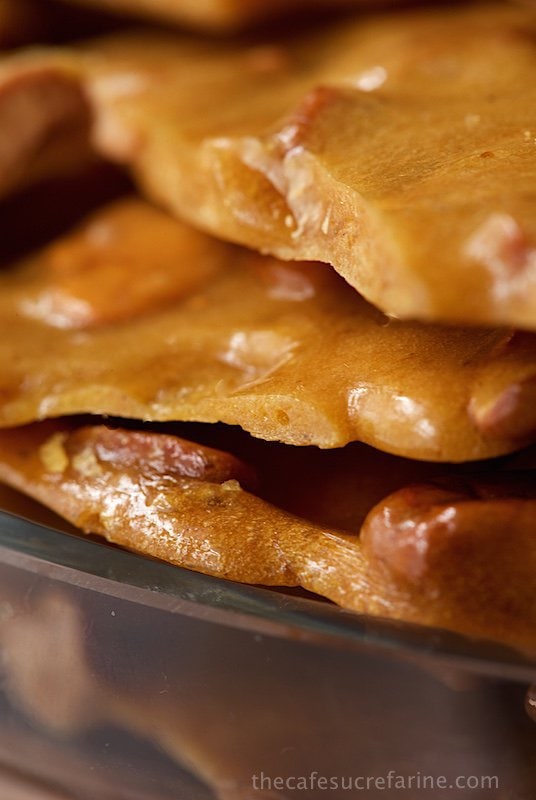 Five minutes later, (honestly, the whole process from start to finish takes less than 20 minutes), I was handing him a beautiful piece of cashew brittle. "What is it?" he asked. 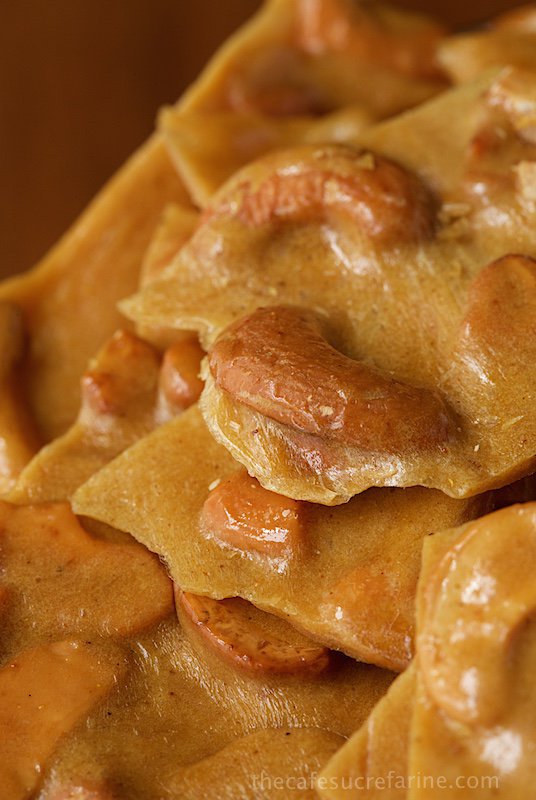 "Easy Cashew Brittle" (I didn't tell him the curry part). He took one bite and his eyes lit up, "Wow, that's fantastic!".

That's what I thought too. And we weren't the only ones. 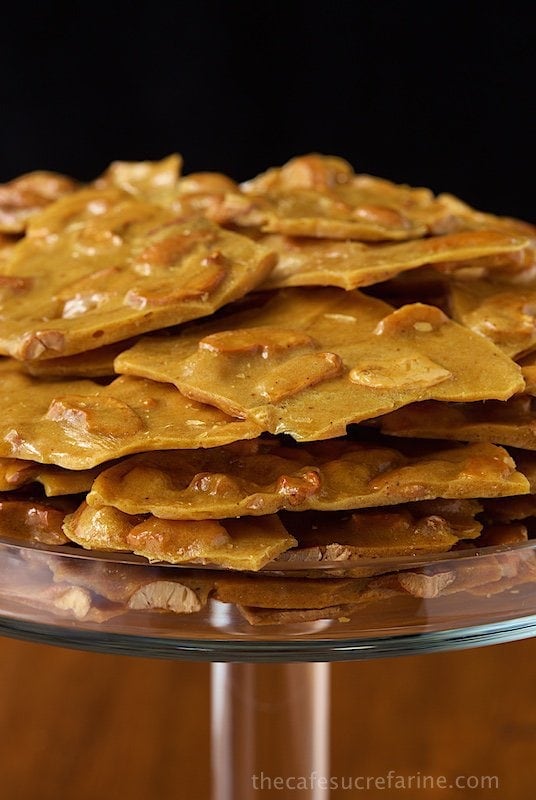 Since then, I've made six batches, getting the recipe just right for you. Of course, I couldn't keep all of that delicious candy around the house so I've been passing it out here, there and everywhere. 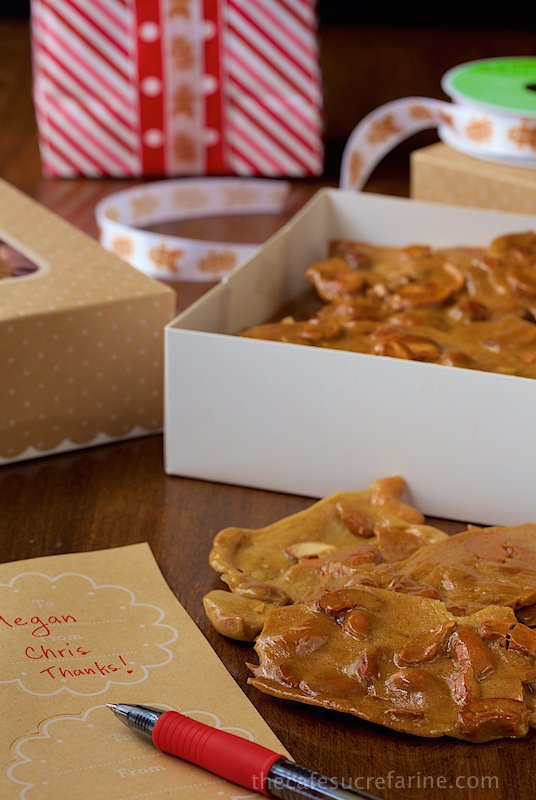 And everyone who's tried it has given rave reviews; even the peanut brittle aficionados that I happen to know.

Curry adds a wonderful, almost imperceptible depth of flavor in combination with the other ingredients. But it's there, and it's fun and it's super delicious.

So if you have twenty minutes to spare, whip up a batch of this amazing, sweet confection. Don't tell anyone the name till they've take a bite. Then they'll be sold and it won't matter what you call it! 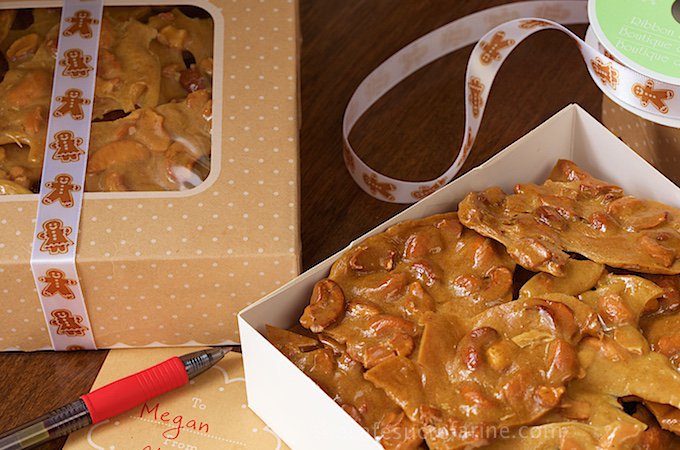 5 from 5 votes
Print
Curry Cashew Brittle
Just like peanut brittle, but way better! A deep golden-hued candy with cashews and a touch of curry which adds a wonderful depth of flavor. Make it in minutes - in the microwave!
Author: Chris Scheuer 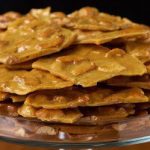 *I buy the cans that are labeled halves and pieces. They're less expensive than halves. I really like the ones with sea salt.