This Easy Black-Eyed Pea Salad is perfect for New Year's - but will also bring rave reviews at picnics, potlucks and family get-togethers!

This fresh, delicious and Easy Black-Eyed Pea Salad is just one more proof that this little Carolina cook is a tried and true southern girl. 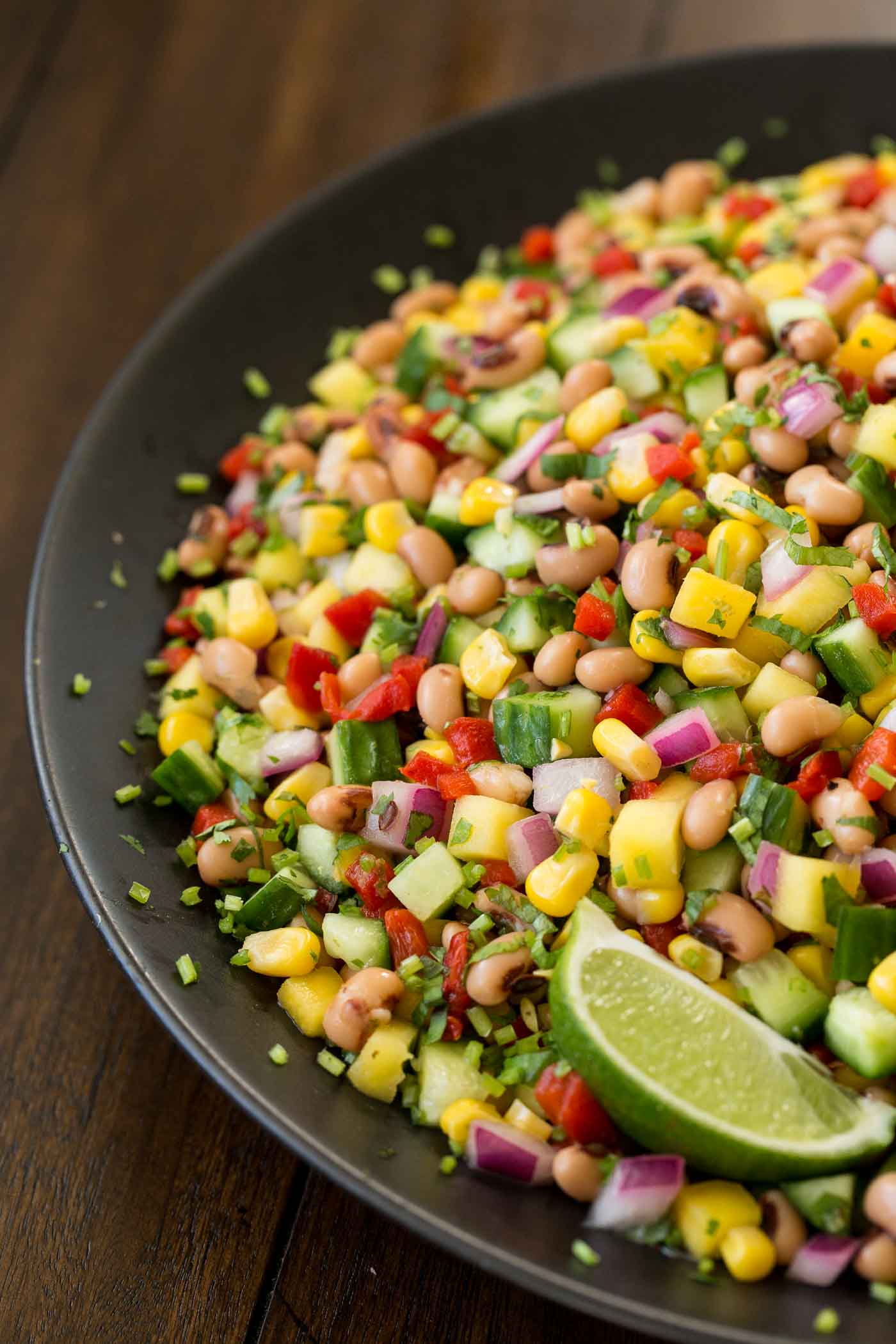 Although we hadn't moved to a foreign country, Scott and I had a bit of culture shock when we relocated, back in 80's, from Wisconsin to North Carolina. There were so many different ways of doing things, saying things and a zillion crazy things those southern folks ate. The flour was different, barbecue was vinegar-based, kids drank sweet tea instead of milk (horrors for a Dairy State girl) and the variety of peas and beans had my head spinning. That's just to mention a few of the anomalies (to us) we encountered.

Black-eyed peas a "must" for New Year's

I quickly learned that eating black-eyed peas for New Year's was a legendary tradition that dated back to the Civil War. The story's told that, during General Sherman's March in 1864, the Union Army raided the Confederates' food supplies but left peas and pork. They thought these rations were for the animals rather than for human consumption. Those supplies ended up as the very thing that got the Southern soldiers through that cold, rough winter. Hence black-eyed peas evolved over the years into a representation of good luck.

Although I'm not a believer in luck, I love culinary history and have joined my Southern brethren in enjoying black-eyed peas as a New Year's tradition. I guess there would be those who would say I'm not a bonafide southerner since I don't serve the customary black-eyed peas cooked for hours with fatback and collard greens; or in a rice dish called Hoppin' John. Instead, each year I enjoy coming up with a simple and healthier way to carry on the New Year's black-eyed pea tradition. 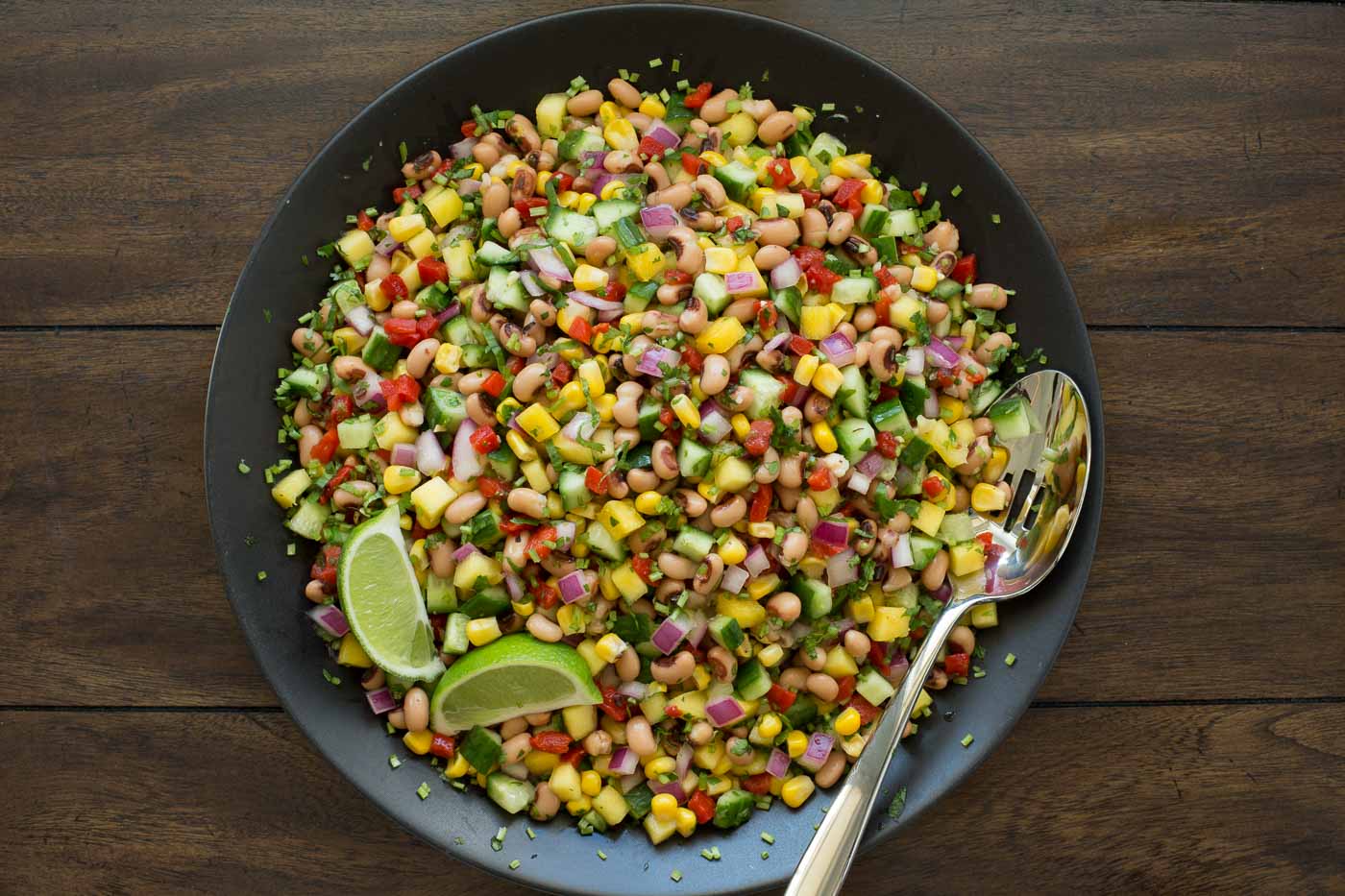 This year's version is an easy black-eyed pea salad with lots of rainbow-hued veggies, all tied together with a super fresh lime-cilantro dressing. It's the kind of fresh, healthy salad you'll find yourself craving and it's perfect, on its own or as a side to sandwiches, soups and entrees.

A bonus with this salad is that it also makes a delicious dip or salsa served with chips or pita. The recipe makes a large batch, but you'll find it will go fast. If there is any leftover salad, it will make wonderful lunches and quick, healthy snacks.

What will you need to make this Easy Black-Eyed Pea Salad? Nothing out of the ordinary. Grab a few cans of black-eyed peas at the grocery store. You'll also need one can of corn (see notes below) and a jar of roasted red peppers. Throw a red onion, a bunch of cilantro, a mango, an English (seedless) cucumber and a bag of limes in your cart as well and you'll be good to go! 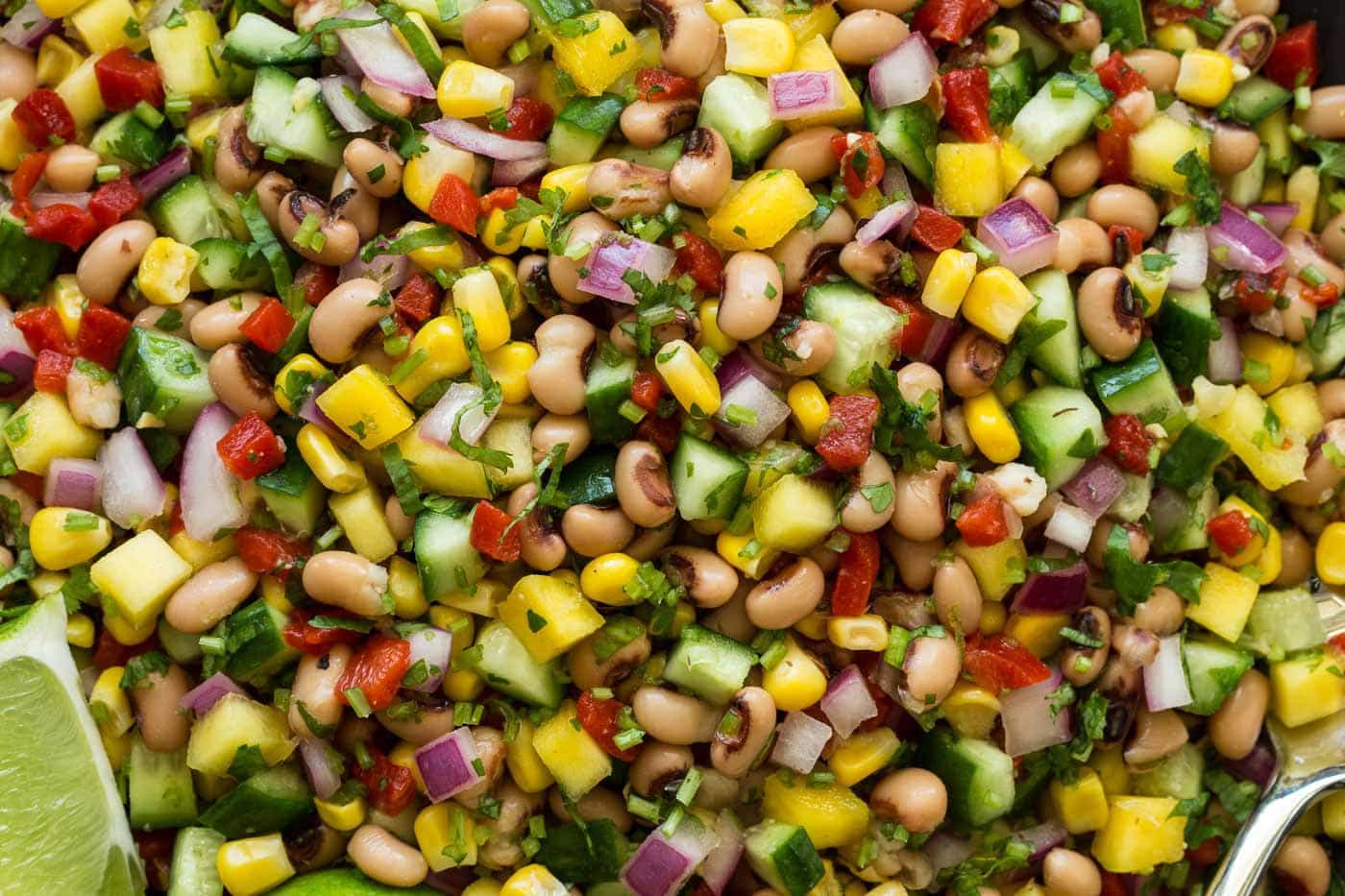 Making the salad is as easy as opening a few cans, doing a bit of chopping and mixing up the super simple dressing. Give the salad a few hours in the fridge before serving and then enjoy. I'm not promising this Easy Black-Eyed Pea Salad will bring the legendary southern-style good luck, but this southern girl does promise lots of rave reviews. 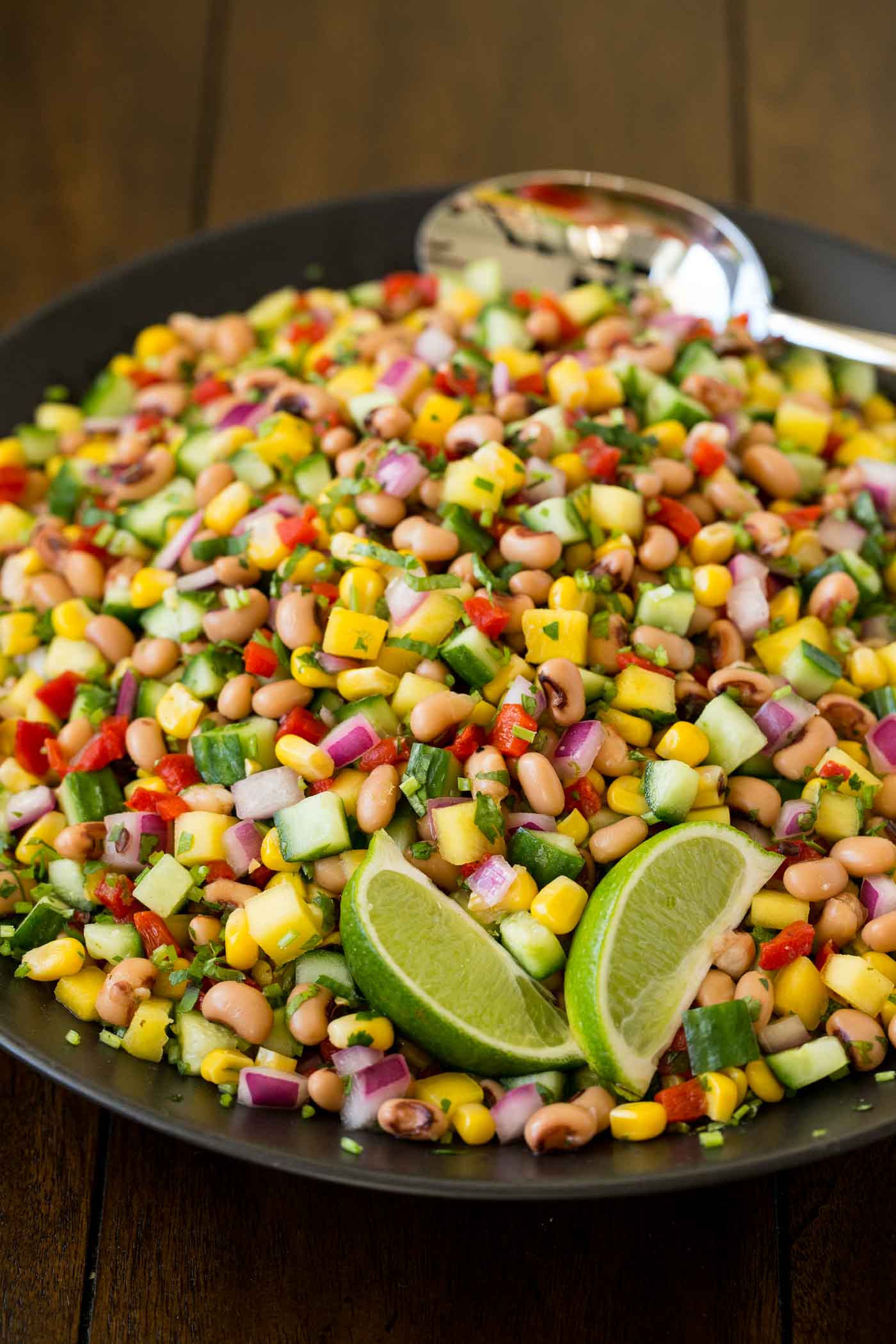 Scott and I want to wish all of you a happy New Year. Thanks for being such an amazing audience to share our life and recipes with. We'll see you all in 2018 - stay tuned for lots of new recipes, tips and stories.

This Easy Black-Eyed Pea Salad is perfect for New Year's - but will also bring rave reviews at picnics, potlucks and family get-togethers, year round!