Who wouldn't love a cookie that's chocked full of two kinds of chocolate chips, pecans and oats? Rumor has it that these I Want to Marry You Cookies are so delicious that they've been known to elicit marriage proposals!

I'm not sure I believe that these I Want to Marry You Cookies will bring proposals but I know for certain that they're some of the very best chocolate chip cookies I've ever made! 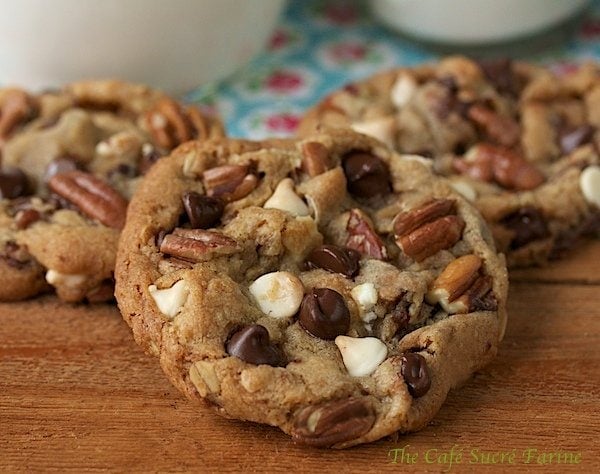 Do you have any traditions in your family that are almost "institutional"? You know, certain established practices that you wouldn't DREAM of missing? That, in a nutshell, is what our "Middle-of-the-Night" parties have become. If you've been a longstanding follower of The Café, you might remember these crazy events, if not, you can read all about them here or here.

With our daughter, her husband and four children living in London, we can hardly wait to make fun, special family memories whenever we have the privilege of visiting each other on either side of "the pond". One of our traditions is these delightful wee hours of the morning rendezvous' that have become almost legendary. We make sure to include one of these celebrations, at an unannounced time, during their visit (and believe me, we are repeatedly reminded about them!). Our girlies love them, but they are also quite magical times for Grammy and Papa Scott.

We ran into a bit of a snag this time, however. It was the last night before their return flight to London, so the girlies had rightly surmised this would indeed be, "the" night for the special celebration. Grammy had mixed up the dough for these yummy, I Want to Marry You Cookies, and had planned to serve them warm, with china plates, candlelight and fancy glasses of cold milk. Papa was all set to document the party with his camera. 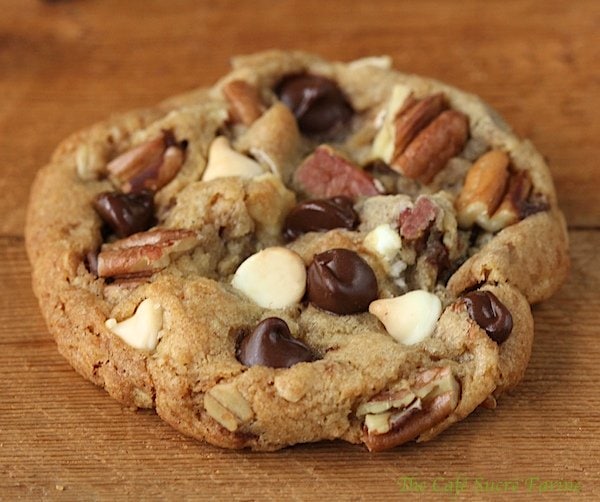 Mum (as British children call their mothers) and Daddy have been wonderful about going along with this silly tradition of ours and we've been careful to make the parties quite short (but sweet). As the girls were put to bed this time, they were admonished, in the usual tradition, "Go right to sleep without a lot of chatting." in order to have the "privilege" of a Middle-of-the-Night-Party.

For some reason, sleep did not come easy, but shenanigans did! Mum warned them once and on the second visit when she found the lights on and the girls playing merrily, she informed them that the "party" would "most likely" be canceled. With Daddy being out of town, Mum discussed it with us and made the wise decision to cancel the party. It was important for the girls to understand the importance of obedience. We were disappointed but supported the decision wholeheartedly.

Disappointment was not even close to describing how the girls felt in the morning when they realized that the WHOLE night had passed without the special party. They came down to breakfast with very gloomy faces and said they both cried when they woke up. That made Grammy teary-eyed, and Mum too, but you know what?

This sad situation resulted in an extremely important life-lesson for our girls. One of the most difficult aspects of parenting (and grandparenting) is setting boundaries and then following through when those boundaries have been breached. Universally, kids will test, test, test to see if "the rules" still apply in every situation.

Contradictory to common thought, when children have secure boundaries and know there will be consequences for disobedient behavior, they feel loved and safe. On the other hand, when the borders are inconsistent and consequences are wishy-washy, insecurity and unhappiness abound. For us "softies" (and that's just about all of us parents and grands, at one time or another) the "easy" path is to capitulate, to give in, to not make waves, allowing children to succeed in getting their way. The result is what here at The Café we call a "child-ruled home" in which both the children and the parents are often quite miserable.

There's a wonderful ending to this tale of woe. When we bid the girlies farewell at the airport today, you'll NEVER believe what they whispered as we hugged them goodbye their last words were; "We'll NEVER miss a Middle-of-the-Night-Party again, EVER! When mum says that it's time to go to sleep, well that's what we'll do".

Parents and grandparents, take heart! Love your kids and your grandkids with every bit of energy you have, but don't be afraid to set limits, to be kind yet firm and to let your word stand on it's own. Your children (and grandchildren) will not only respect you but will turn out to be much happier, more secure and confident individuals. 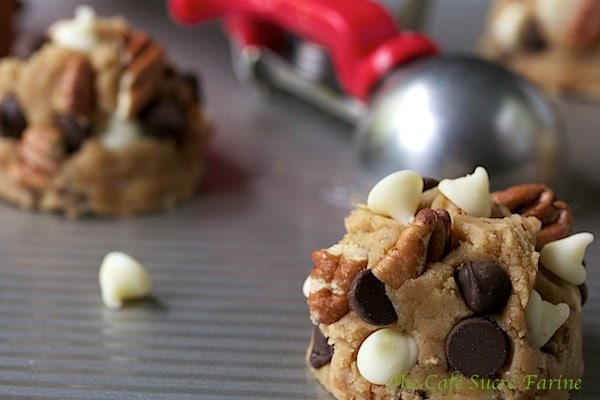 Oh yeah, and the I Want to Marry You Cookies - the girls helped me bake them before they left. I was intrigued by the recipe as there were a few unusual steps. Instead of the traditional method of creaming the softened butter and sugar together, the butter is melted on the stovetop instead. I used my stand mixer to combine the melted butter with the remaining ingredients, but you could also opt to mix it all together right on the stovetop.

The other somewhat unconventional element in the directions is to chill the cookies for 30 minutes before baking. I was a bit dubious (and forever in a hurry) so I tried baking one pan without the stint in the fridge. There was clearly a difference, the unchilled batch having a flatter and less attractive appearance. 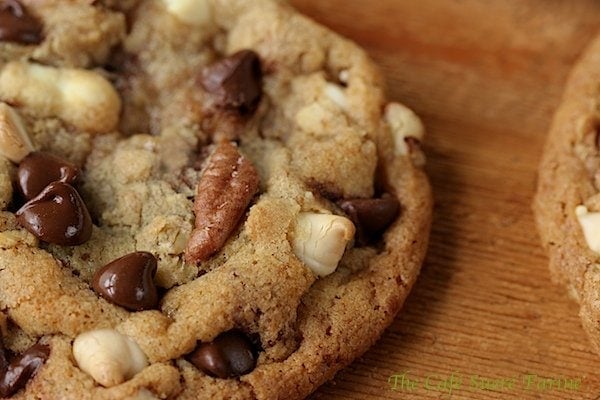 Do you like the name? I Want to Marry You Cookies - I thought it was fun, though a bit crazy. After taking the first bite though, I "got" it. The melted butter combined with a generous measure of brown sugar creates crisp, caramelized outer edges while the centers remain soft and chewy. Toasted pecans add a lovely crunch and a pinch of cinnamon gives the cookies a unique, mysterious flavor. You'll "get" it too - make a batch, they're phenomenally delicious and you might just find your neighbors, friends, family, co-workers, actually everyone who tries them, offering to marry you!

Super delicious cookies, so good, it's reported that they've been known to elicit marriage proposals...

Author: Adapted by Chris Scheuer from The Cooking Channel 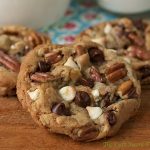 I can't verify this but they say that these cookies are known to inspire marriage proposals. I can verify that they're crazy-good! 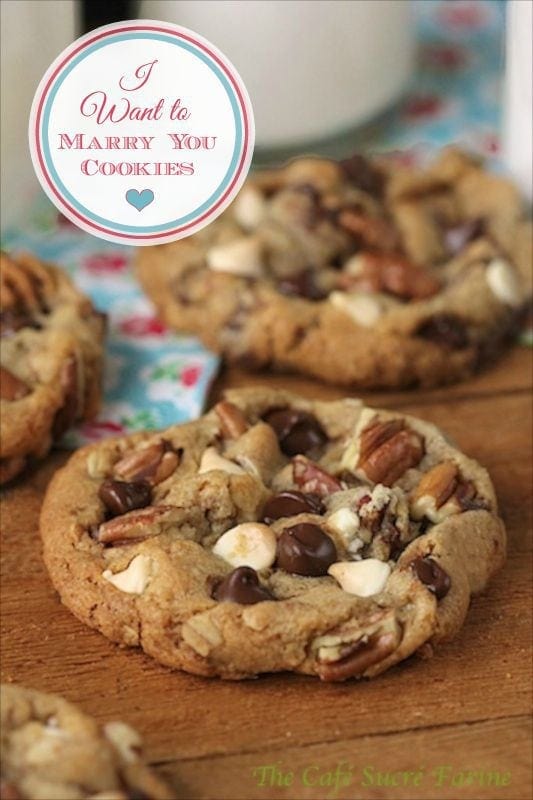