Light, healthy and crazy delicious, this Shrimp and Chicken Pozolé Verde is easy enough for everyday dinners, but it's also great for entertaining!

Have you ever looked forward to something for months in advance? When it finally happens, it's wonderful, but then... s-w-o-o-s-h, it's gone!

My sisters flew into Raleigh from all over the country last weekend and we had a short, but very sweet reunion. There's six of us (including two sisters-in-law, who are just like sisters). Only one sister (sadly) out of the six couldn't make it, which is a miracle in itself, considering the busy lives we all lead. The only problem is, it went way too fast! 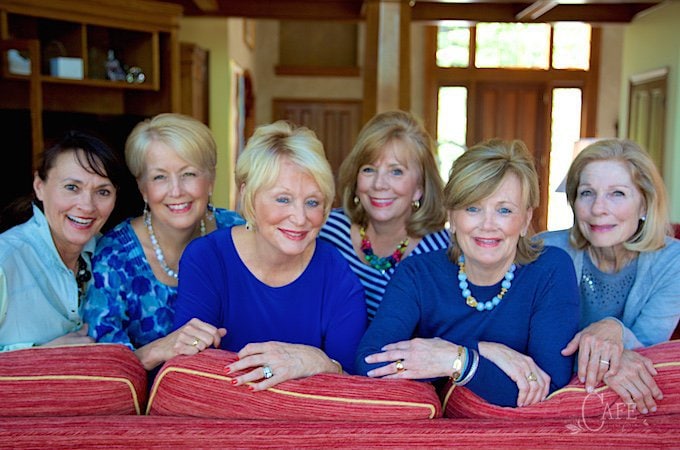 This pic is of my sisters at a get together last June. Believe it or not, we didn't plan what color we would wear! Isn't that just like sisters!

One of many things I love about my sisters is, no matter how long we're away from each other or how many miles separate us, when we reunite it's like we've never been apart. You'd laugh if you saw us all together because we're busy as little bees, talking, laughing, taking long walks, sharing beauty, fashion, and decorating tips, shopping, and reminiscing about the days gone by. Oh, and we eat. We all seem to have an appreciation of good food and love sharing meals together, as well as new recipes we've recently tried. You're probably not surprised, right?

I had fun planning the menus for the weekend. I served some old faithful standby's, but also tested out a few new recipes on the sisters. They are great taste-testers, always very encouraging with their responses, but also honest enough to be constructively critical and free enough to offer ways to make things even better.

One of the new recipes I prepared for our time together was this Chicken and Shrimp Posolé Verde. I knew they'd be traveling a good part of the day to get here, so I wanted something light, yet delicious to serve for dinner. And it had to be something that could be prepared ahead so I could enjoy them instead of working away in the kitchen. This Mexican-inspired soup/stew checked all my boxes!

Pozolé is traditionally made from slow-cooked, shredded pork. Along with pork, classic posolé ingredients include onion, garlic, poblano, and jalapeño peppers, sometimes dried chilies, hominy and either tomatoes or tomatillos. Tomato based pozolés are called rojo (red) and those with tomatillos are known as verde (green).

Did you see the hominy in the list of ingredients above?. It's essential to pozolé, giving it a very unique flavor. Are you familiar with it? If the answer is no, you might be surprised to learn that, most likely, you have eaten it.

Hominy is dry corn that's been processed to remove the hull and germ. It has a delicious, unique flavor and is a common staple in southeastern United States, as well as in many Mexican dishes.

Hominy is dry corn that's been processed to remove the hull and germ. It has a delicious, unique flavor and is a common staple in southeastern United States. It's also used in lots of Mexican dishes. Hominy is also ground into flour which is called masa harina. And guess what? Masa Harina is the primary ingredient in corn tortillas! That means next time hominy comes up in a discussion, you can act like an old pro and say "Hominy? Sure, I've had that lots of times!"

You've probably passed right by it every time you shop at the grocery store. It's right there in the canned vegetable section near the corn. So next time you're at the market, stock up! Once you taste this pozolé, I have a feeling you'll be making it again and again!

It's wonderful that most of the preparation of pozolé can be done in advance. I was up early, the morning my sisters arrived, cooking up a little Mexican storm. All I had to do at dinner time was to bring my pozolé to a simmer, add some jumbo shrimp and within minutes we were gathering around the table. It's quite a complete meal in a bowl! I served some hot cornbread with honey butter and everyone around the table was happy.

There are tons of different versions of Pozolé Verde. I checked out lots of recipes online before coming up with my own version. Some of them call for a fairly long simmer time, which imparts delicious flavor, but also turns the broth into a dull green color. I'm funny about presentation and I wanted my pozolé to have a vibrant green hue. I experimented a bit and discovered that if I simmered the hominy in a bath of chicken broth and waited till near the end to add the shredded chicken and tomatillo/pepper mixture, the beautiful color was retained.

See the fun toppings? I garnished mine with avocado, pumpkin seeds, paper-thin slices of radish and finely chopped cilantro, but sour cream, queso or cotija cheese, shredded cabbage, tomatoes, red onion, green onions, crisp tortilla strips are also popular toppings. These "extras" are often placed right on the table in small bowls so everyone can help themselves.

Scott and I flipped the first time we tasted this pozolé and thought it was just crazy delicious. The sisters agreed and gave it a huge thumbs up. Try it, I think it will get lots of applause at your table too... from sisters, brothers, uncles, cousins, aunts, grandparents, friends, neighbors - anyone who will have the pleasure of partaking. Buen provecho!

P.S. By the way, authentic pozolé does not have corn. I added it because... well just because this little señorita really likes the touch of sweetness and pretty color it gives.

5 from 1 vote
Print
Shrimp and Chicken Pozolé Verde
Light, healthy and crazy delicious, this Mexican-inspired soup/stew is easy enough for everyday dinners, but it's also great for entertaining, because it's almost completely make ahead and so pretty!
Author: Chris Scheuer 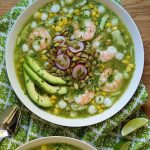 * Tomatillos look like green tomatoes with a papery covering. The covering can be kind of sticky and hard to remove. I remove the covering under cold, running water and it comes off really easily. Start at the bottom and peel towards the top (stem end) then just twist the whole peel off at once.
** Start out with 1 jalapeño and all the other ingredients. Taste and add more heat, if desired by adding the second jalapeño.
*** I really like to leave the skin on the chicken breasts as it imparts great flavor to the broth. It does add a bit more fat. if I have time, I make the broth in advance, then refrigerate it overnight. The fat will have solidified and it can be easily removed, making the soup lower in fat. Then I proceed with the rest of the recipe.
**** Recipe can be prepared in advance through step 4. Cool and refrigerate broth mixture, tomatillo puree and shredded chicken separately. 20-30 minutes before serving, proceed with recipe, starting at step 4.