Home » Ballymaloe - Behind the Scenes

Ballymaloe is a cooking school in Shanagarry, Ireland but it's way more than that! It's also a self-sustaining, 100-acre organic farm and the birthplace of the farm-to-table movement in Ireland. Check out Ballymaloe - Behind the Scenes.

A few days ago, I shared A Magical Week at Ballymaloe Cookery School, chronicling the 5-day cooking course I took at Ballymaloe in Shanagarry, Ireland. While I was cooking my little heart out and learning lots of new recipes and culinary tips, Scott spent a good bit of time photo journaling the farm, gardens, glasshouses and beautiful grounds. He's sharing his side of the week in this post, Ballymaloe - Behind the Scenes. 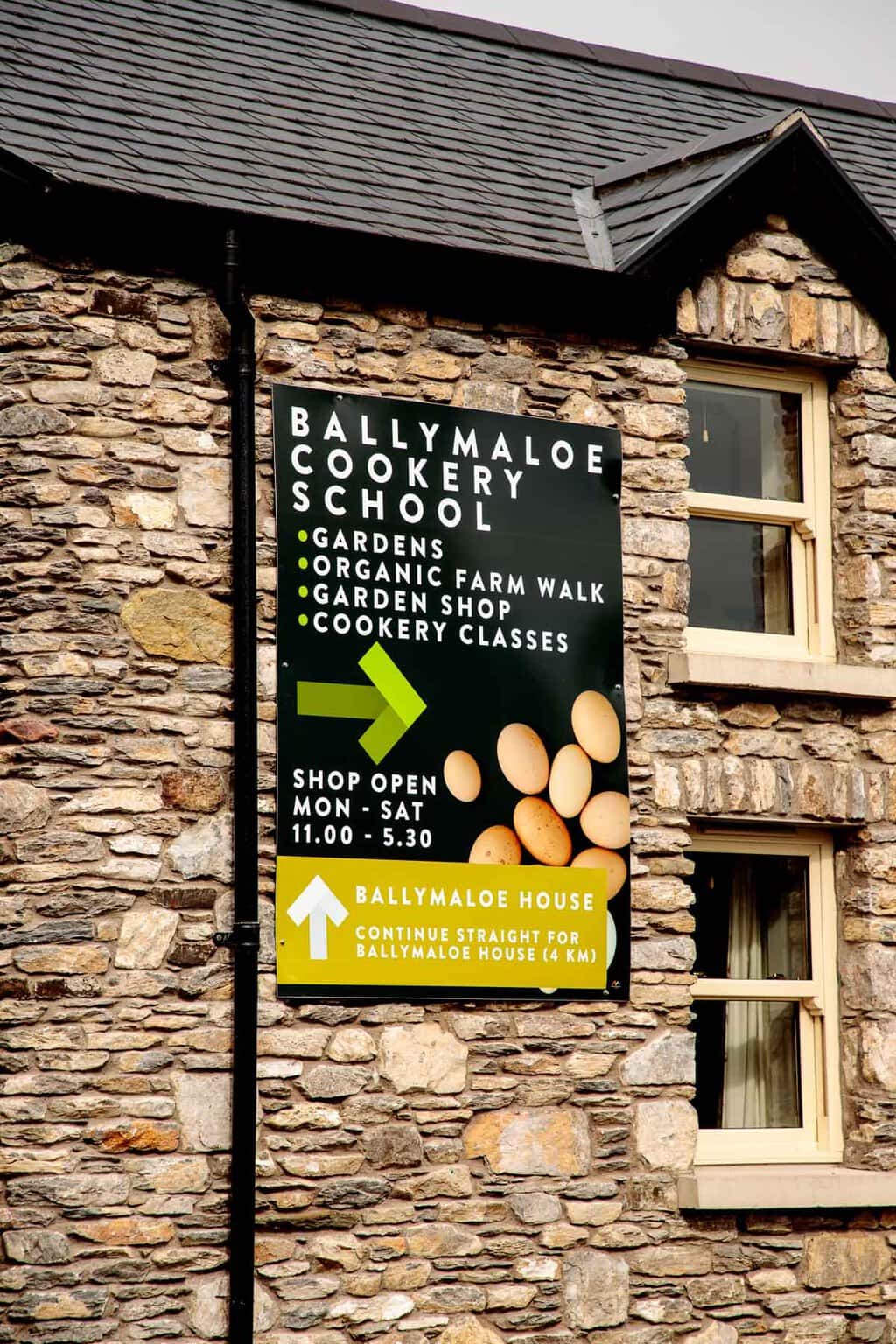 Ballymaloe - Behind the Scenes 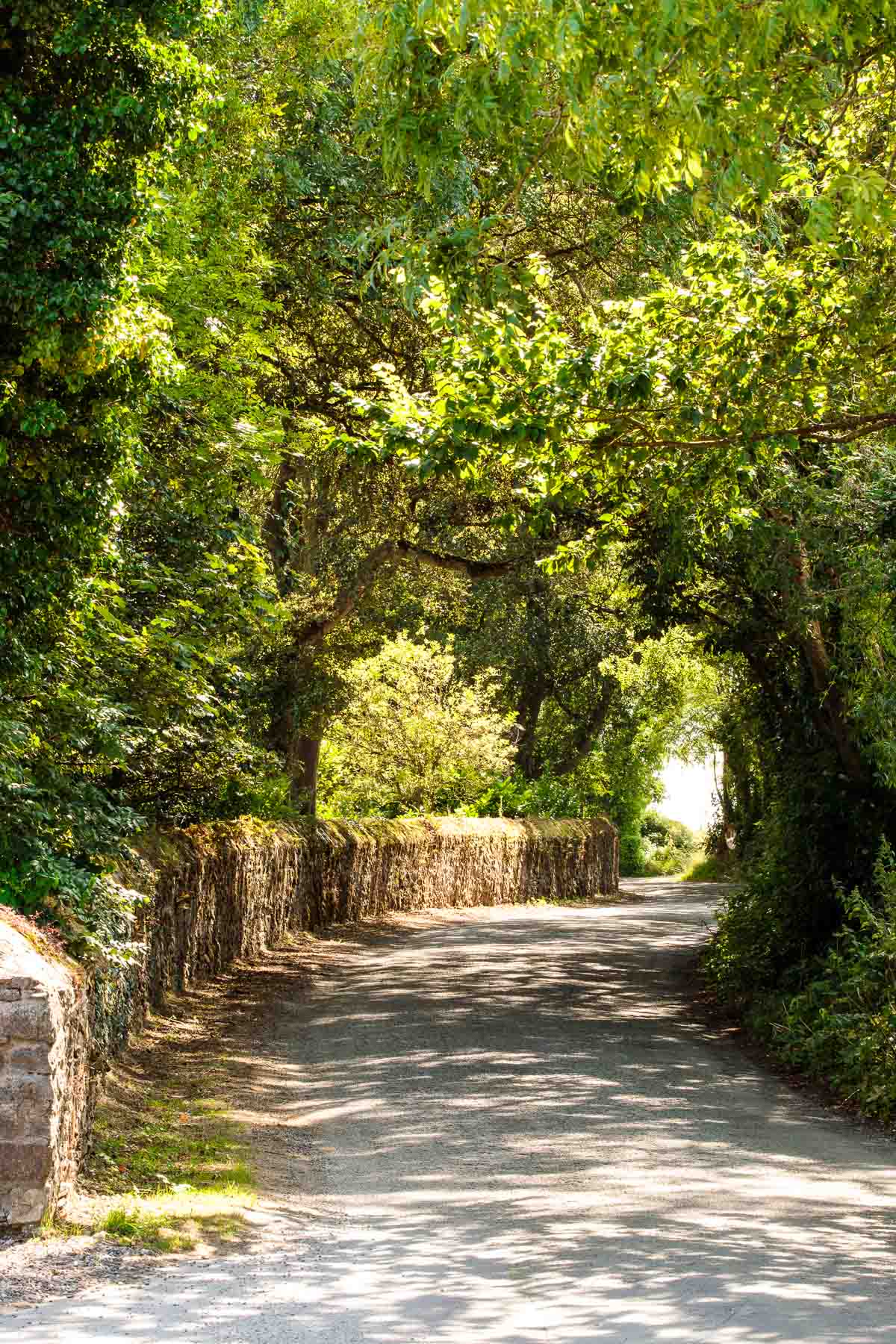 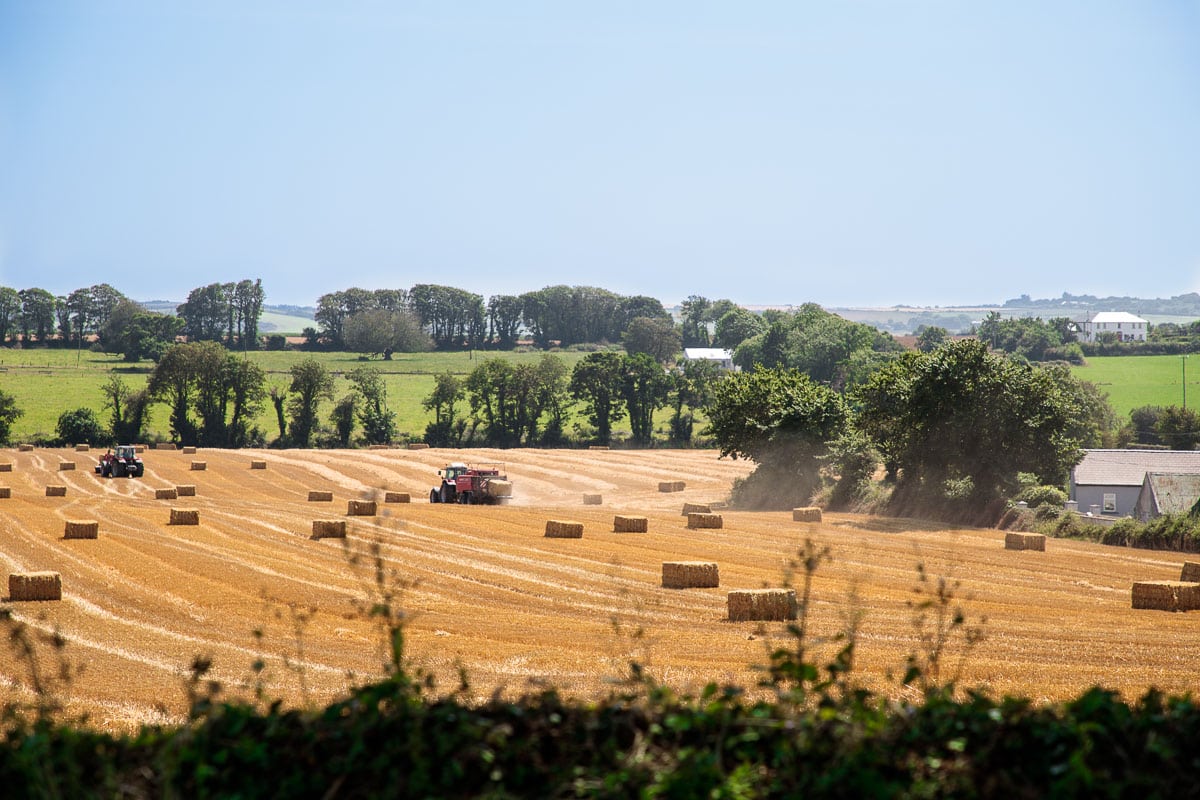 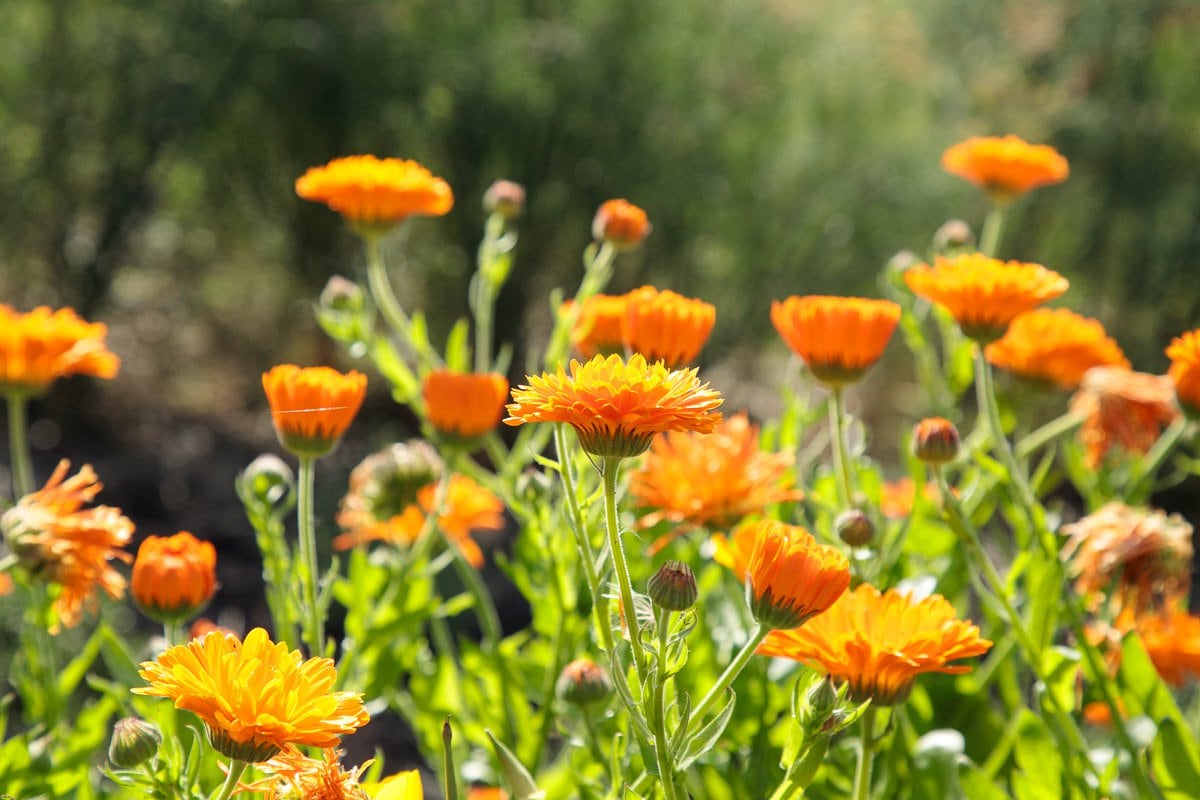 4 kilometers down the windy narrow farm lane is the sea....the Irish Sea to be exact. With a sturdy lighthouse perched on a little adorable green island - just off a stone and moss-covered cliff dropping straight down into a deep emerald sea... seagulls gliding everywhere and then, suddenly, diving straight down into the deep to pick up a fresh seafood snack to eat. 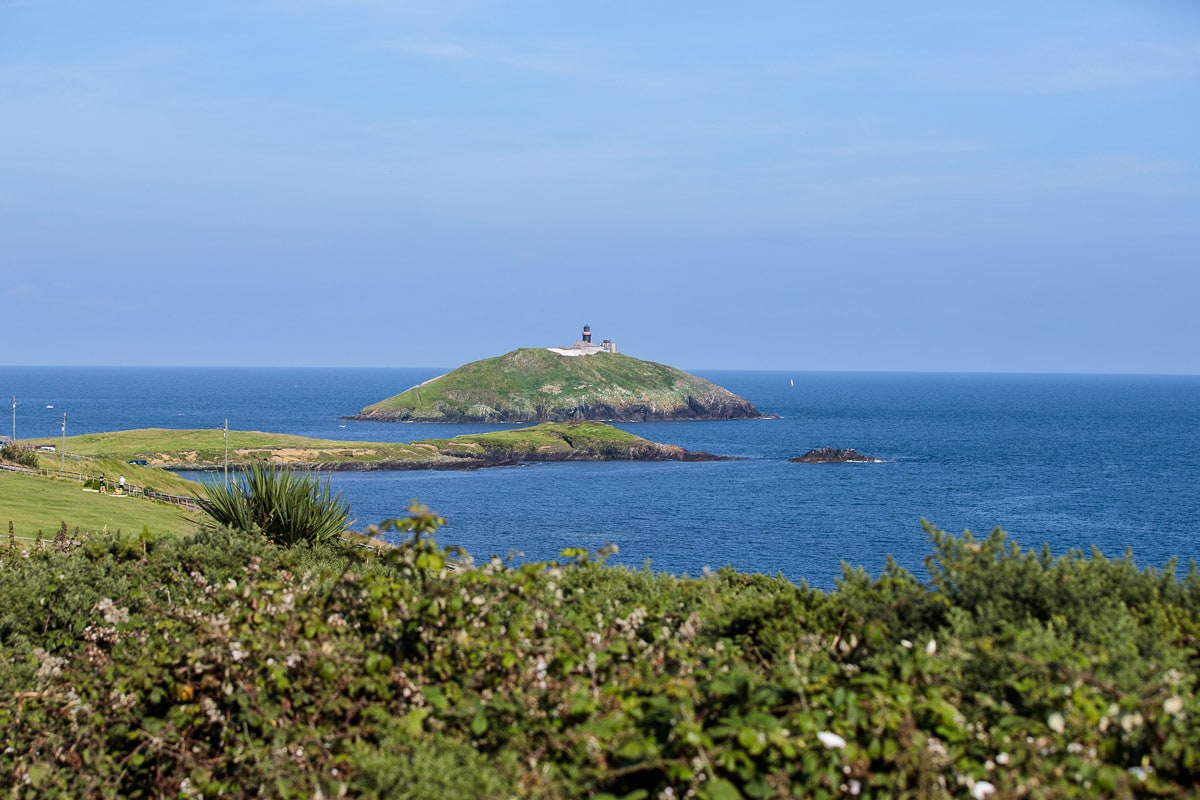 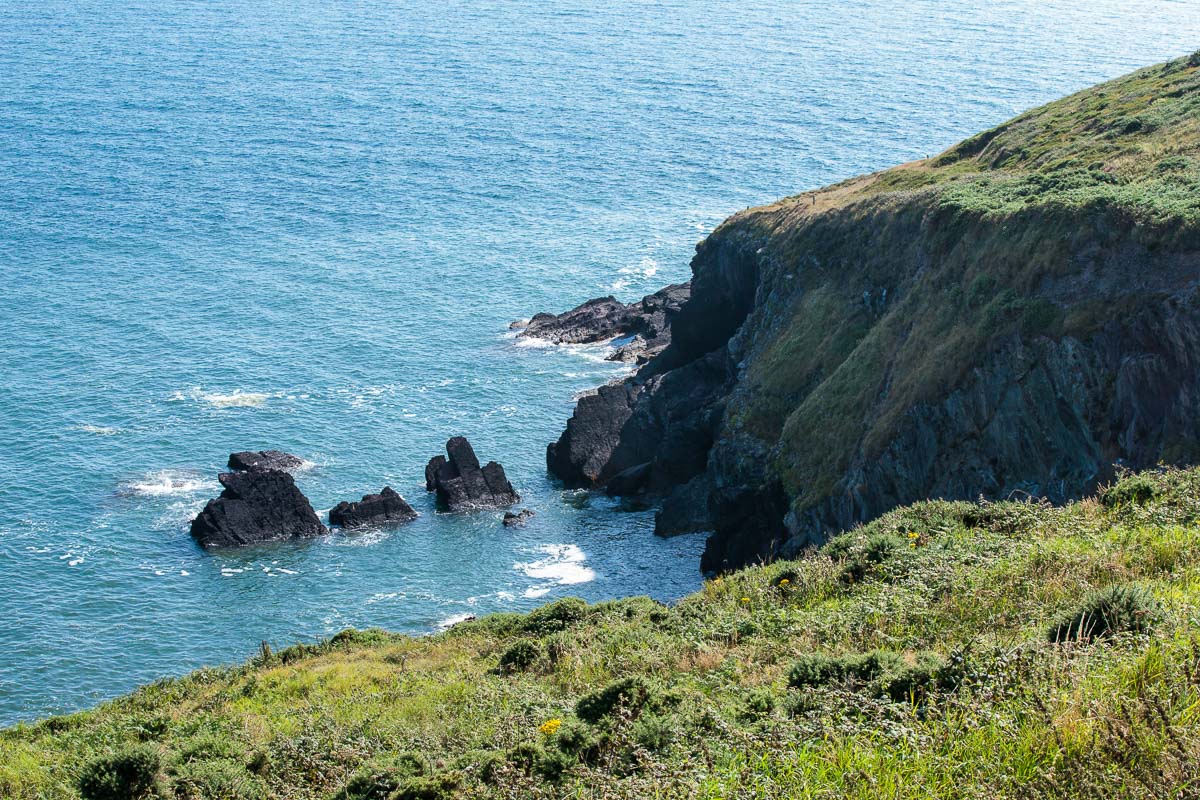 A week at Ballymaloe for food lovers is like a week in heaven - it’s almost indescribable!

And then there are the people of Balllymaloe - salt of the earth, beyond friendly, helpful, honest, sincere, funny and lovers of life... 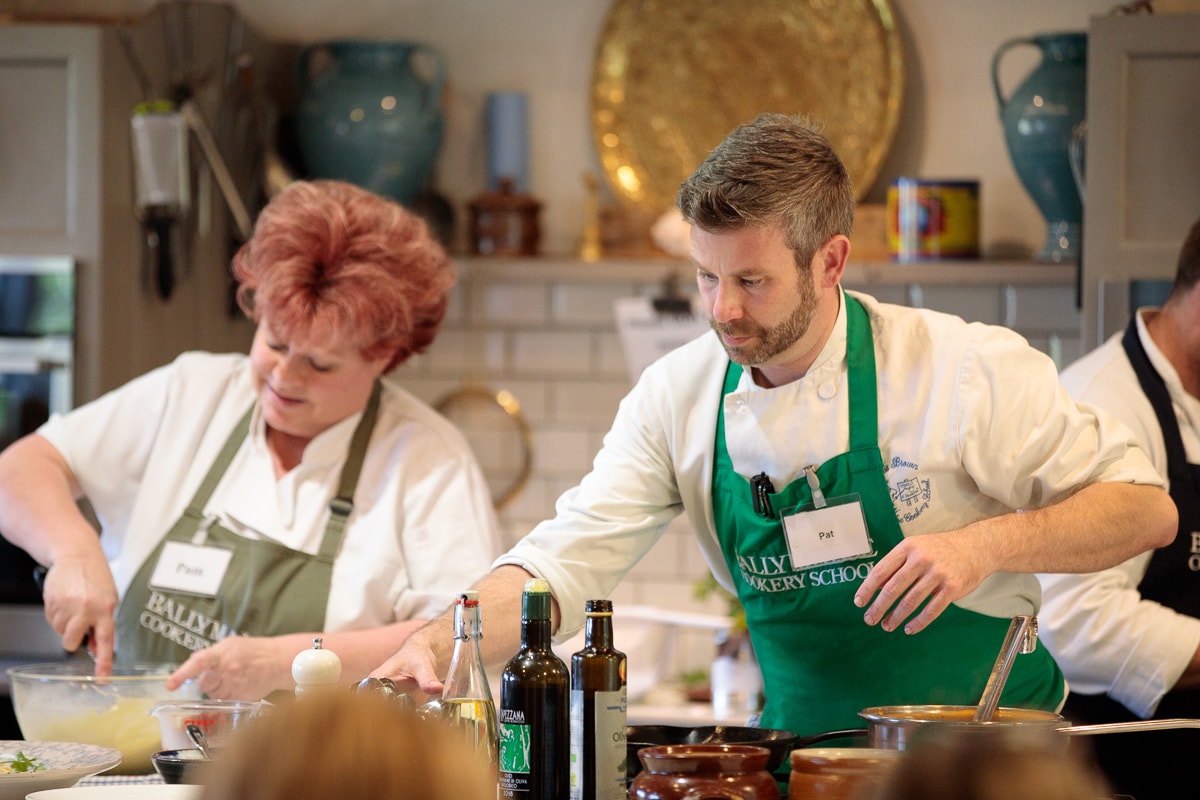 The Ballymaloe Cookery School and farms can be described in words and visited in pictures, but to truly experience it there is no finer way than to spend one day, a week, a month attending one of their myriad of courses, designed for young and old. 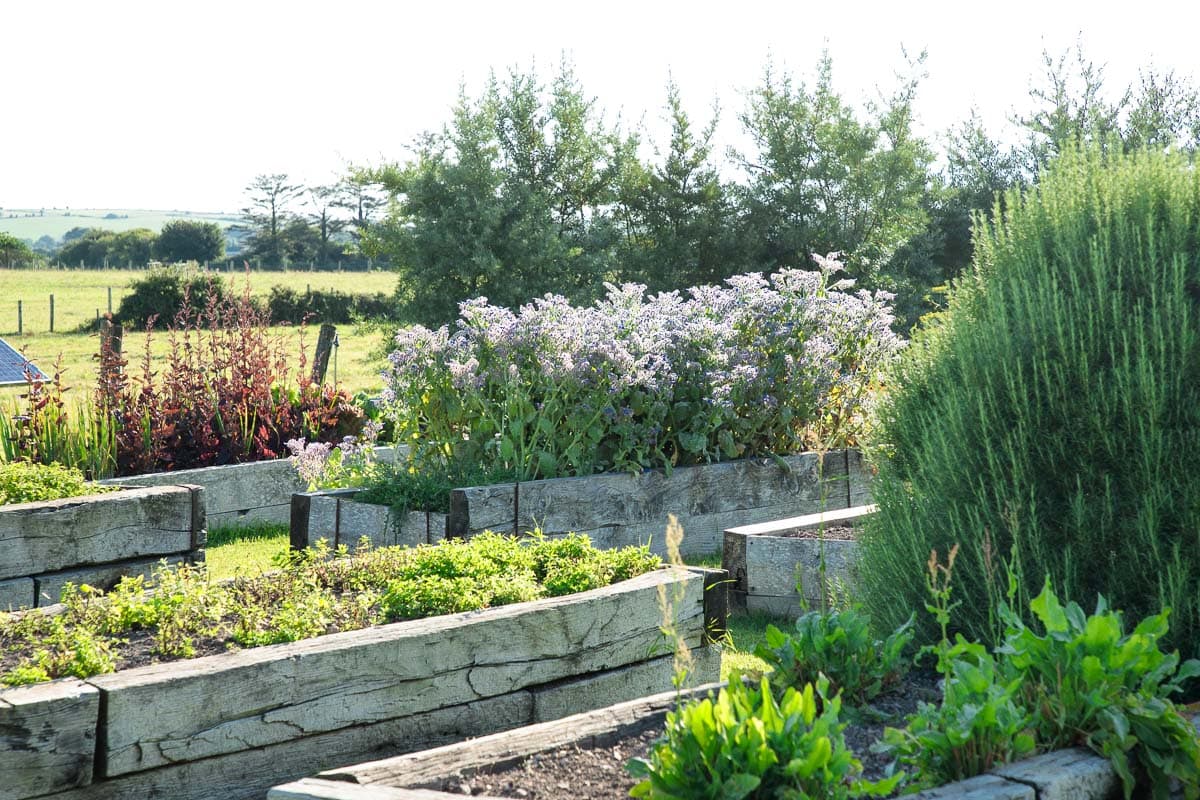 Supporting the school is the Ballymaloe farm that makes this school so successful. While Chris was reveling in her week of cooking and culinary training, I had the remarkable opportunity to document what happens every day, behind the scenes - the support mechanism and people who make Ballymaloe a one-of-a-kind foodie experience! 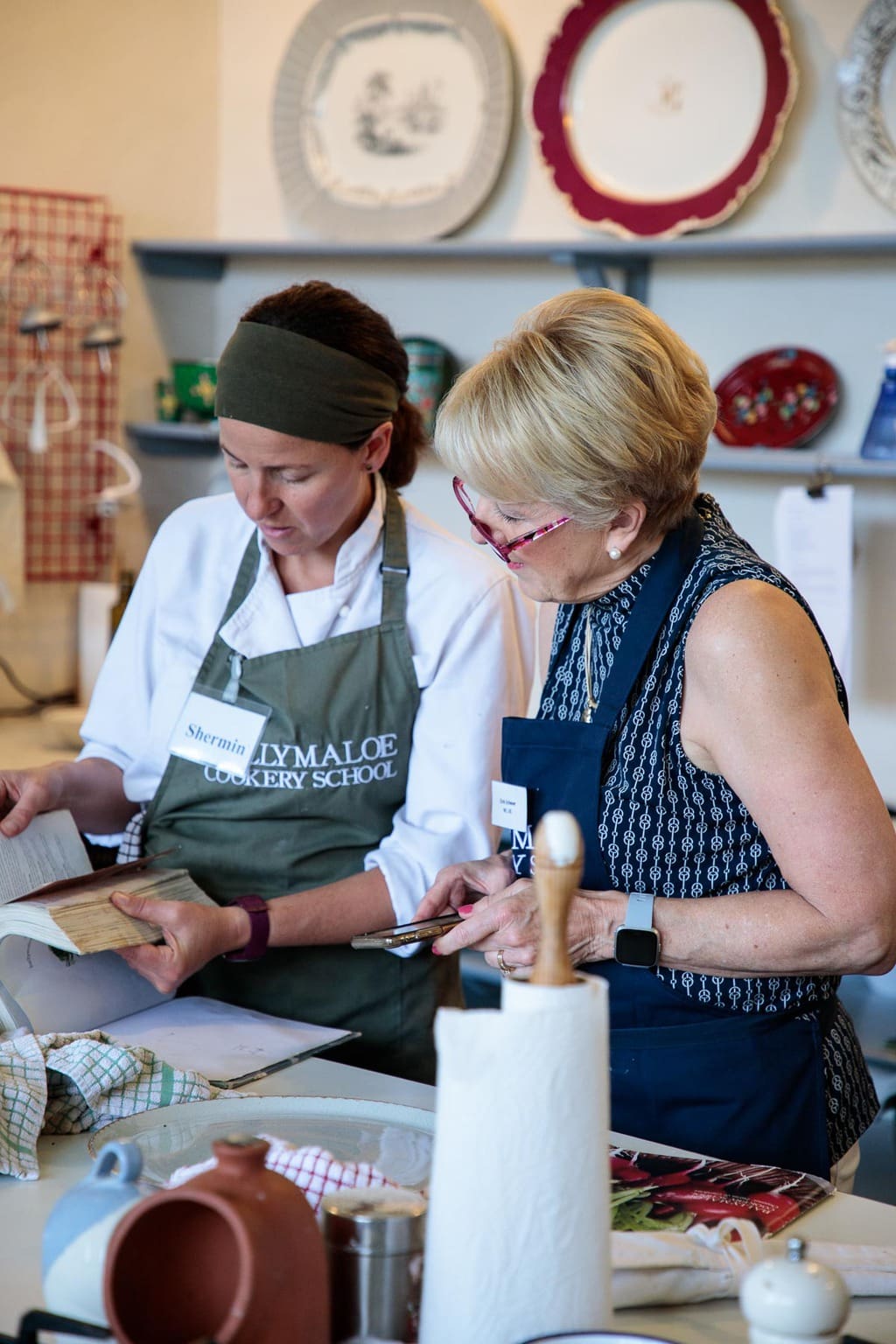 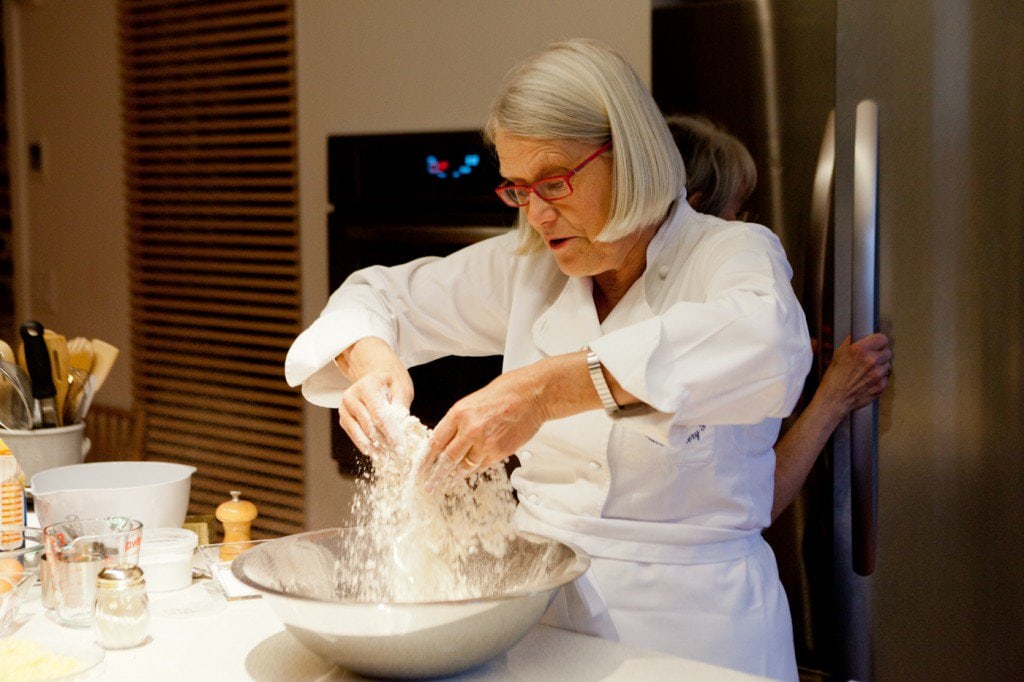 The farm is directly behind and surrounding the school, so there is a constant beehive of activity from early morning to evening. Workers bringing in vegetables, eggs, milk and everything that this farm produces into the kitchens for the staff and students to turn into the delicious recipes this place is known worldwide for. 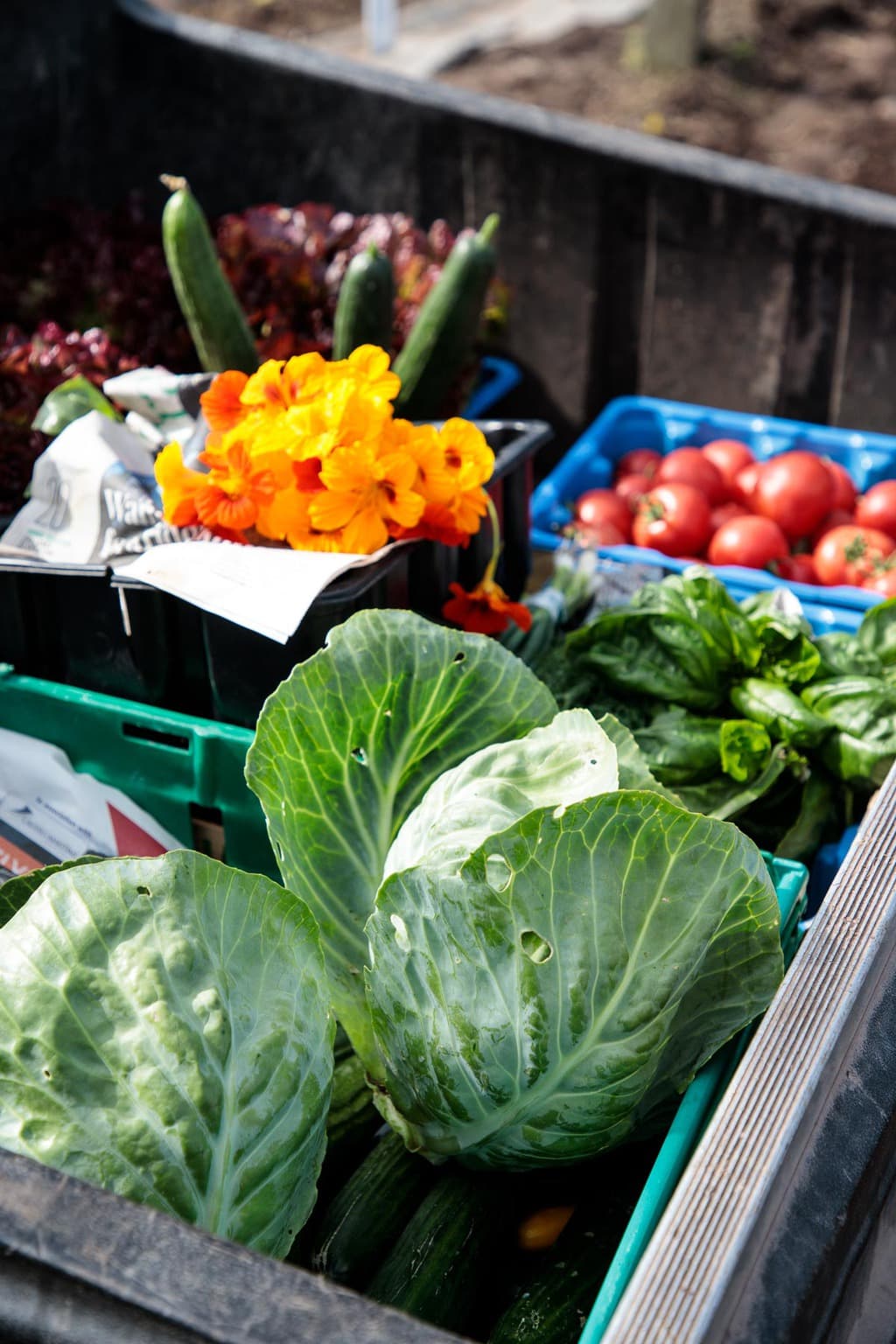 Ballymaloe - Behind the scenes in the milk house

Each morning a group of Ballymaloe’s Guernsey cows are lovingly milked by staff. These docile, sweet animals are way smarter than you think! They come in each morning, knowing what order to get milked in, all in a line, waiting to give their “gift”.

Kitchen workers are there to pick up the fresh still warm milk, some raw, for use in the school cafe and classrooms. And, oh my, it's deeeelicious! 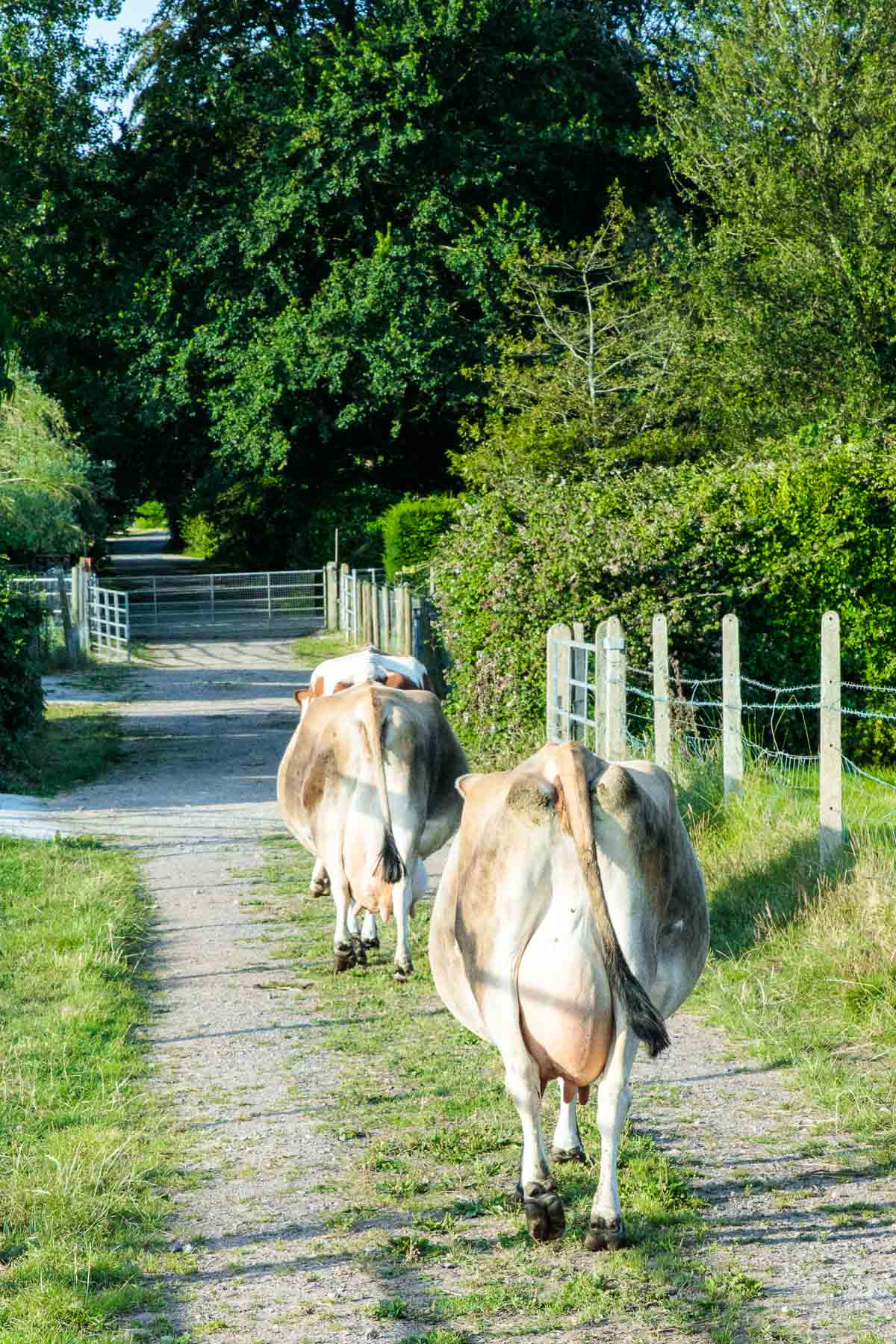 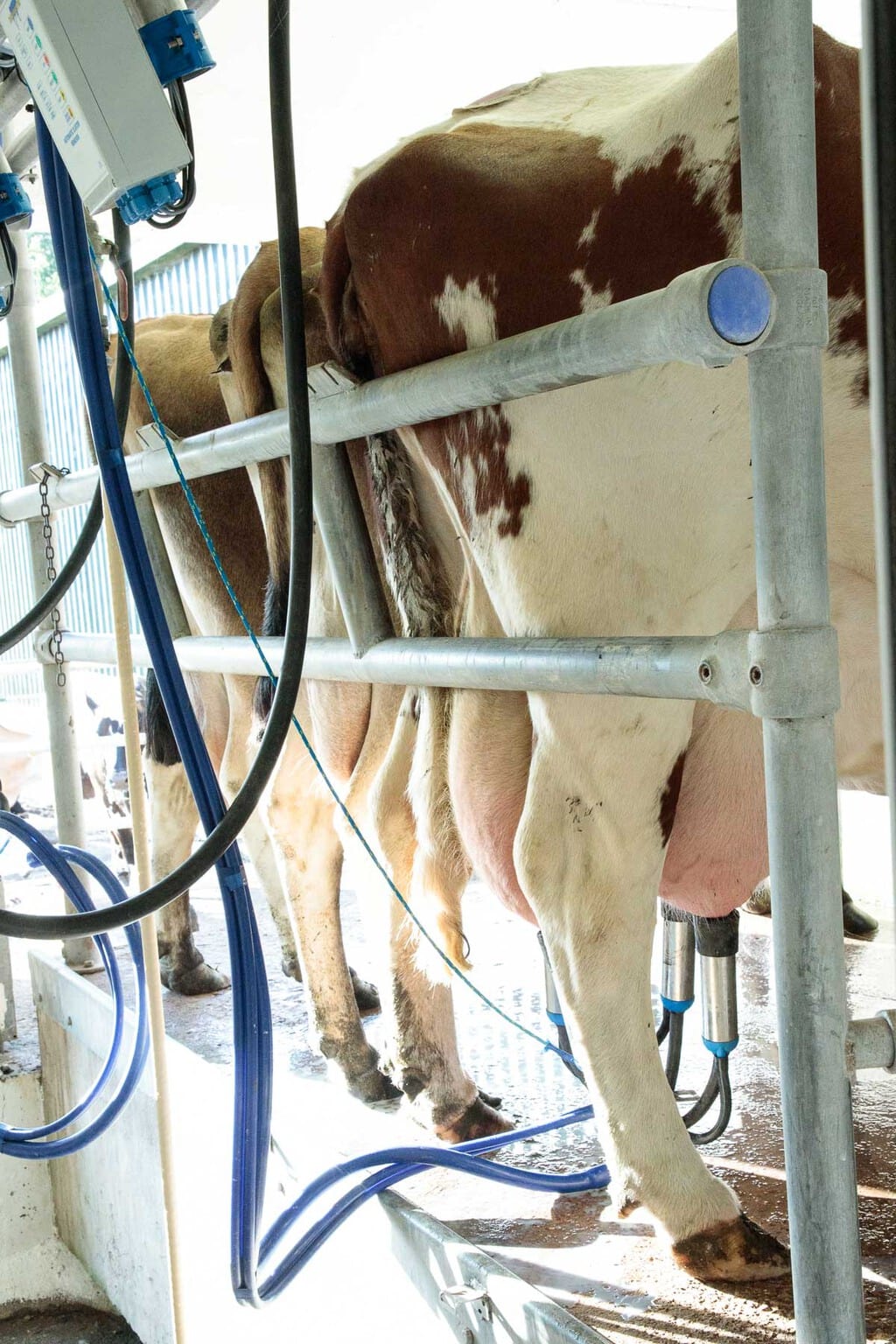 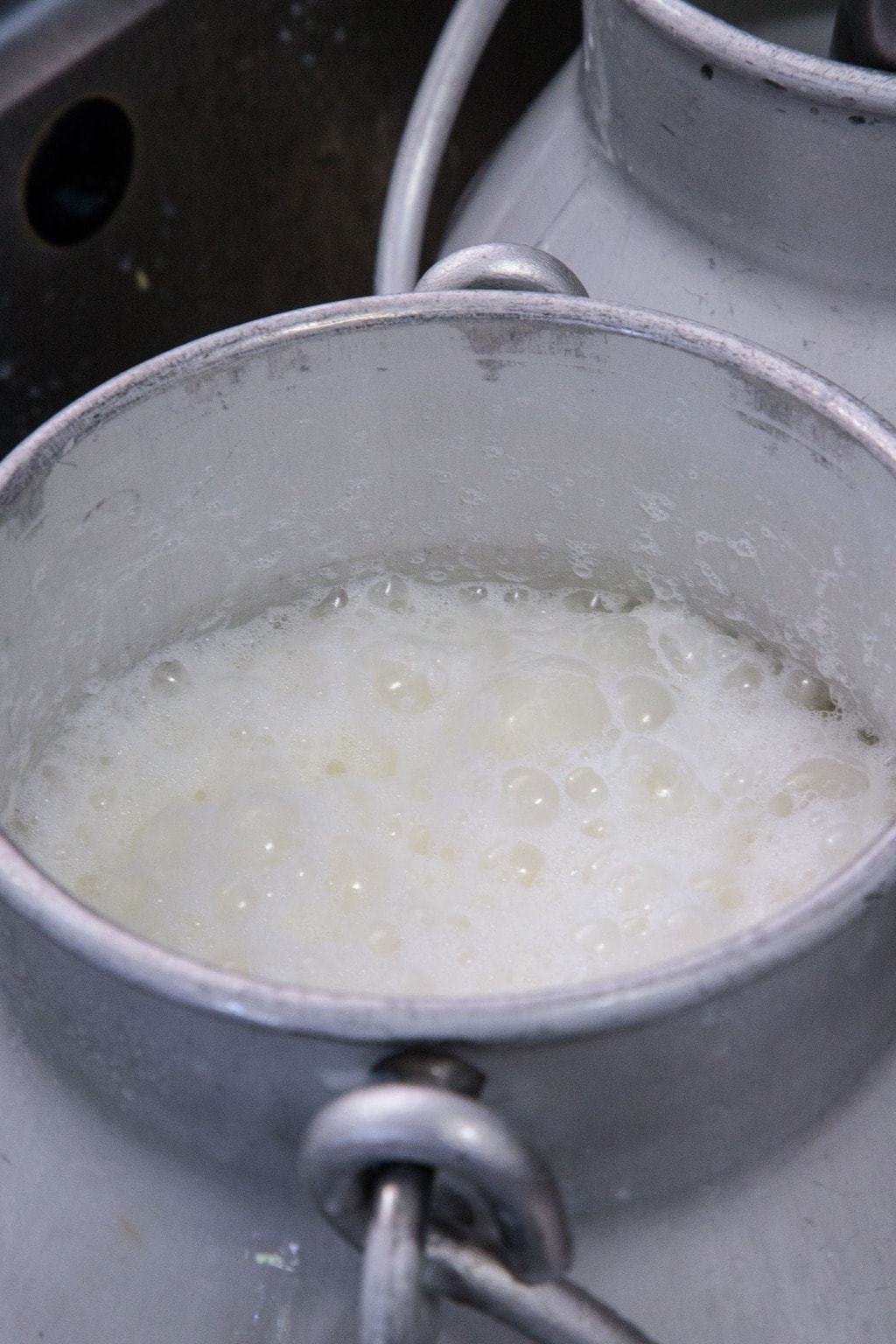 In addition to the milk cows, Ballymaloe produces cattle for beef. Although you don’t see them as much as the milk cows, they are instrumental for providing a constant source of meat for the kitchens. One of the strongest messages that Chris and I took away from the whole Cookery School experience was how well they respect the land and their animals, both great and small.

Growing up in Wisconsin and having relatives who farmed, I always thought a chicken was a chicken, was a chicken! This week at Ballymaloe sure changed that! Large, small, fancy, plain. Some dressed up like they were going to the prom! These girls (and boys) produce so much for the farm, eat the table scraps, keep the bug population down and generally amuse the visitors! So much fun! 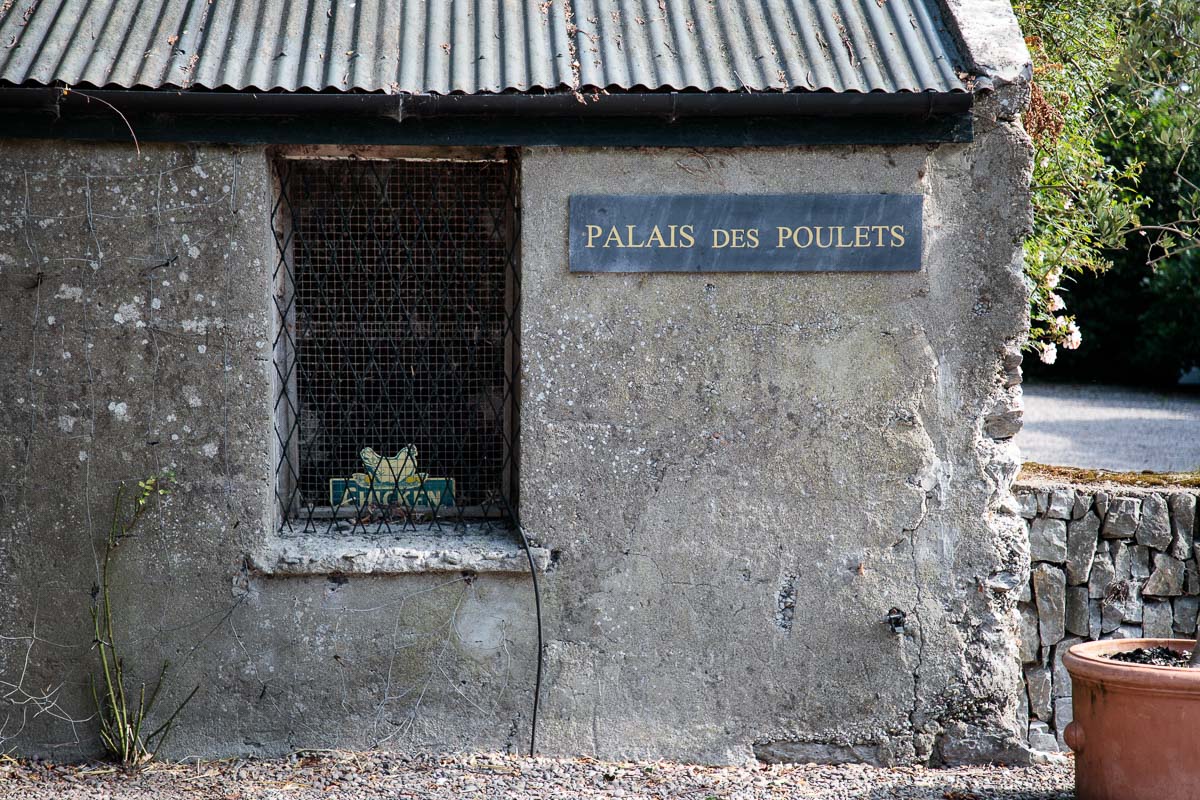 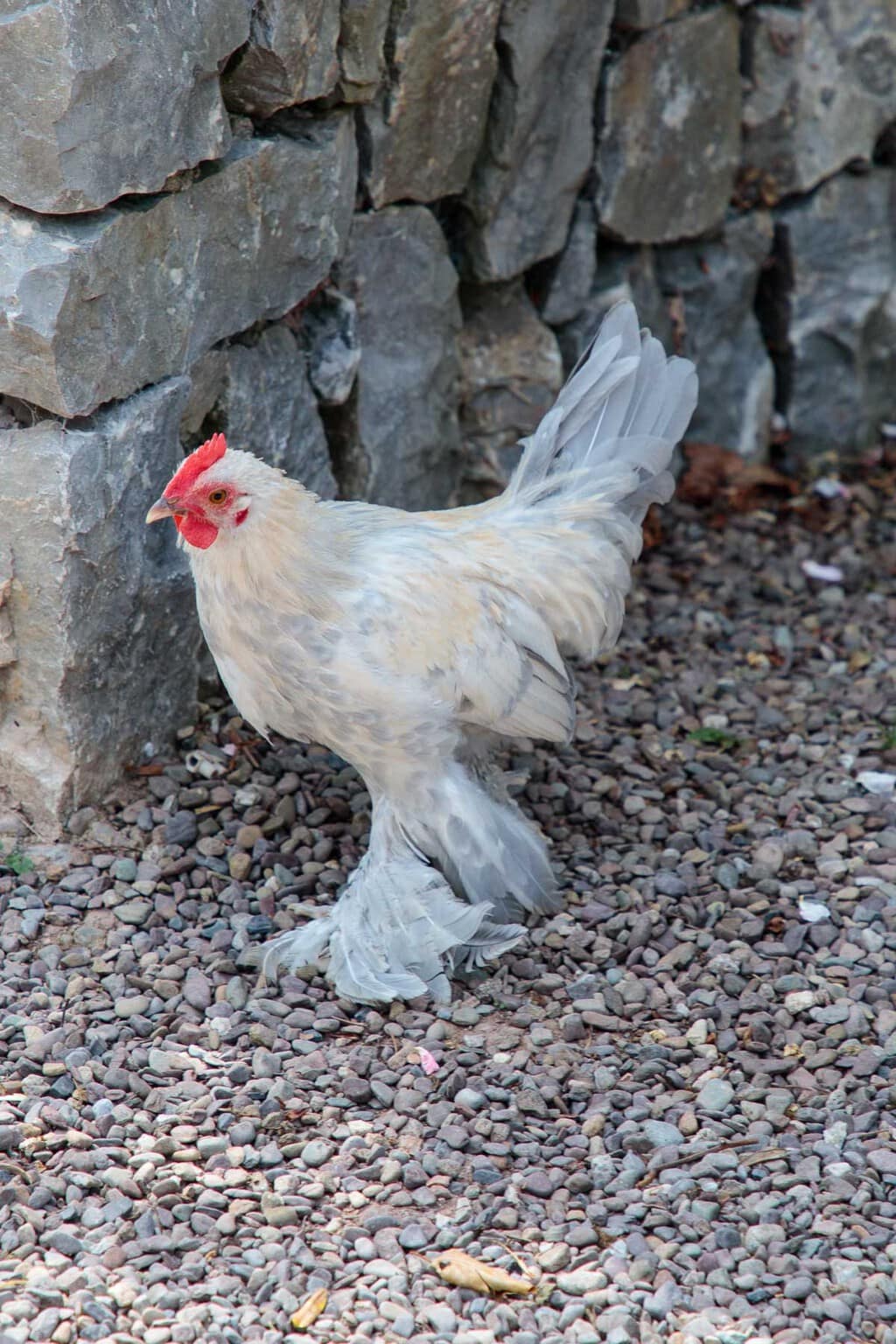 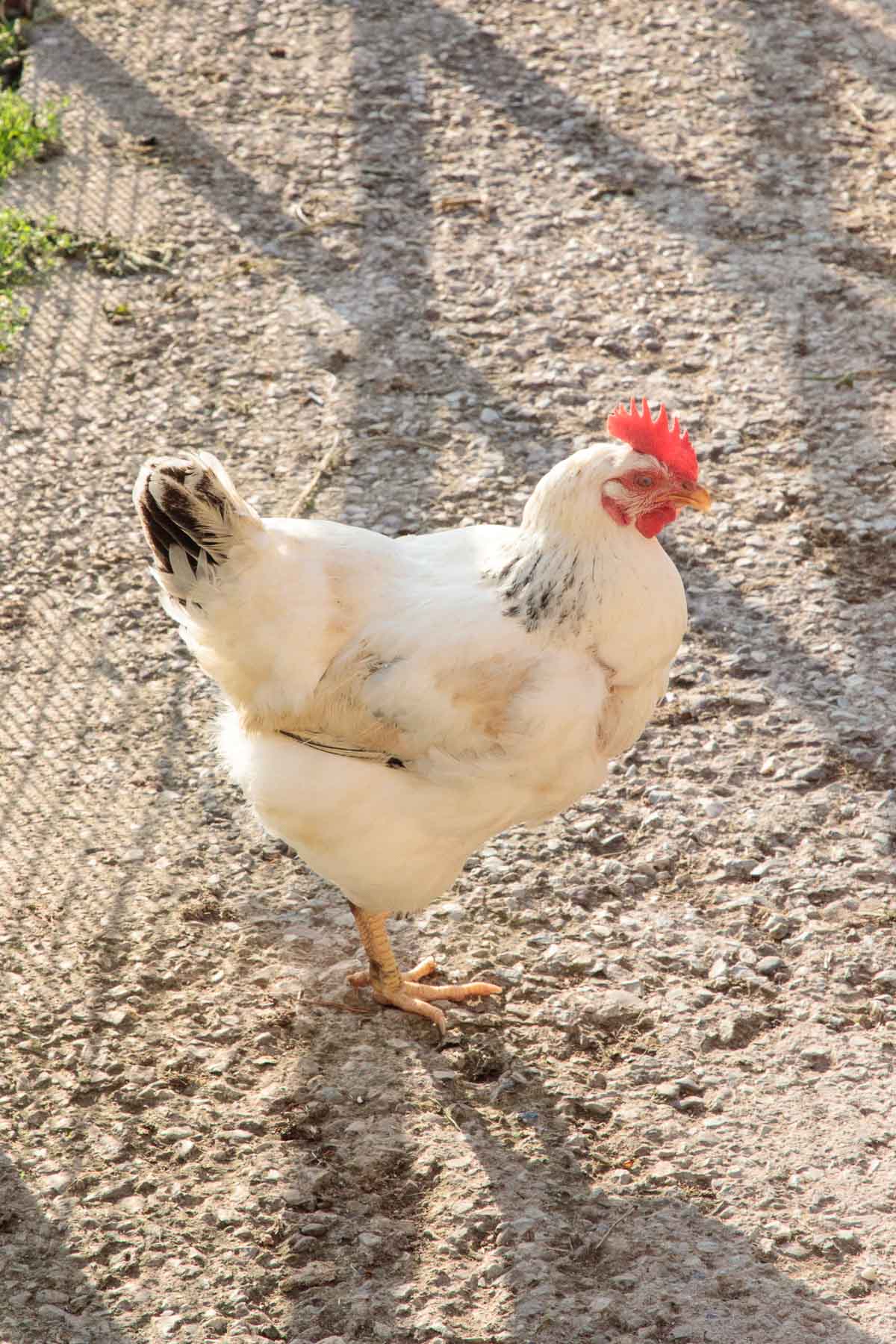 Ballymaloe - Behind the Scenes in the pigs' pen

I ran into these lovable characters one morning on my way to the Ballymaloe Glass Houses. They were “snoozing” very comfortably in the tiny concrete area by the feed trough. They didn’t seem to mind that I was clicking away, turning them into international celebrities, as they peacefully grunted their approval. 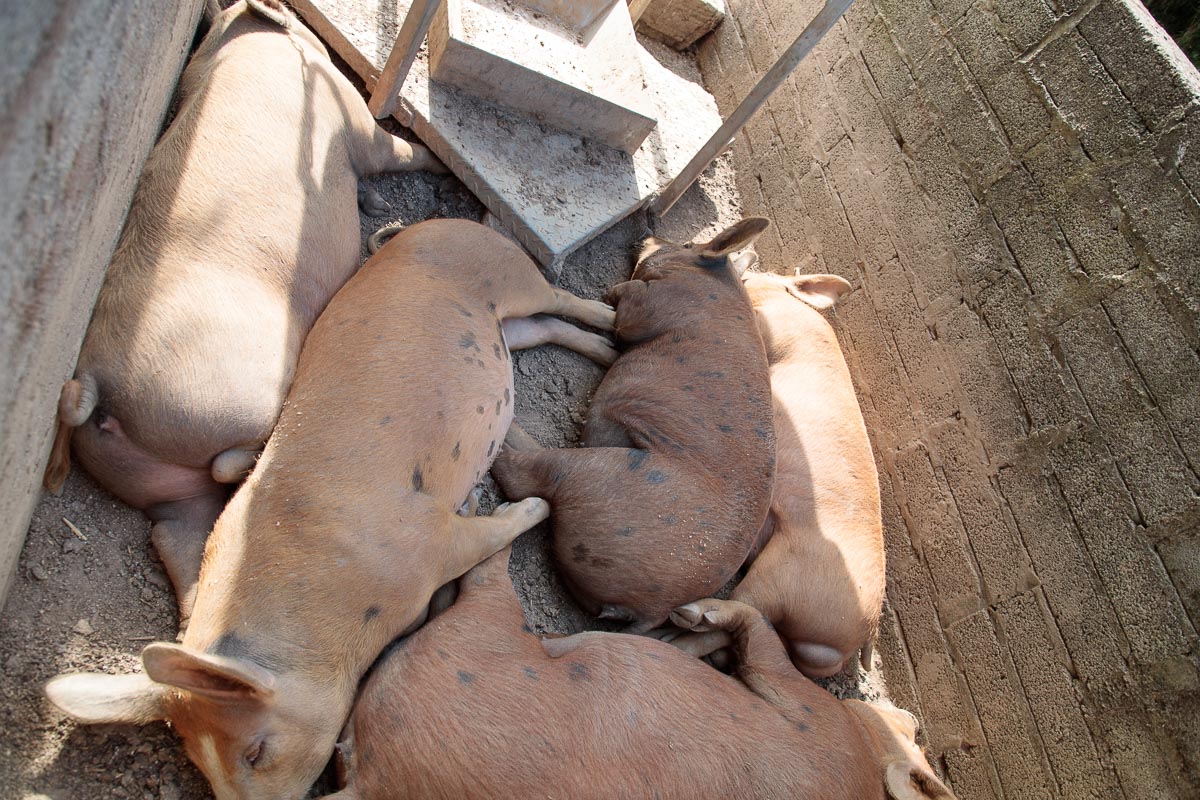 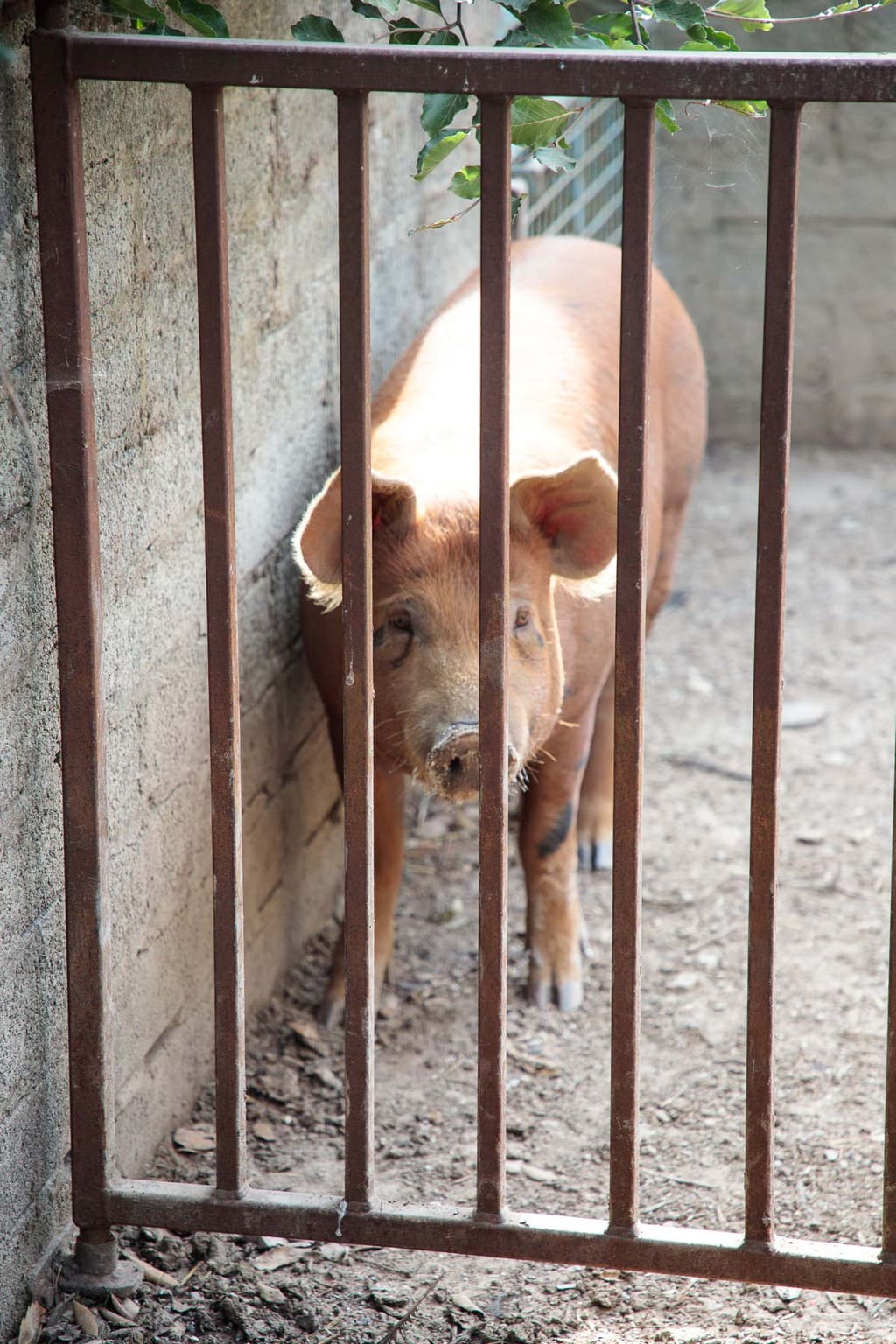 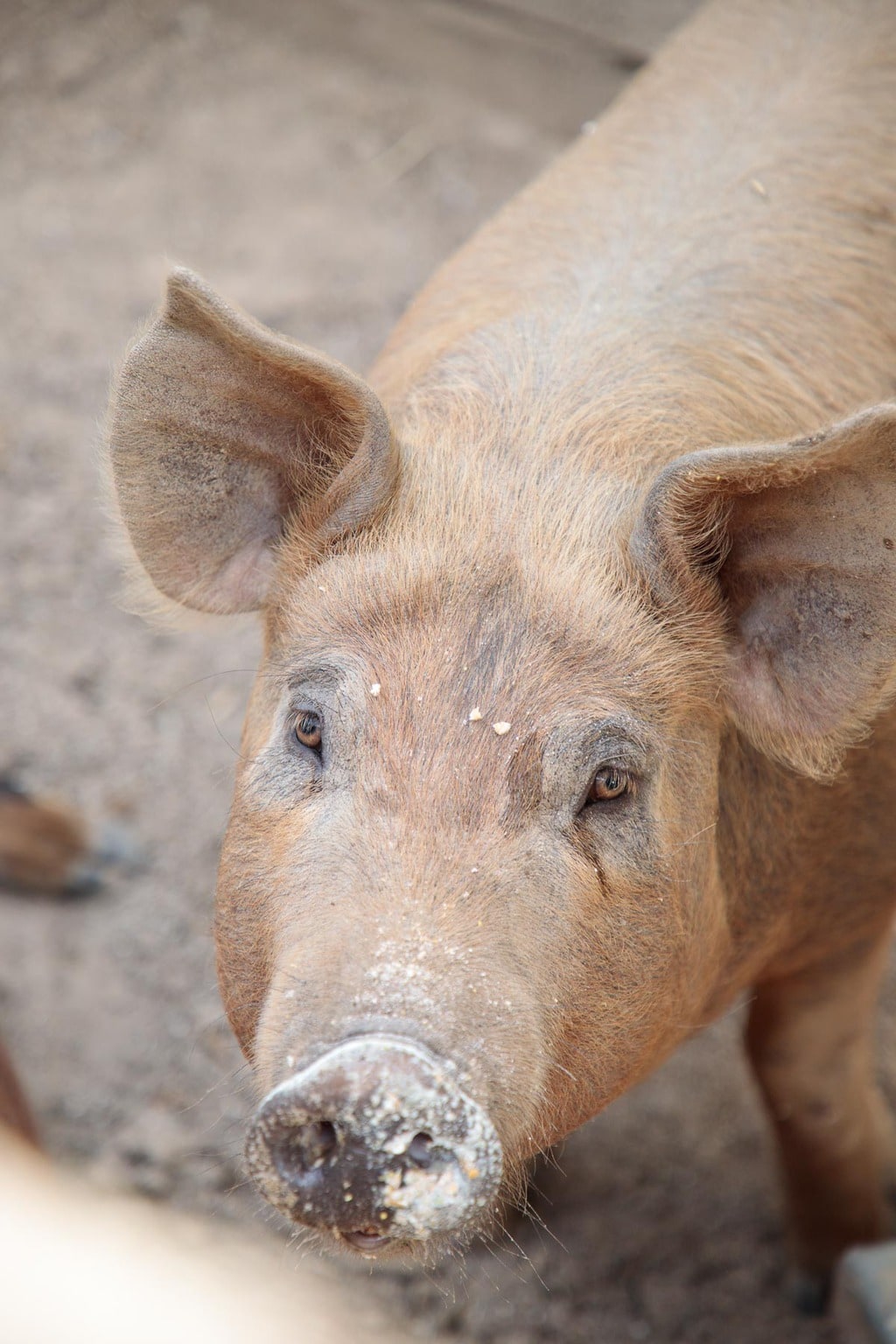 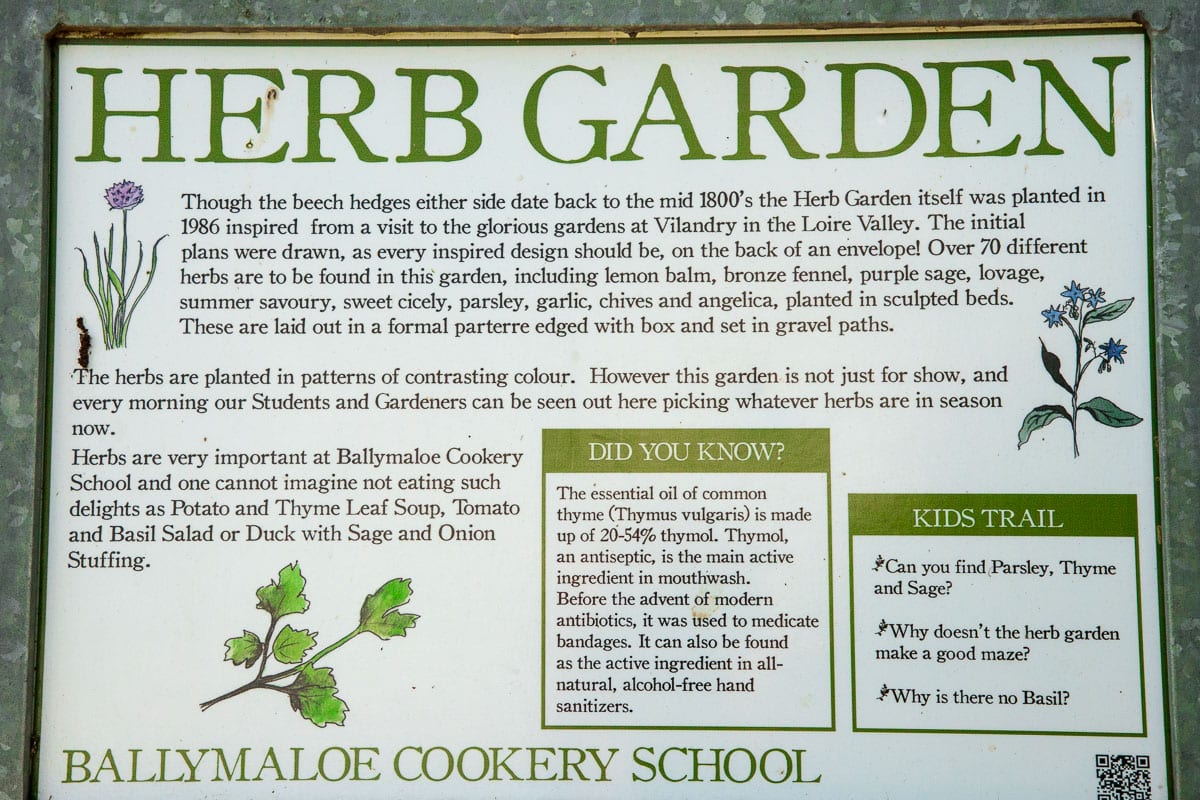 The Ballymaloe herb gardens are simply stunning! They are situated close to the school and kitchens, so staff can quickly get something incredibly fresh for their latest creations! Some, designed as formal gardens, are just a beautiful sight, with bees and butterfly’s happily doing their daily business, oblivious to a nosey camera man’s presence. Again, the emphasis is on organic, healthy ways of producing nature’s bounty.

Carefully ensconced in bird “resistant” netting is the school’s most precious jewels, Black and red currants, blueberries, raspberries, strawberries, and blackberries are prized possessions for these little rascals. One of the men who takes care of this part of the farm told us that the birds are always testing the “fortifications” by pecking the nets until they find a weak spot and gain access! Party time! By the next day, the workers have patched the up the “door” and the birds are on the outside looking in, once again! 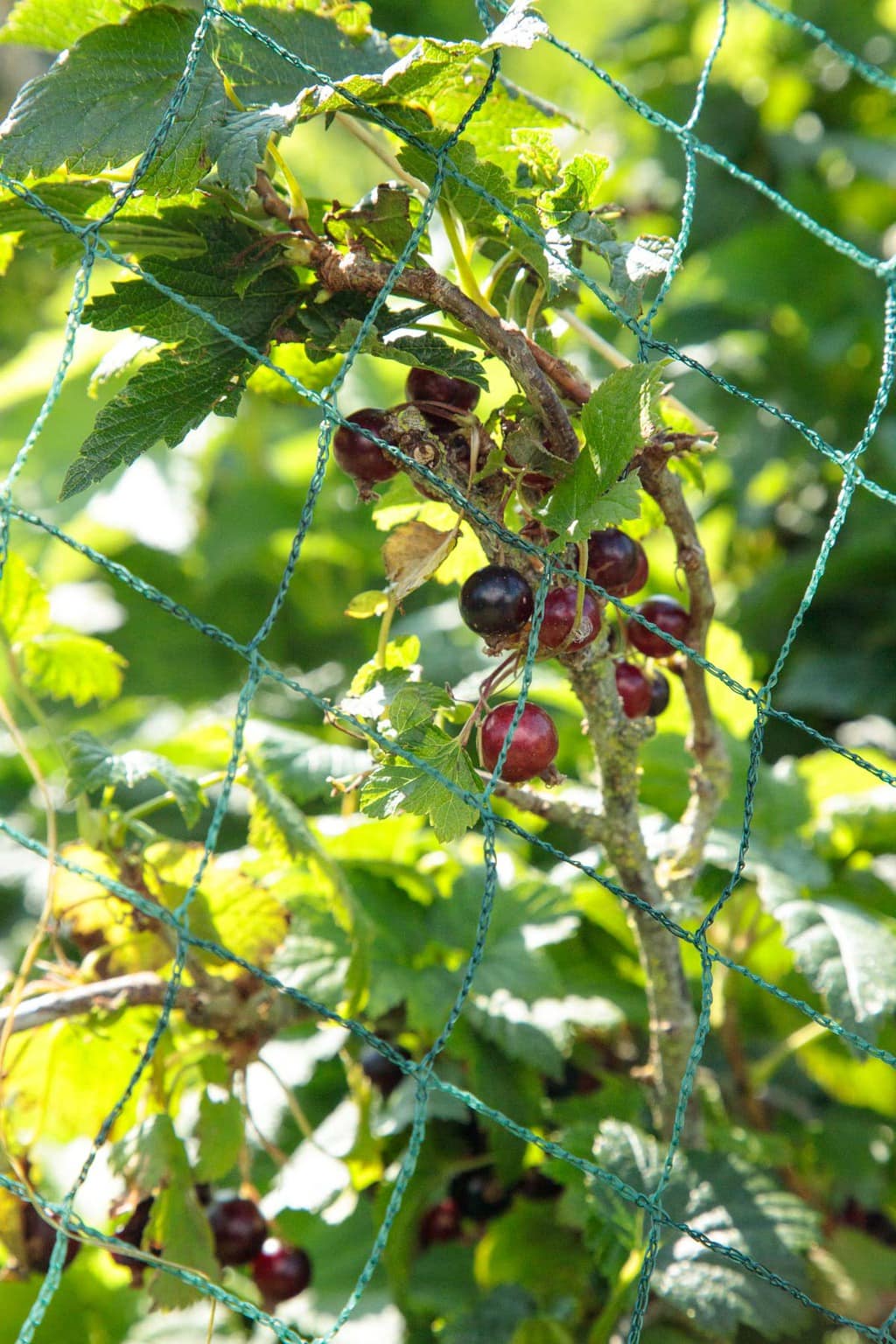 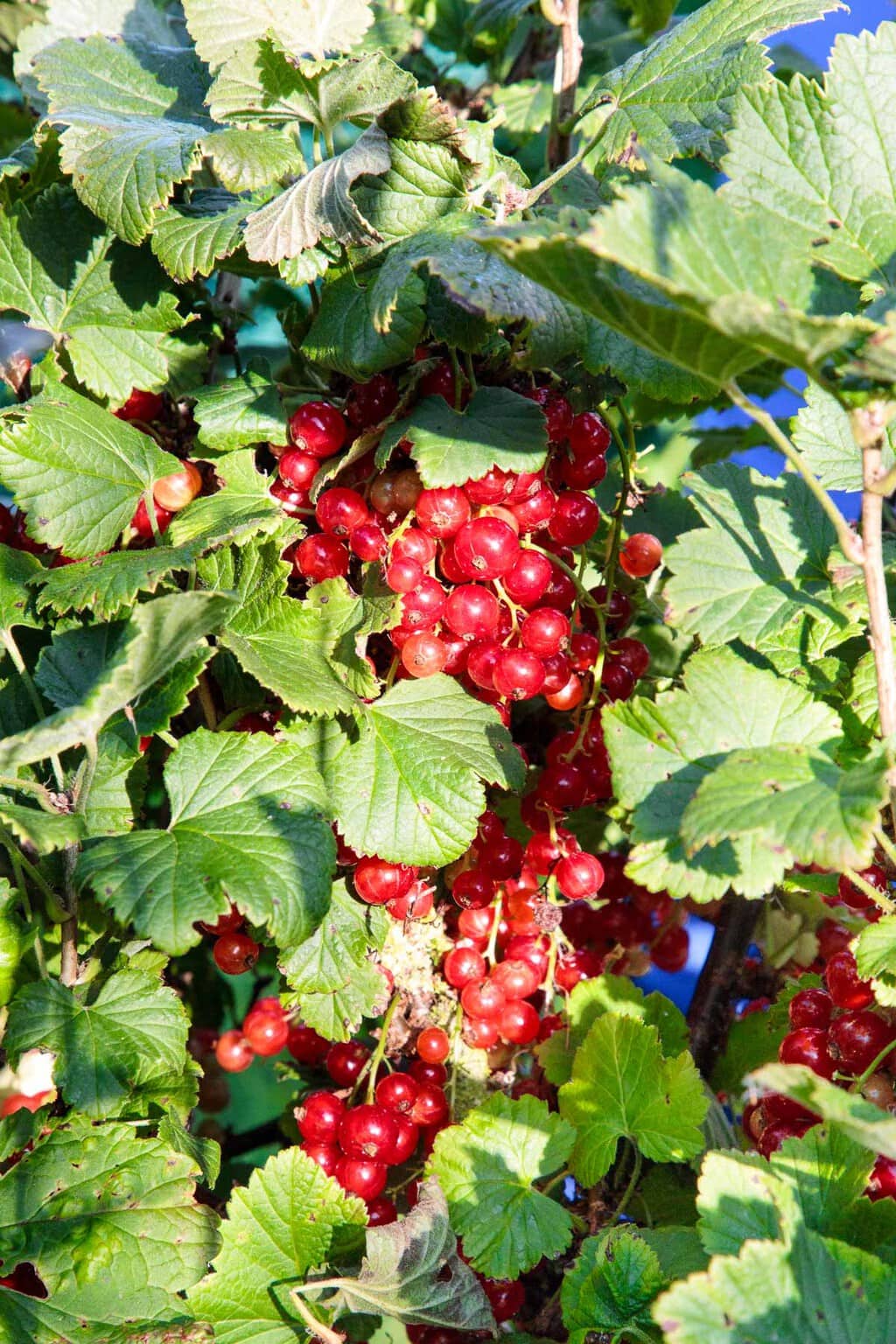 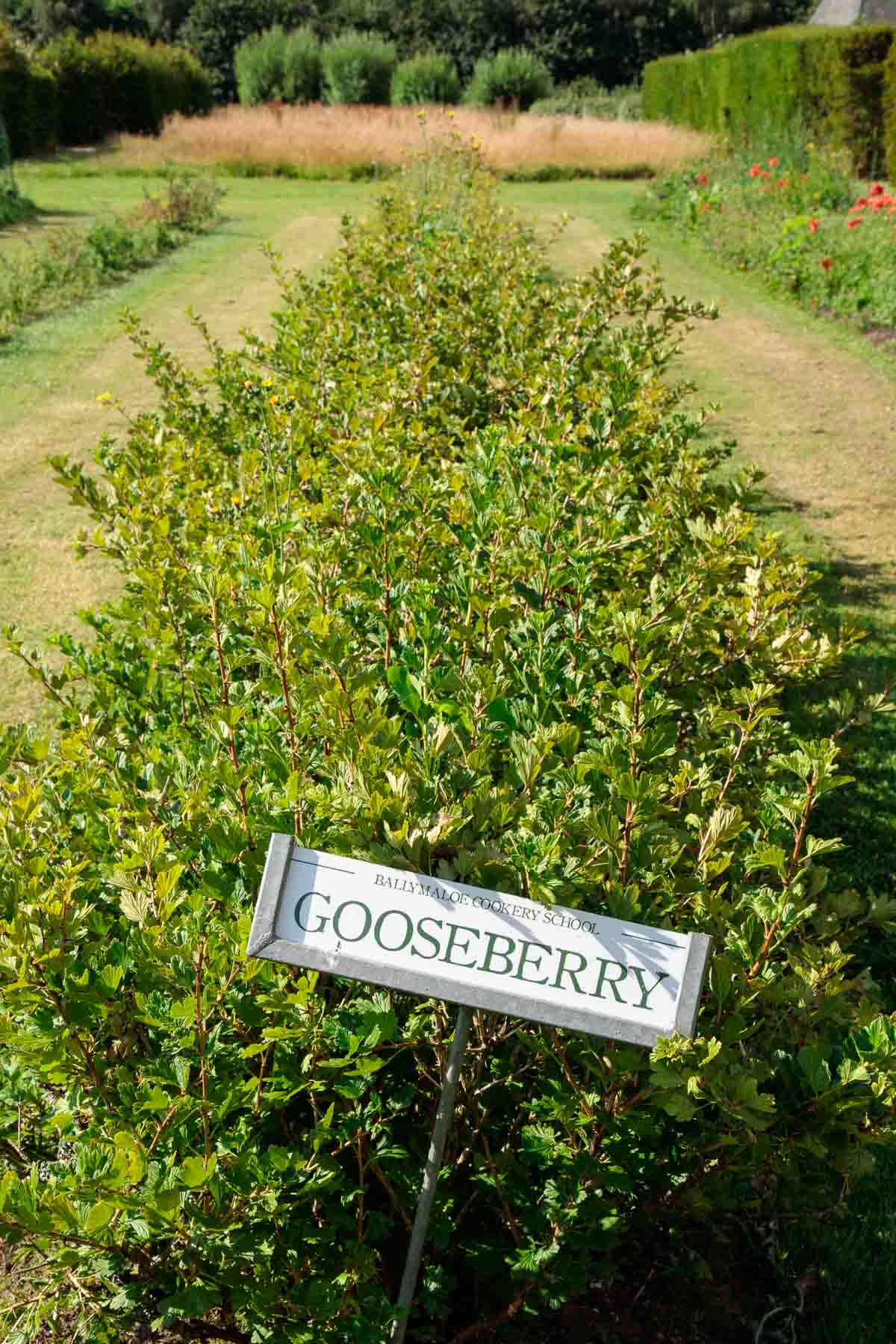 Rather than fruit orchards, per se, everywhere there is a little space, throughout the garden, over by the glasshouses and near the school itself, fruit trees abound. Every shape, size and type are happily growing alongside the flowers, herbs, vegetables, and soft fruit. 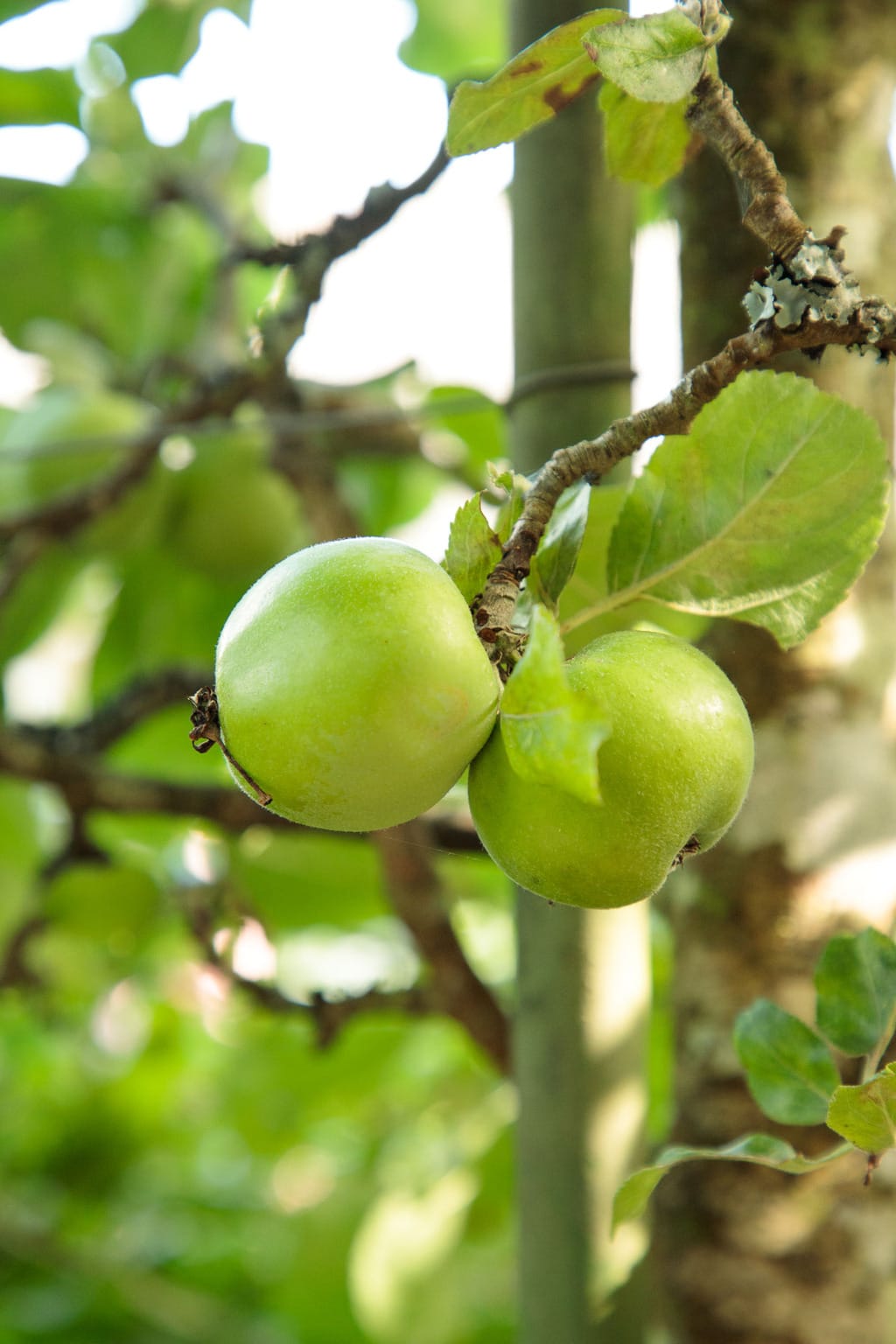 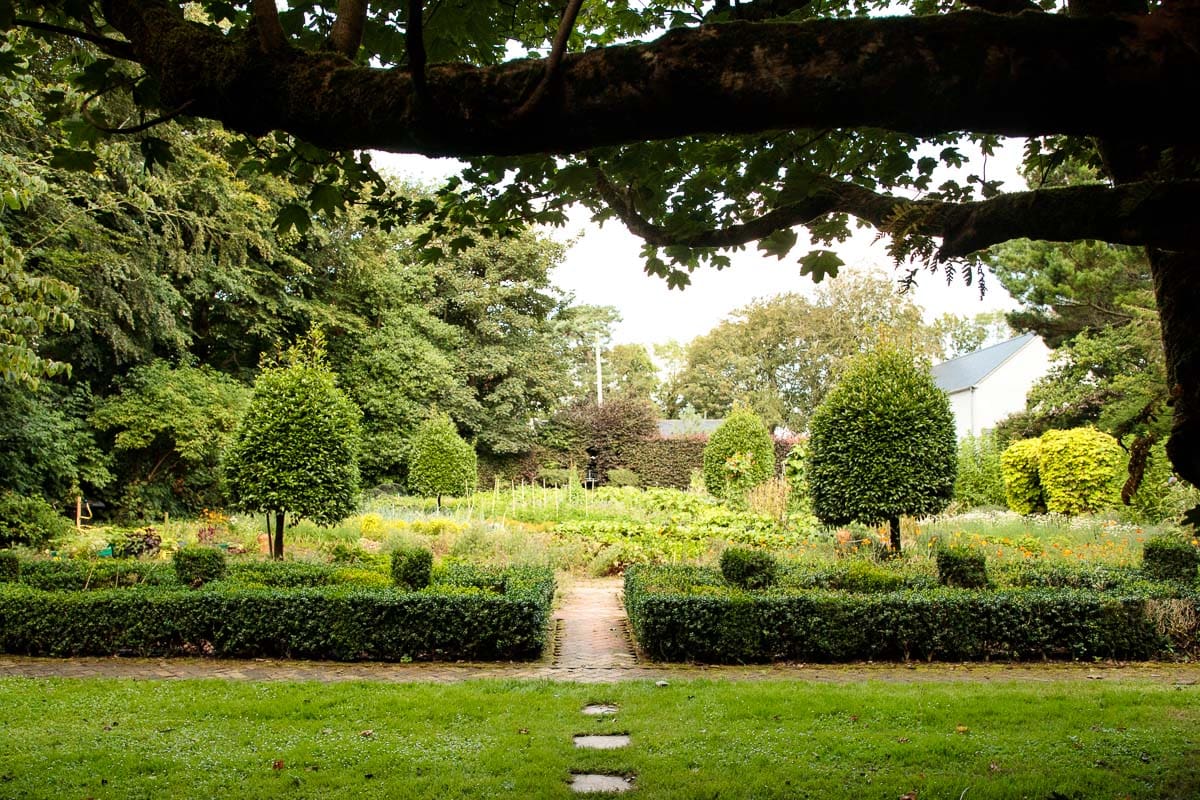 Ballymaloe - Behind the Scenes in the glass houses

Oh my! This place is veggie heaven! Rows upon rows, building after building of tomatoes, cucumbers, beans, peas, corn (yes, even corn!) and every other vegetable from exotic to plane Jane are grown in these massive glass greenhouses. With control over the moisture and temperature and protection from slugs, bugs and other garden thugs, the plants thrive and the farm, cookery school, chefs and students succeed. 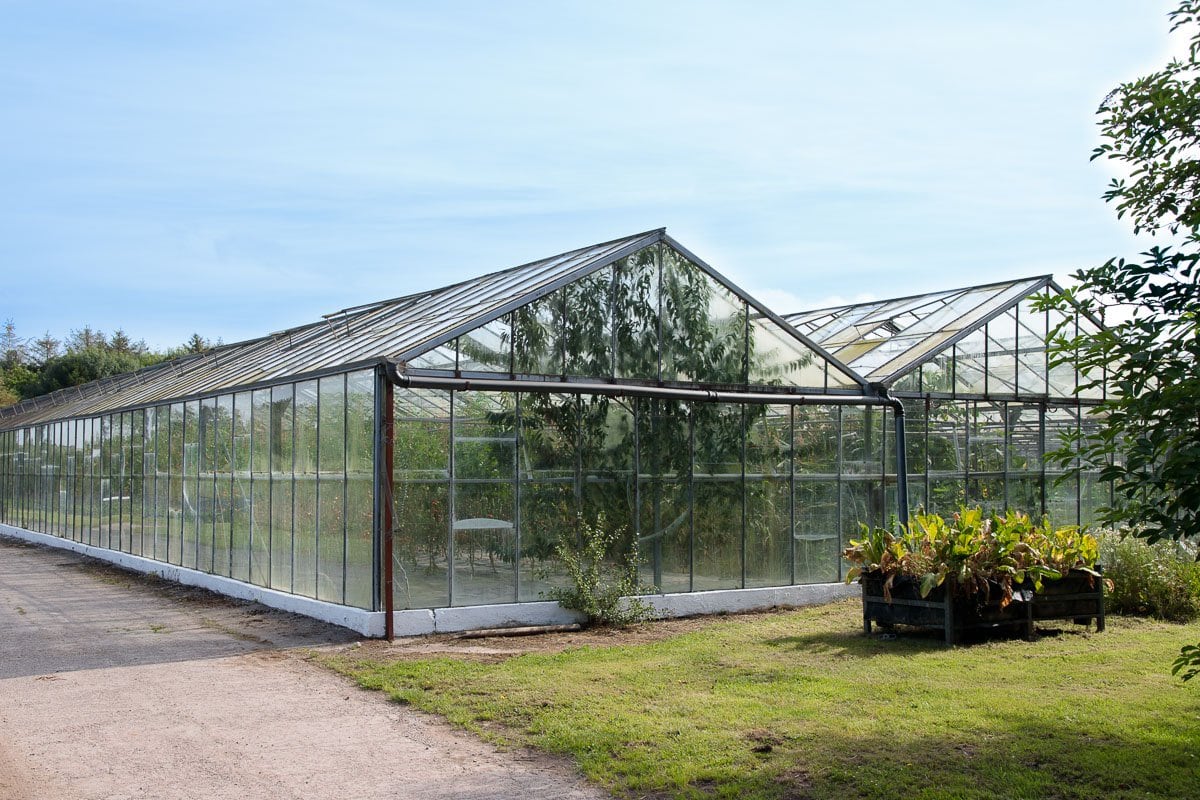 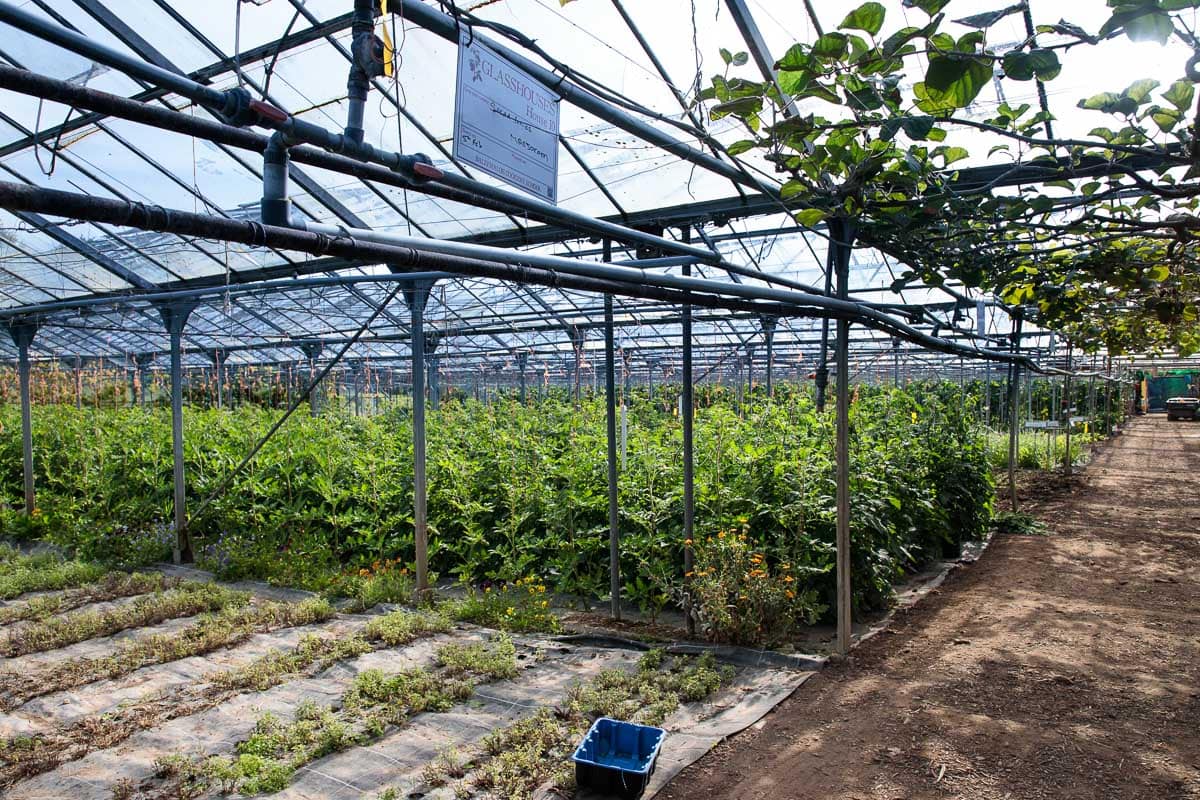 Hope you enjoyed our look at Ballymaloe - behind the scenes. We'll be sharing one more post on Ireland covering some of our favorite, off the beaten path places and experiences with the wonderful Irish people, coming up! 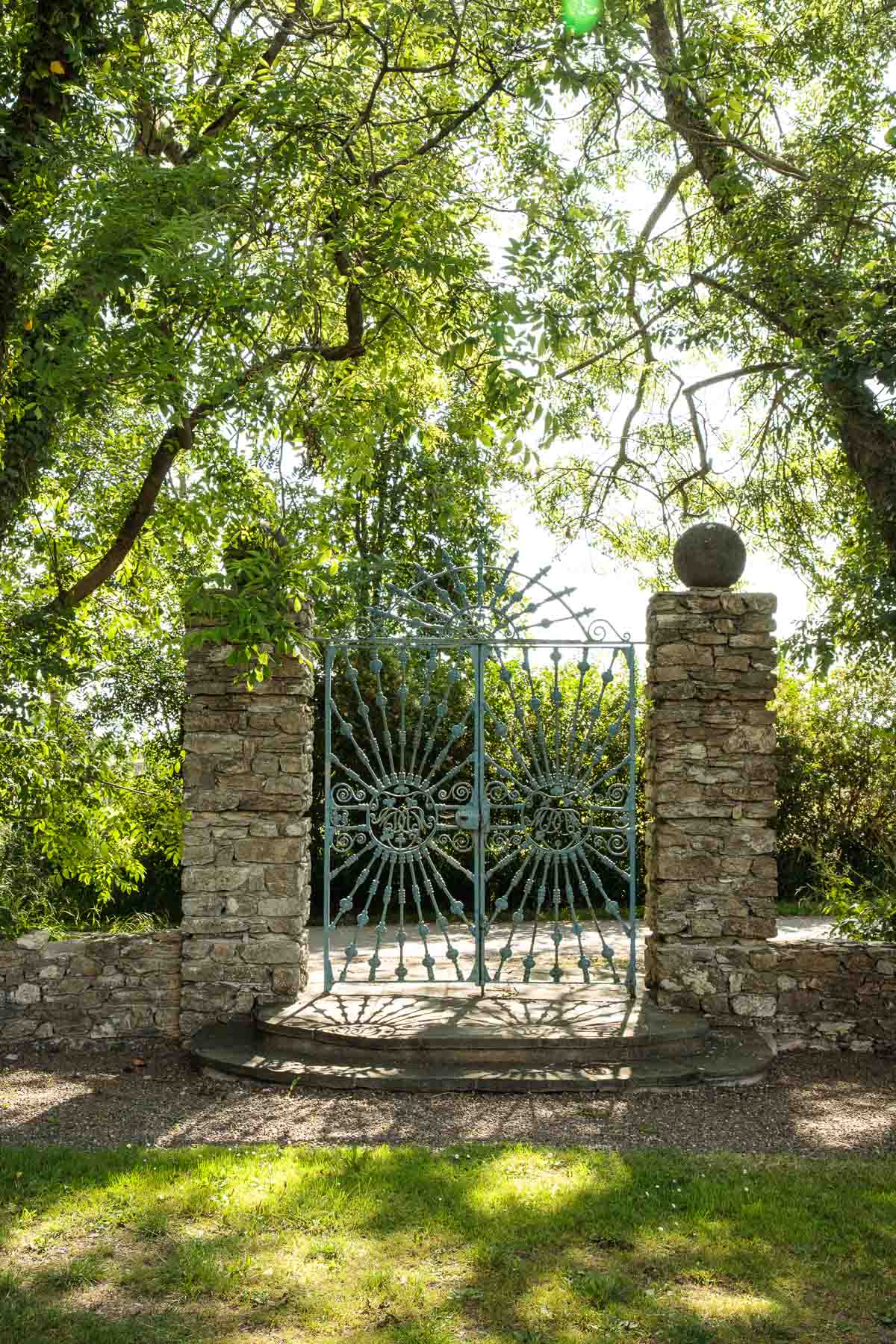 Two Unforgettable Weeks in the French Alps
« What to Cook Now, Healthy and Delicious
Our Favorite Apple Recipes »