"You're on the right track", Scott said, as he took a little nibble of the messy looking tart on the counter. "You just have to find the right train." It was the third time I had made this Plum Raspberry Crumb Tart. 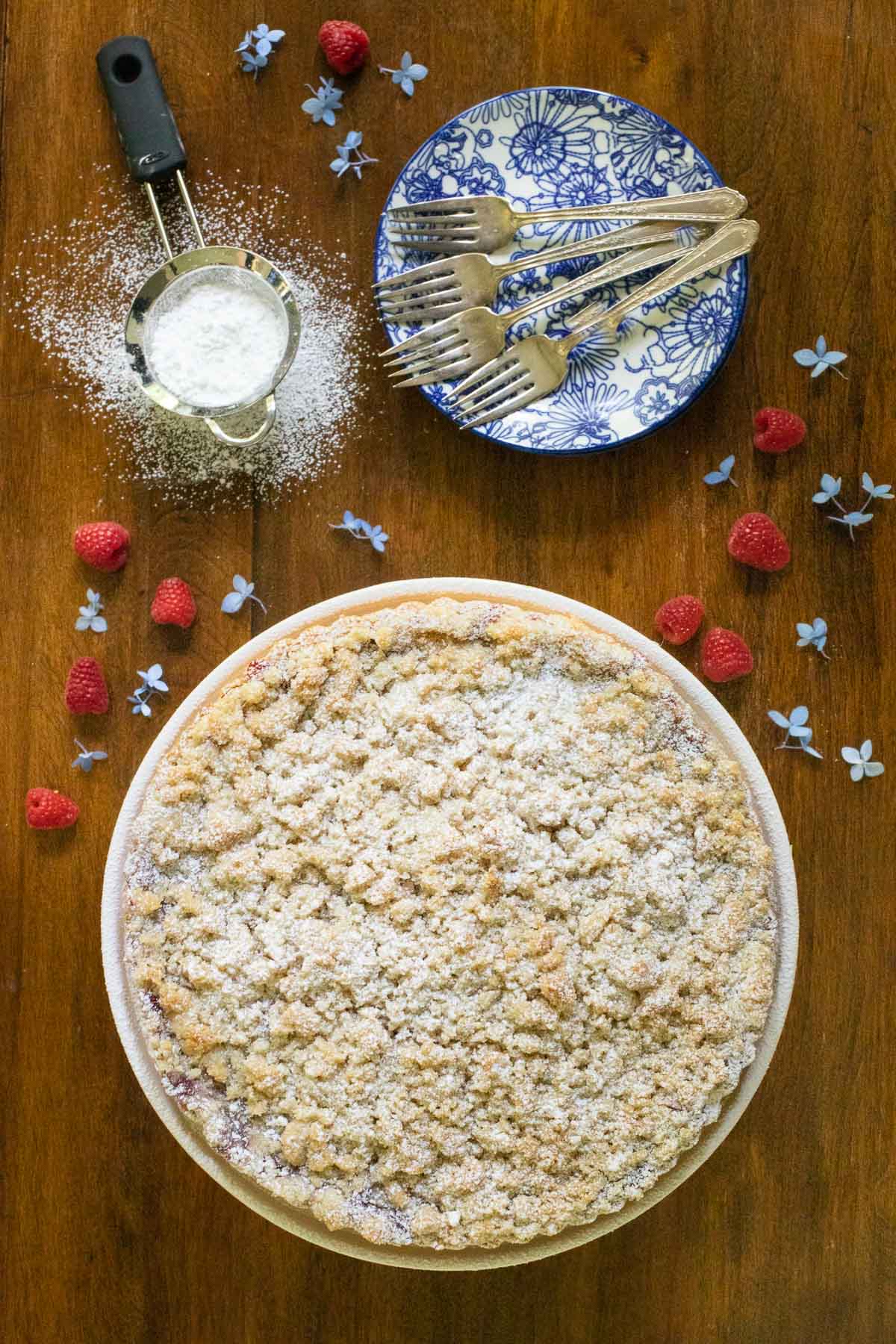 It made me laugh - which was better than crying... since I just couldn't seem to get this tart right. It's a super easy recipe, but each time I made it something went awry; too tart, too soggy, too messy. Way too messy on that third time around. When I opened the oven to check on it the third time, the tart looked like a volcano erupting in slow motion. I had added WAY too much of the raspberry/plum filling and when it began to bubble up, it bubbled right over the sides of the pan along with a good part of the crumb topping.

But I figured things out along the way so that you won't have these issues and, on the fifth try, I think I've definitely found the "right train". This Plum Raspberry Tart is ever so easy and incredibly delicious. It would make a wonderful sweet treat with afternoon tea, a fabulous finish to a nice dinner, or a "just because" indulgence to make an ordinary day special. 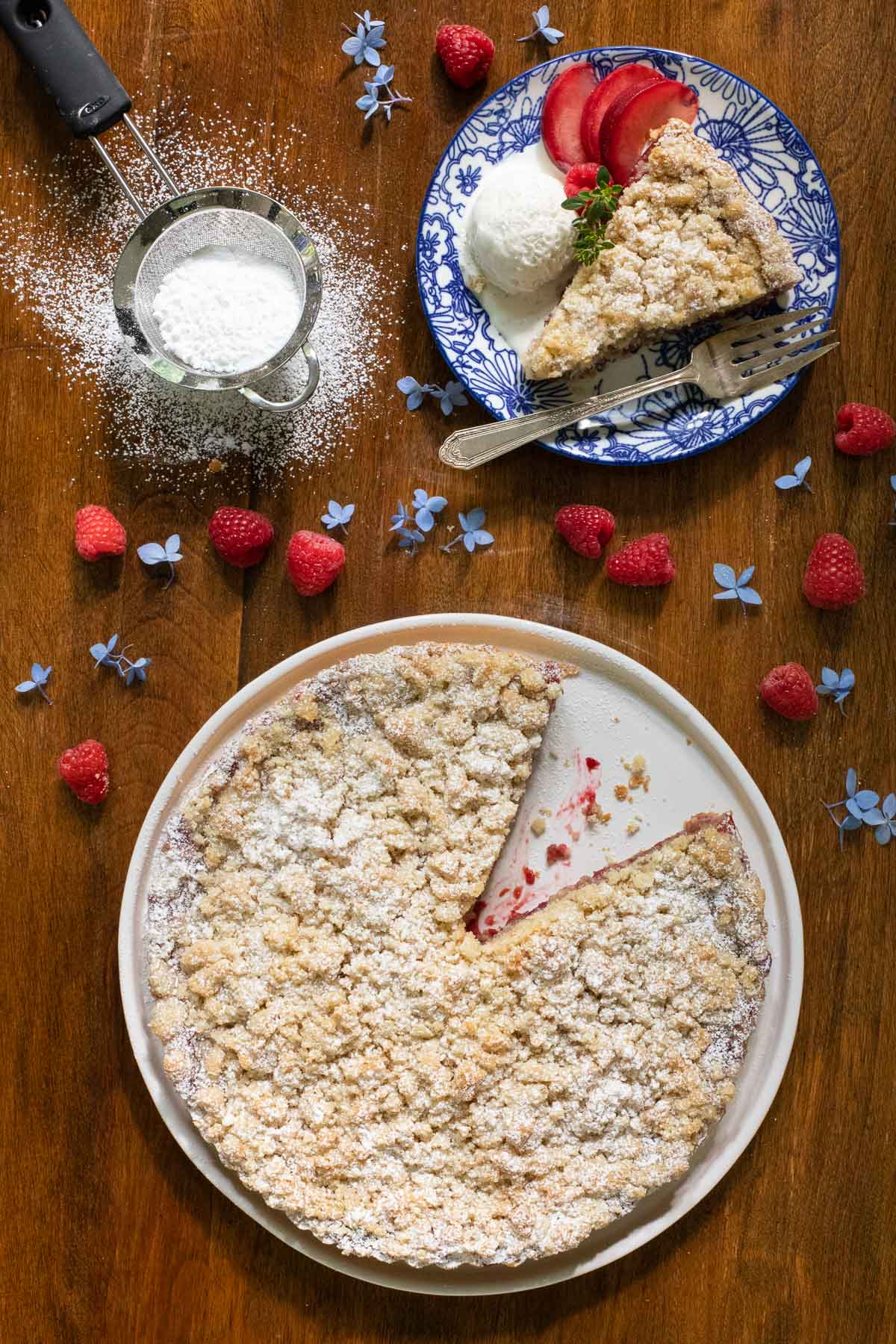 I promise you that no one will guess the simple, EASY convenience item that we utilize in this Plum Raspberry Crumb Tart. My friends (both great cooks) who sampled this tart, got wide eyes when I shared the "secret". They couldn't believe that this crust was a purchased refrigerated pie crust.

Using this one prepared ingredient makes putting together this Plum Raspberry Crumb Tart a breeze. With no crust to fuss over or roll out, you can have this dessert prepped and ready for the oven in right around 20 minutes. 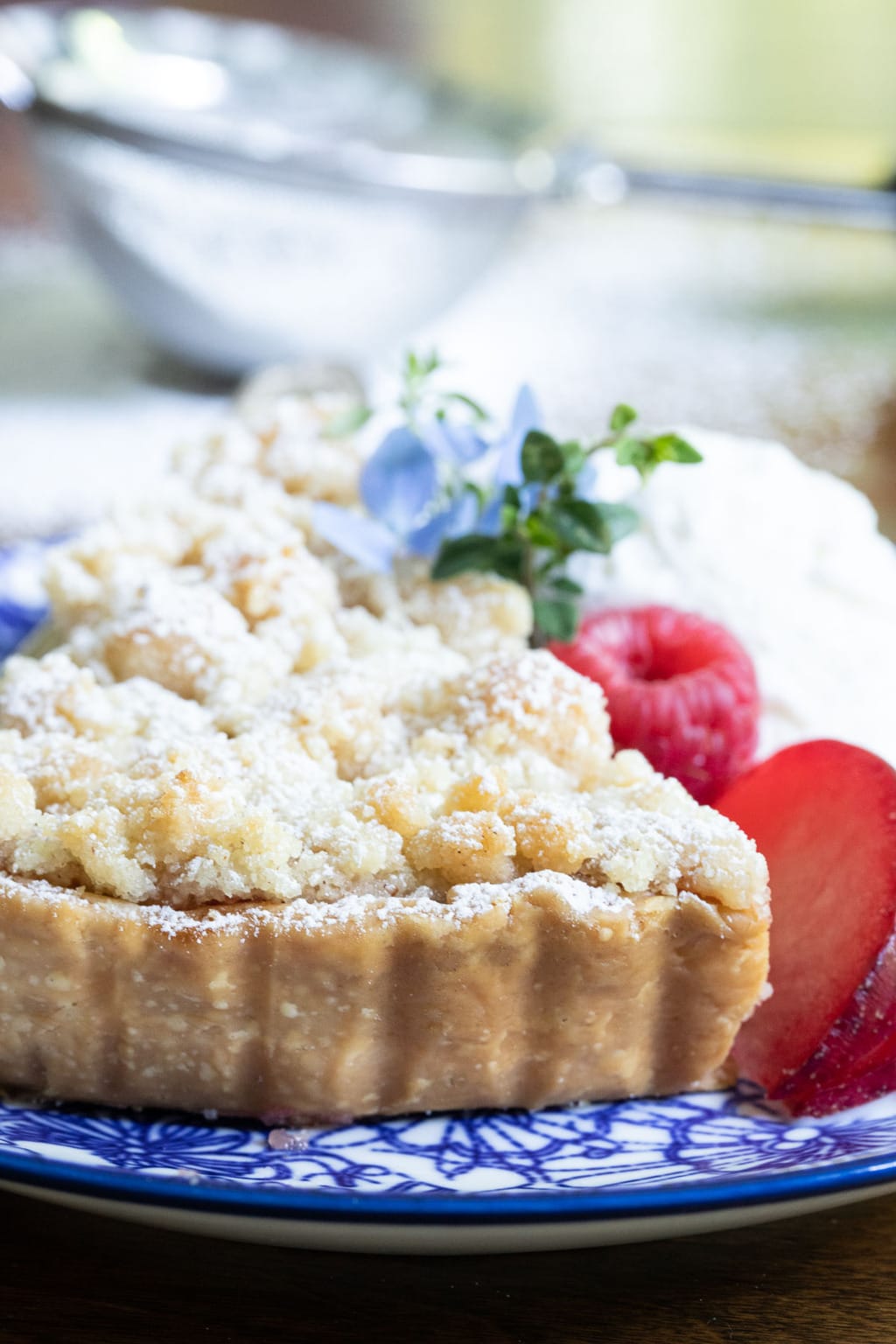 How to solve the soggy crust issue

Call me lazy but I LOVE that there's no blind baking involved with this recipe. When I'm flipping through recipes, the words "blind bake" makes me immediately turn the page or click to another idea. It's not that it's THAT difficult; line the crust with foil or parchment paper, fill the opening with rice, dried beans or pie weights, bake for a specified number of minutes, remove the rice, dried beans or pie weights, bake a little longer, remove from the oven, cool, THEN proceed with the rest of the recipe. To me, all that is just too time-consuming, a royal pain.

"But doesn't the bottom of the tart come out soggy, without blind baking?" No! It actually comes out golden and crisp.

How? That involves another little trick I love to use that makes all the difference in the world. Simply pop a sheet pan on the lowest rack as the oven preheats. I like to line it with foil so there's no potential for a mess, but that's up to you.

I've used this technique before with great results (like in this Easy Zucchini Summer Quiche) and have pretty much thrown blind baking out the window. Try it, I think you'll be surprised and convinced. I actually just cut a little sliver of this Plum Raspberry Crumb Tart that I made two days ago. I wanted to see how the bottom crust fared after two days under a cake dome (the things I do for you🥰). While the crust doesn't stay crisp for two days, it's definitely not soggy. (If you want, I'll try one more sliver, just for you, just to be sure 😂). 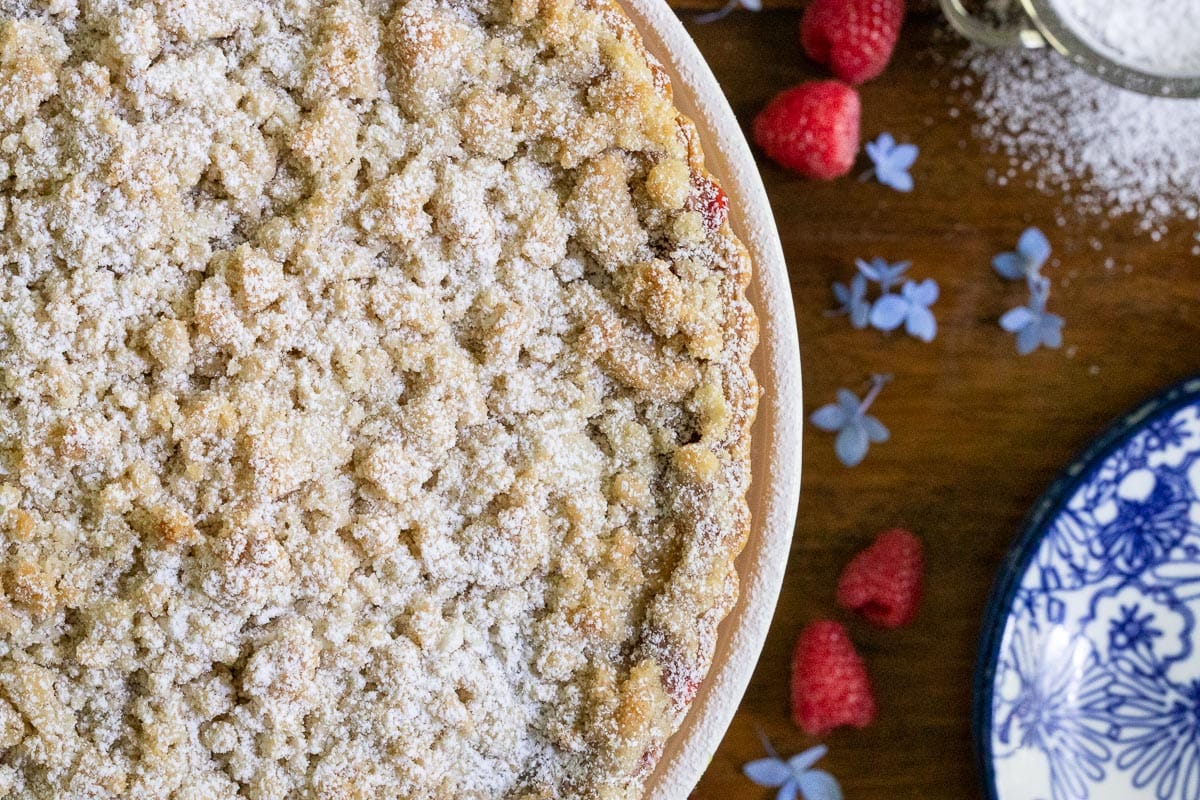 I shared my problem above with overfilling this tart while I was testing the recipe. But even after cutting back the amount of filling, I still had some issues with the fruit mixture bubbling and spilling over the edges, as well as pulling in some of the delicious crumb topping. I solved that problem by doing these two things: First - allowing the sliced plums to drain a bit on some paper towels and: Second -  baking the tart for 30 minutes before adding the crumb topping. Both problems solved!

Now that I've done the troubleshooting, it's your turn to make this wonderful Plum Raspberry Crumb Tart. Just pick up some plums next time you're at the grocery. They're in season (until October), abundant and reasonably priced right now. Serve it warm with a scoop of vanilla ice cream. I think everyone will love this dessert and it will be one of those sweet treats that's requested again and again! 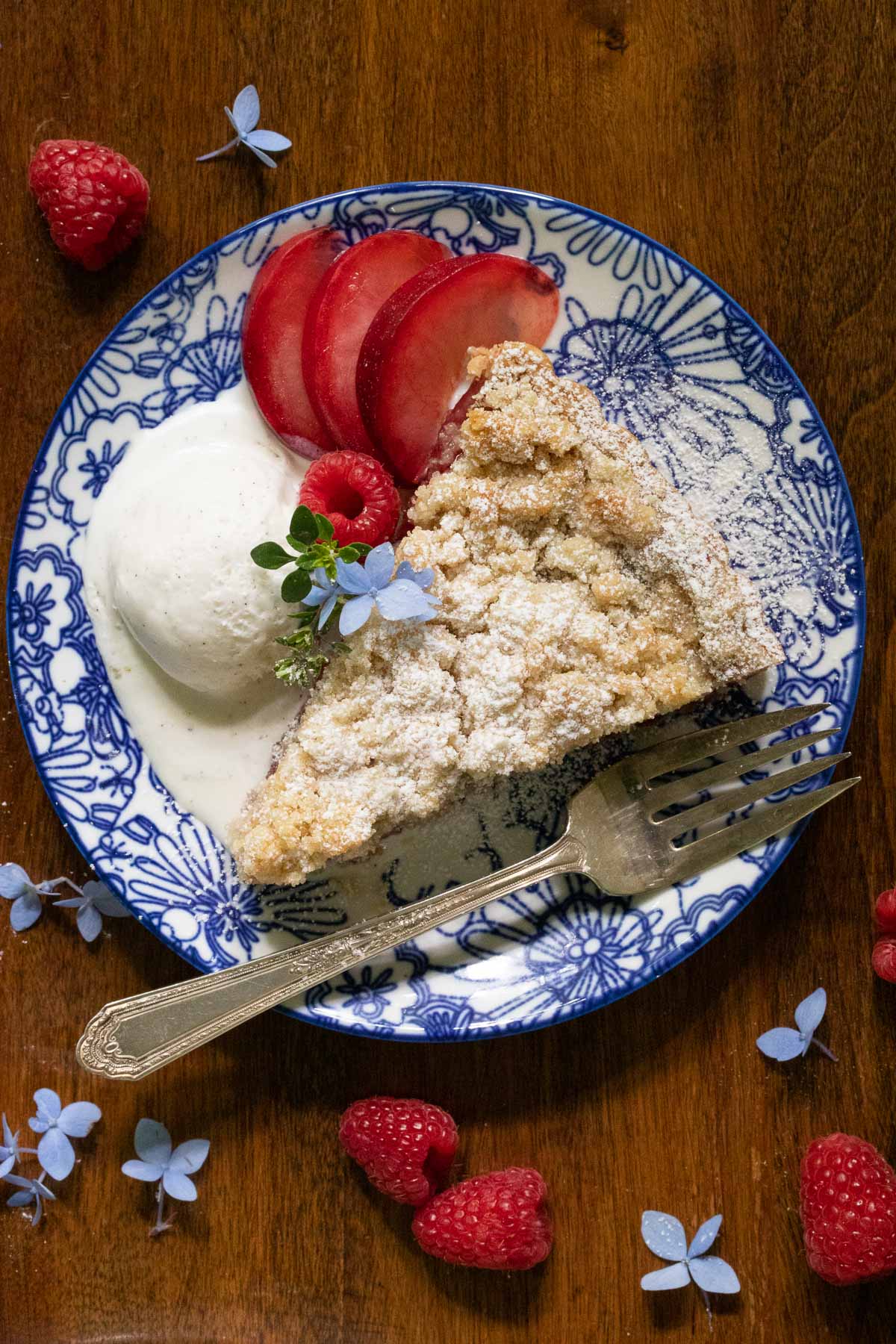 And he awoke and rebuked the wind and said to the sea,
“Peace! Be still!”
And the wind ceased, and there was a great calm.
He said to them, “Why are you so afraid? Have you still no faith?”
And they were filled with great fear and said to one another,
“Who then is this, that even the wind and the sea obey him?”

See Café Tips above in the post for further instructions and tips. 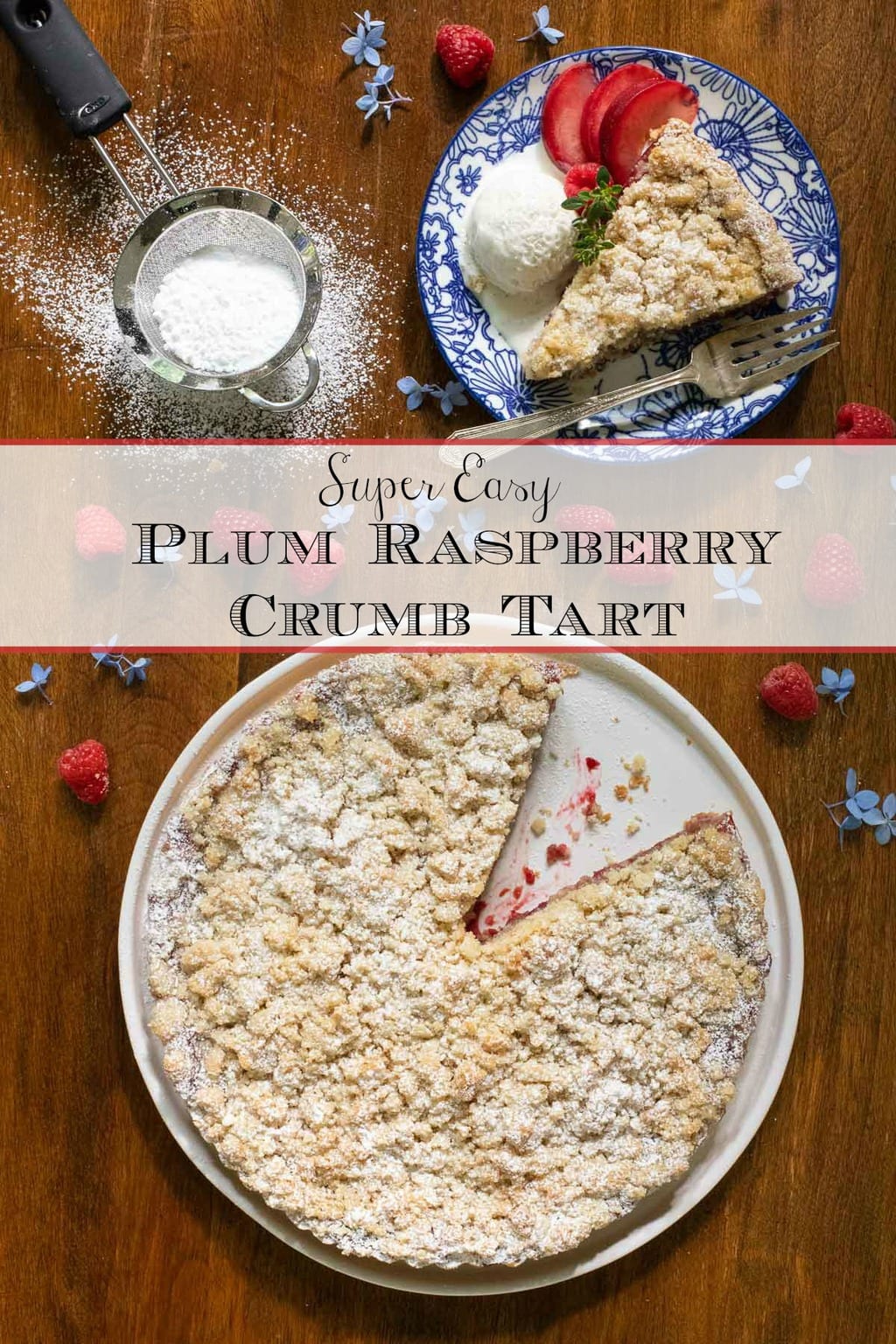