Highlights of three weeks in Ireland; not all the quintessential tourist destinations, but fun, fascinating, beautiful beyond description Ireland. Come join us, The Café in Ireland, Off the Beaten Path (Part 2 of 3)

We're back today with Part 2 of our Ireland, Off the Beaten Path series. Thanks so much for all your kind and thoughtful comments on Scott's first post in the series. He left off last time headed to the Dingle Peninsula which is located on the southwest coast of Ireland. That's where he'll pick up today. 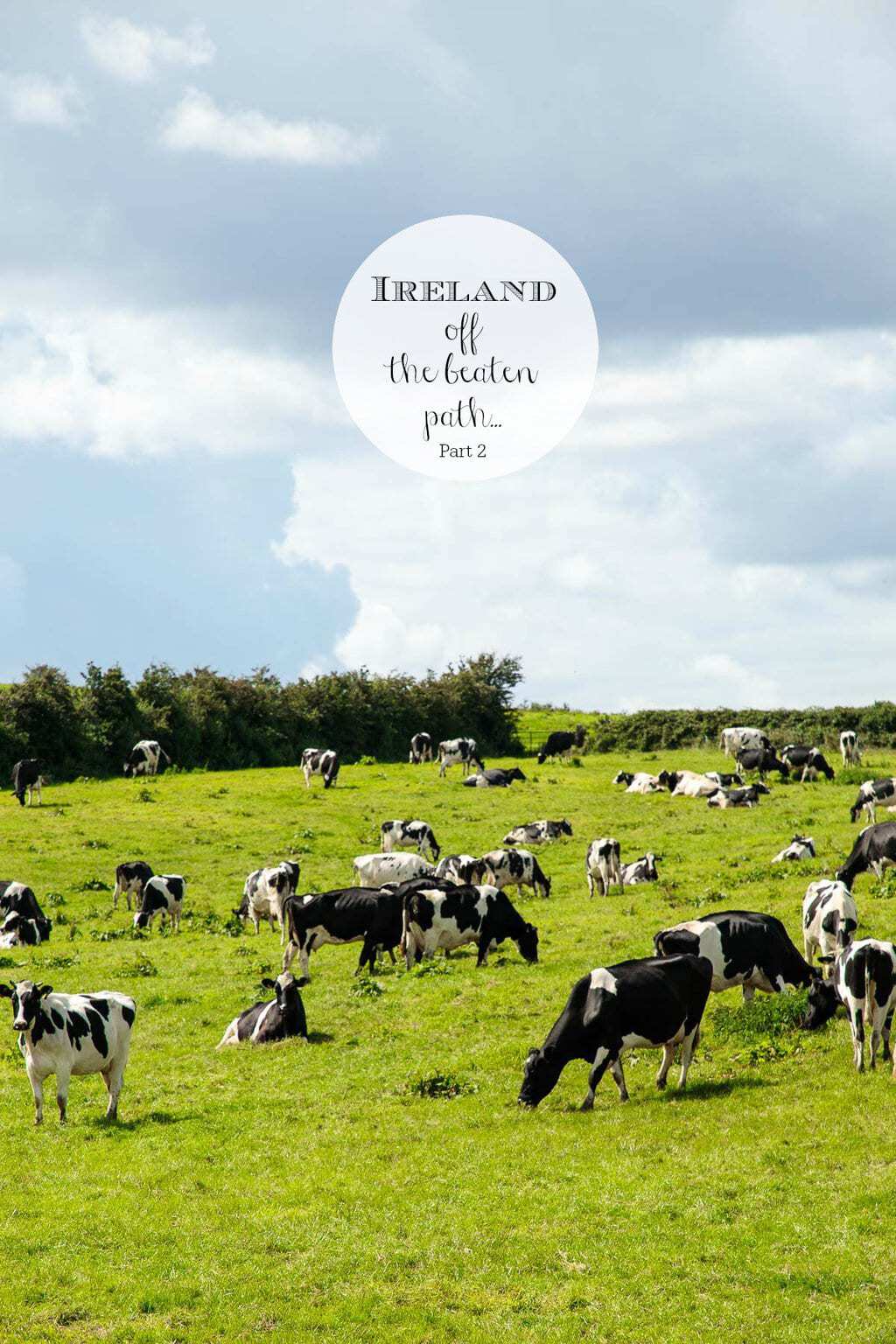 Our son Nick, and his lovely wife, Lindsay tipped us off to this breathtaking part of the southwest coast of Ireland. It was their favorite part of a month-long trip to Europe several years ago that also included England, France and Italy. On their recommendation (and many others who had traveled to Ireland), we decided to concentrate on the Dingle area for three nights. 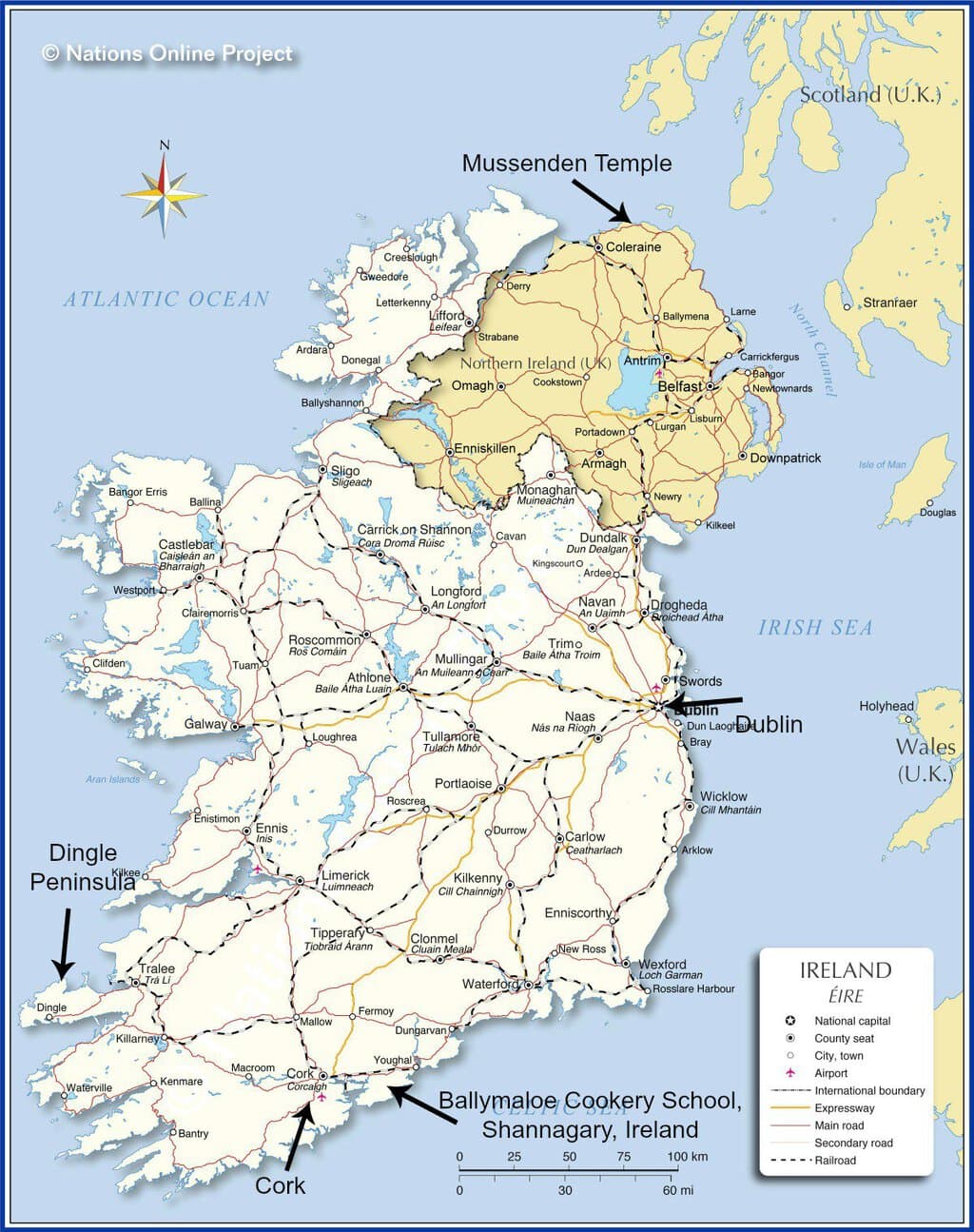 The little town of Dingle is adorable although we happened to be there over an Irish holiday weekend and it was over-run with vacationers. We're not particularly crazy about places that are swarming with tourists so we chose to spend most of our time in the countryside of the Dingle peninsula, touring the island and hiking the beautiful cliff paths. 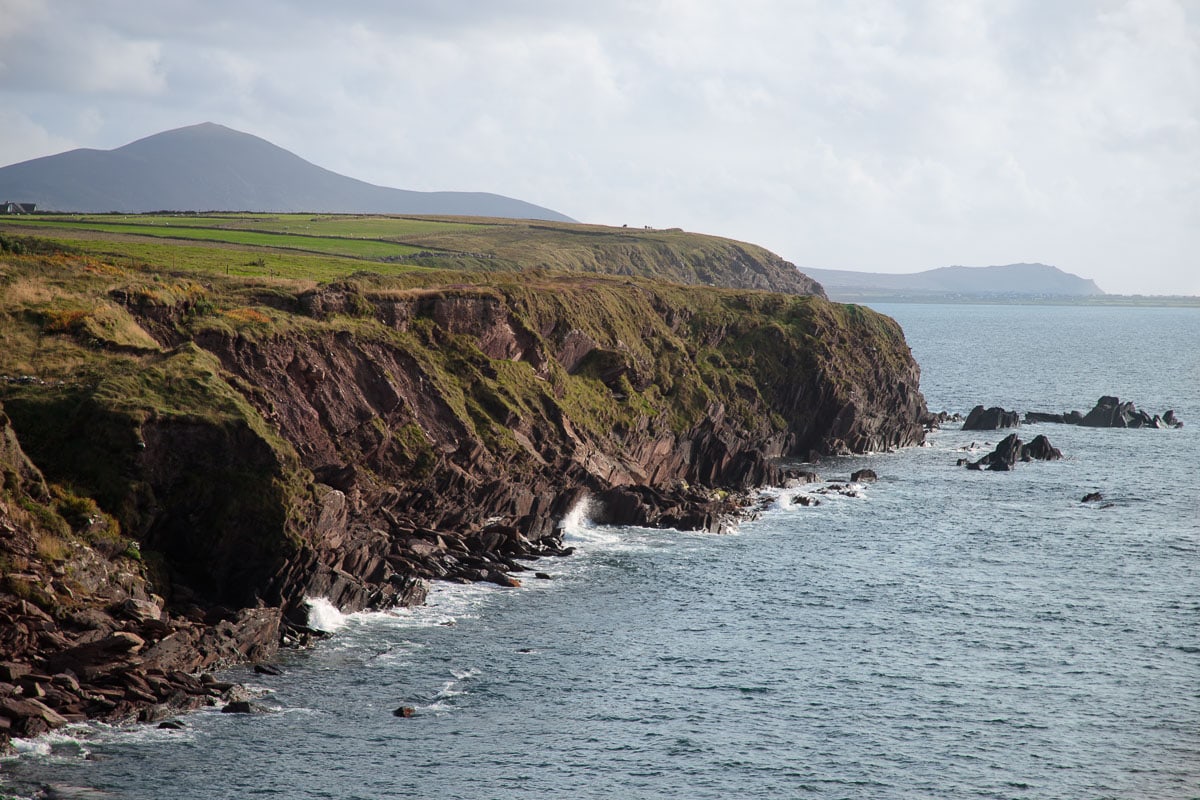 The peninsula didn't disappoint although the weather had turned a little more gray and we found ourselves dashing in and out of intermittent showers. But who's to complain when you observe the spectacular green that the Irish rains produce. 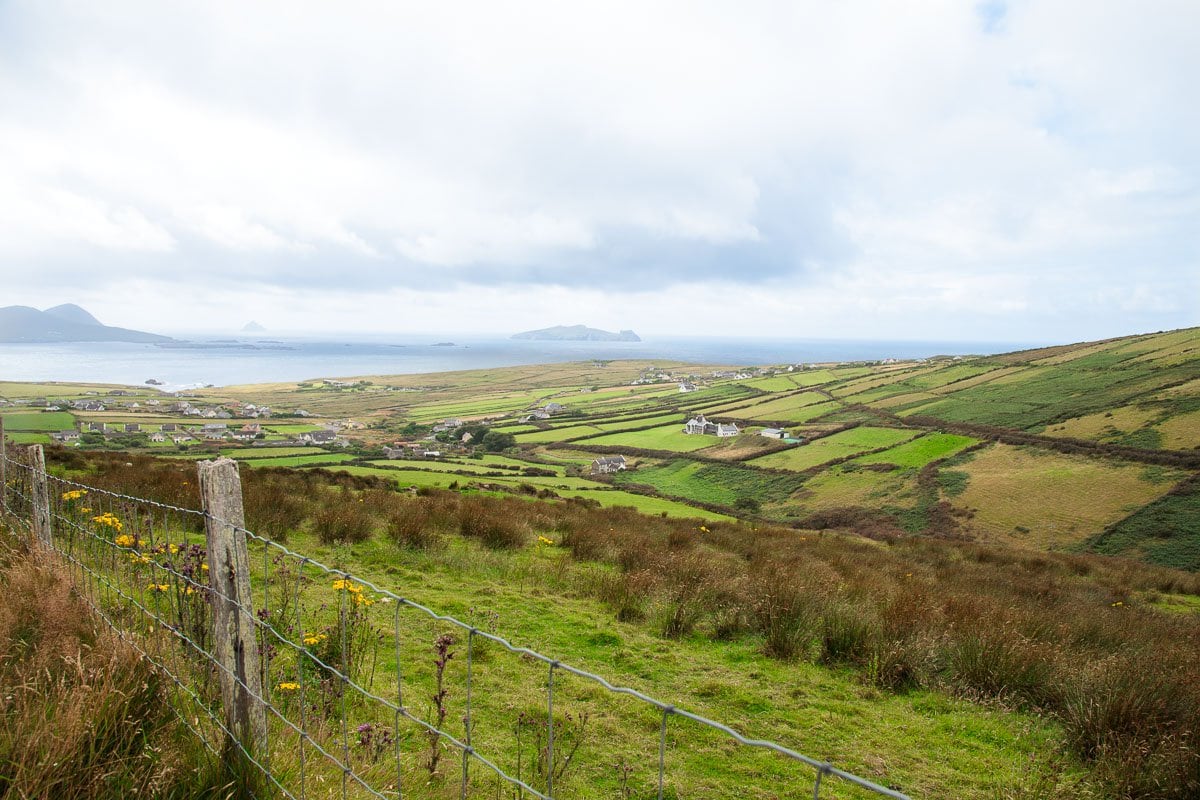 When you're driving the narrow roads on the Dingle peninsula, it seems that around every bend there's another stunning view. 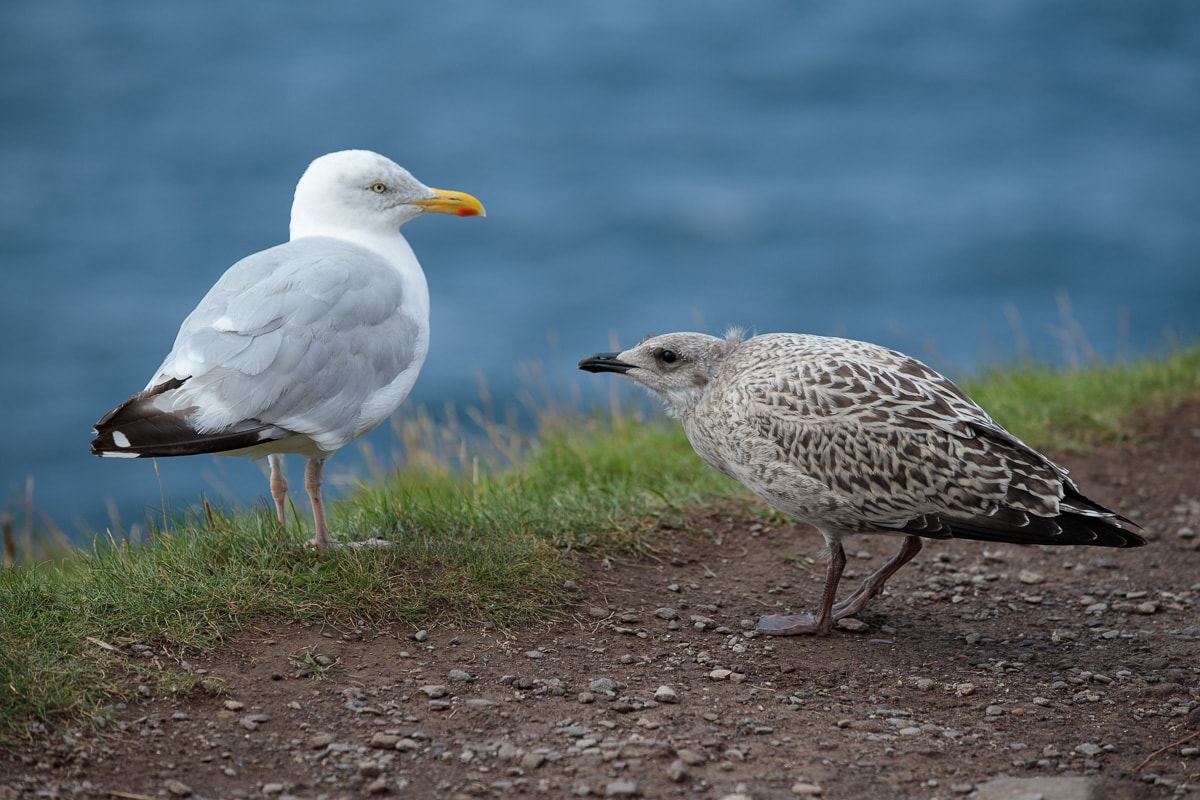 Lots of fine-feathered friends joined us on the beautiful Dingle cliffs. These two were having a conversation about the over abundance of tourists invading their territory on these Irish bank holidays! 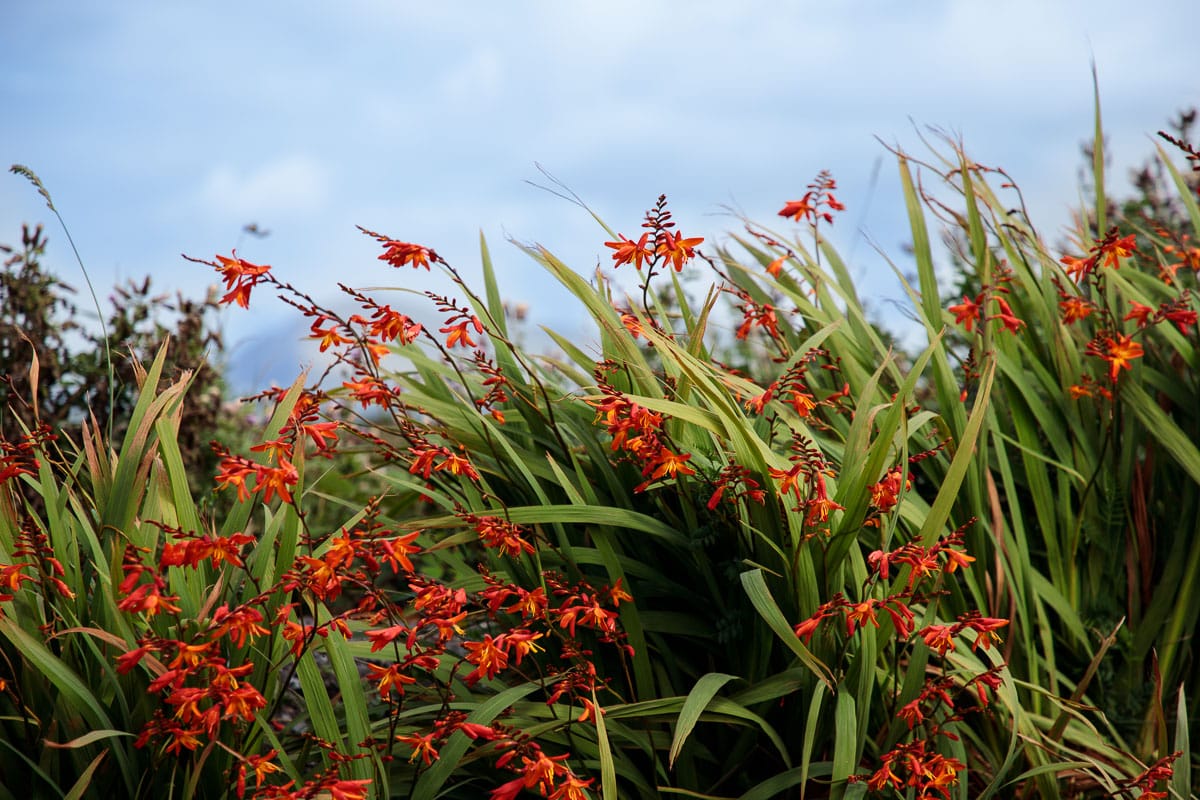 Wild flowers grow unabashedly and in every shade imaginable in the fields, meadows and hillsides of the Dingle peninsula. 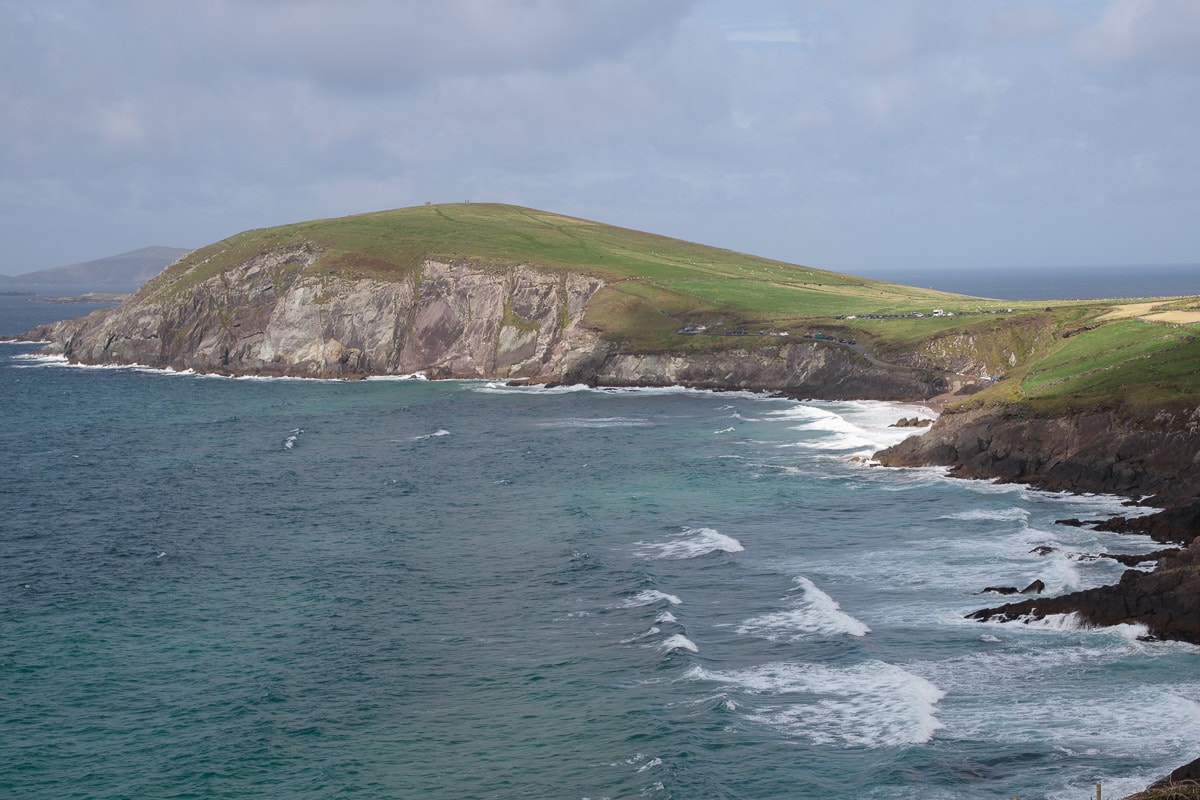 The Dingle countryside is absolutely stunning with steep cliffs that drop dramatically to the rocks and crashing Atlantic waves below. 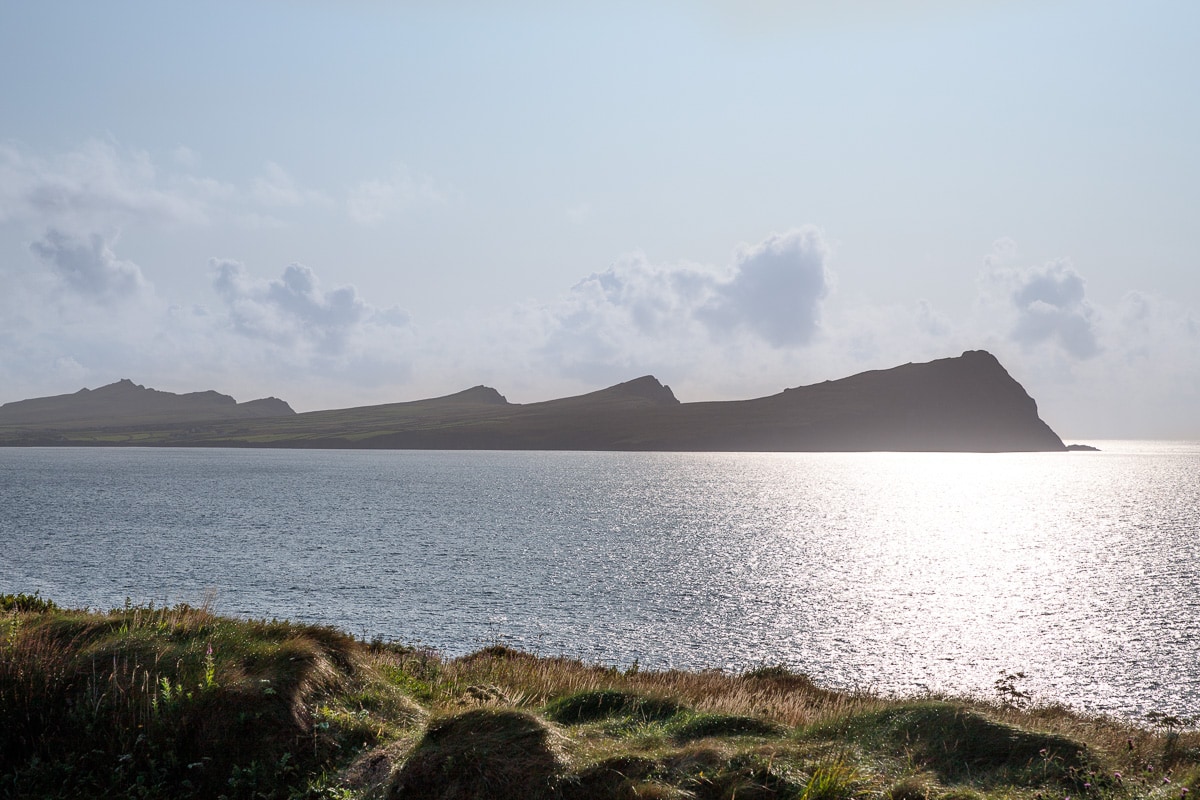 The shimmering water surrounding Dingle is a sight to behold from the well-worn paths that meander along the cliffs. Although the little village of Dingle was crazily crowded while we were there, just a short drive in any direction was rewarded by exquisite peace, quiet and beauty. 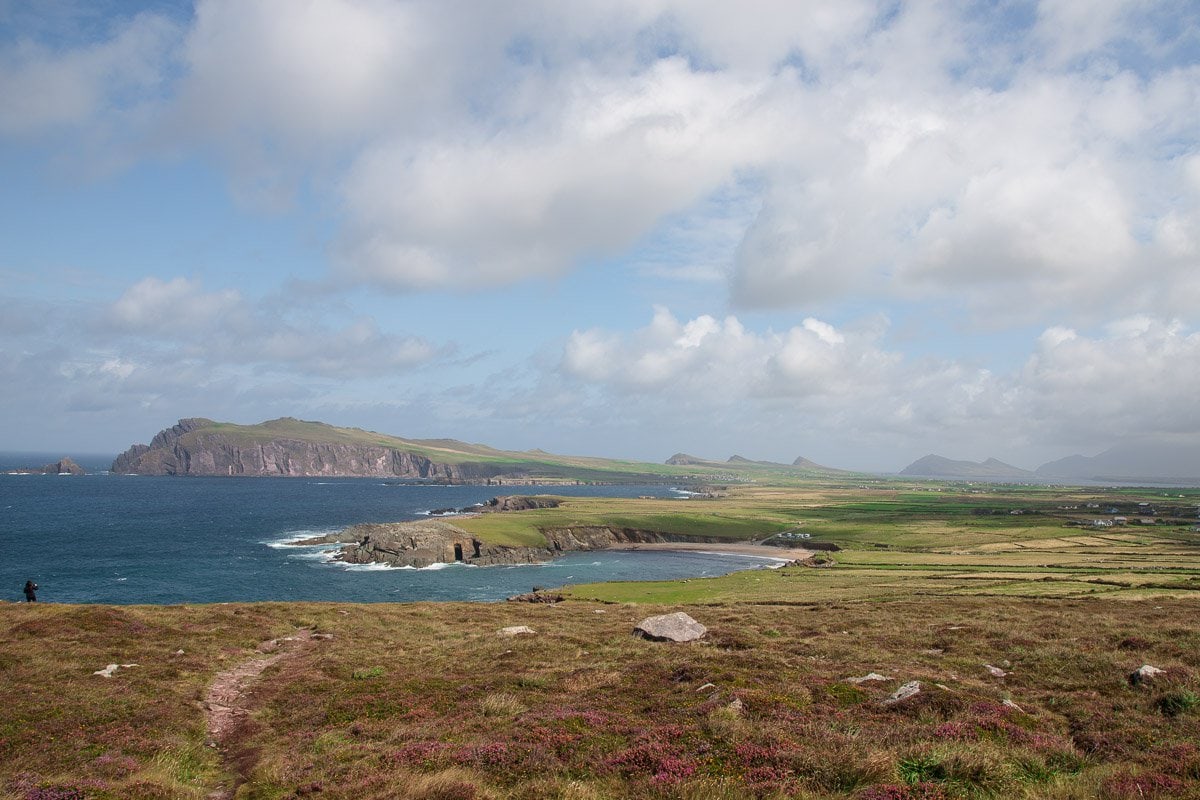 If the day starts out gray and cloudy, there are often breaks with blue sky peaking through. Everything looks even greener when the sun shines. 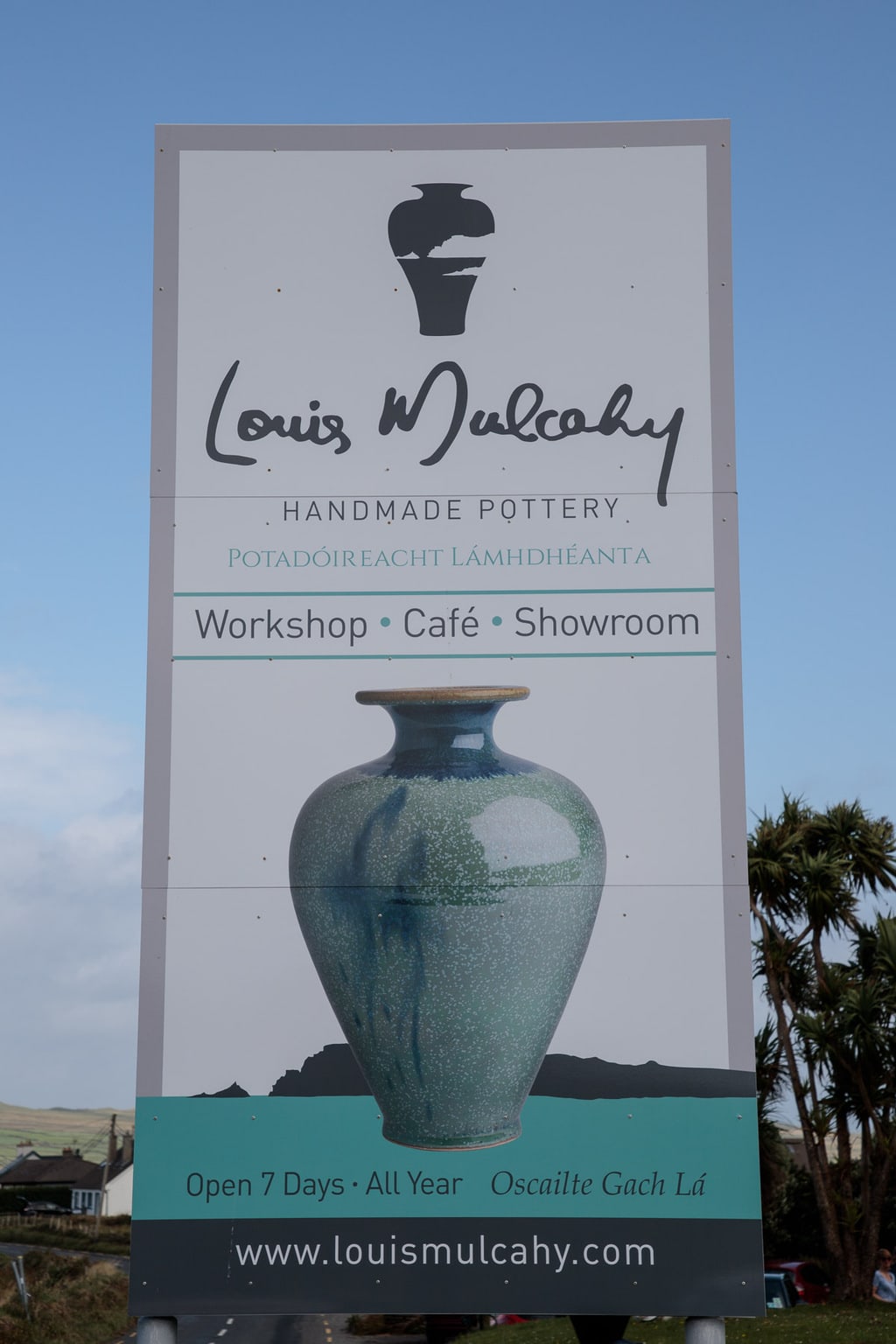 If you ever get the chance to visit the Dingle Peninsula, be sure to stop at Louis Mulcahy Pottery. It seemed to pop up in the middle of nowhere as we toured the quiet, beautiful Dingle peninsula. It's a working pottery where you can watch the art being created and even take a hand at the potter's wheel yourself.

This charming little establishment also houses several lovely floors of pottery showrooms and a sunny café that serves fresh and delicious brunch and lunch offerings. Without a doubt, it's some of the prettiest pottery Chris and I have ever seen! They offer very reasonable shipping to the US and we couldn't resist picking up a few pieces. The shipping is not only reasonable, but it's also super fast. The day after we returned home, our pottery was delivered! 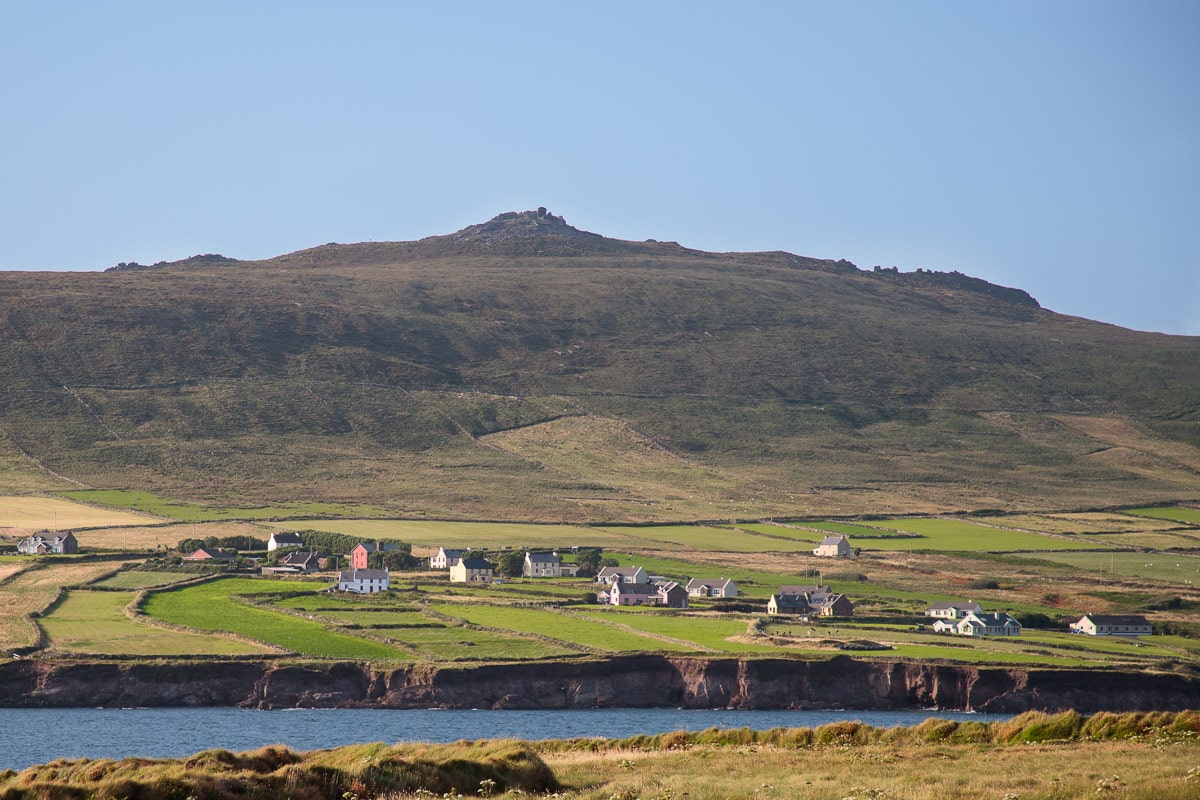 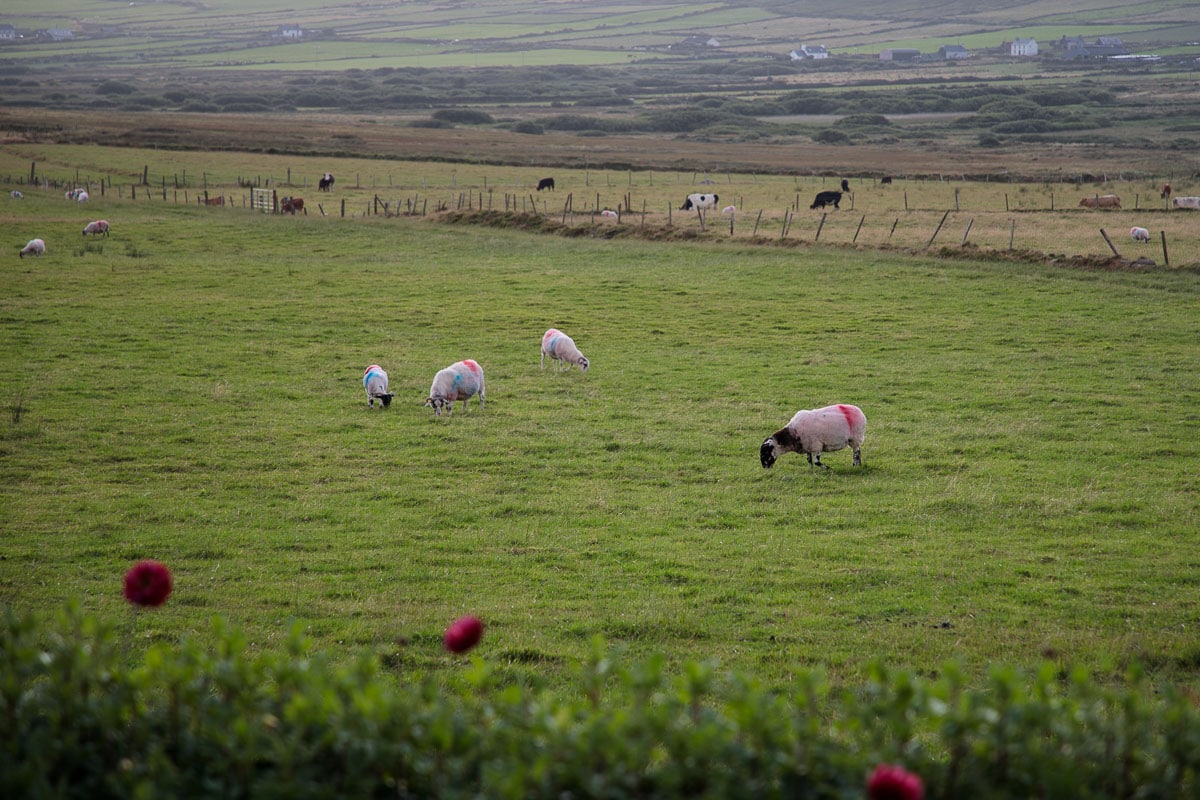 See the stripes of color on the sheep? What in the world?? Many farmers in Ireland paint their sheep for identification. With thousands of sheep roaming on thousands of hillsides, it would be difficult to know who belongs to who. Hence the stripes. A customized painted sheep is easy to identify when it comes time to claim ownership. 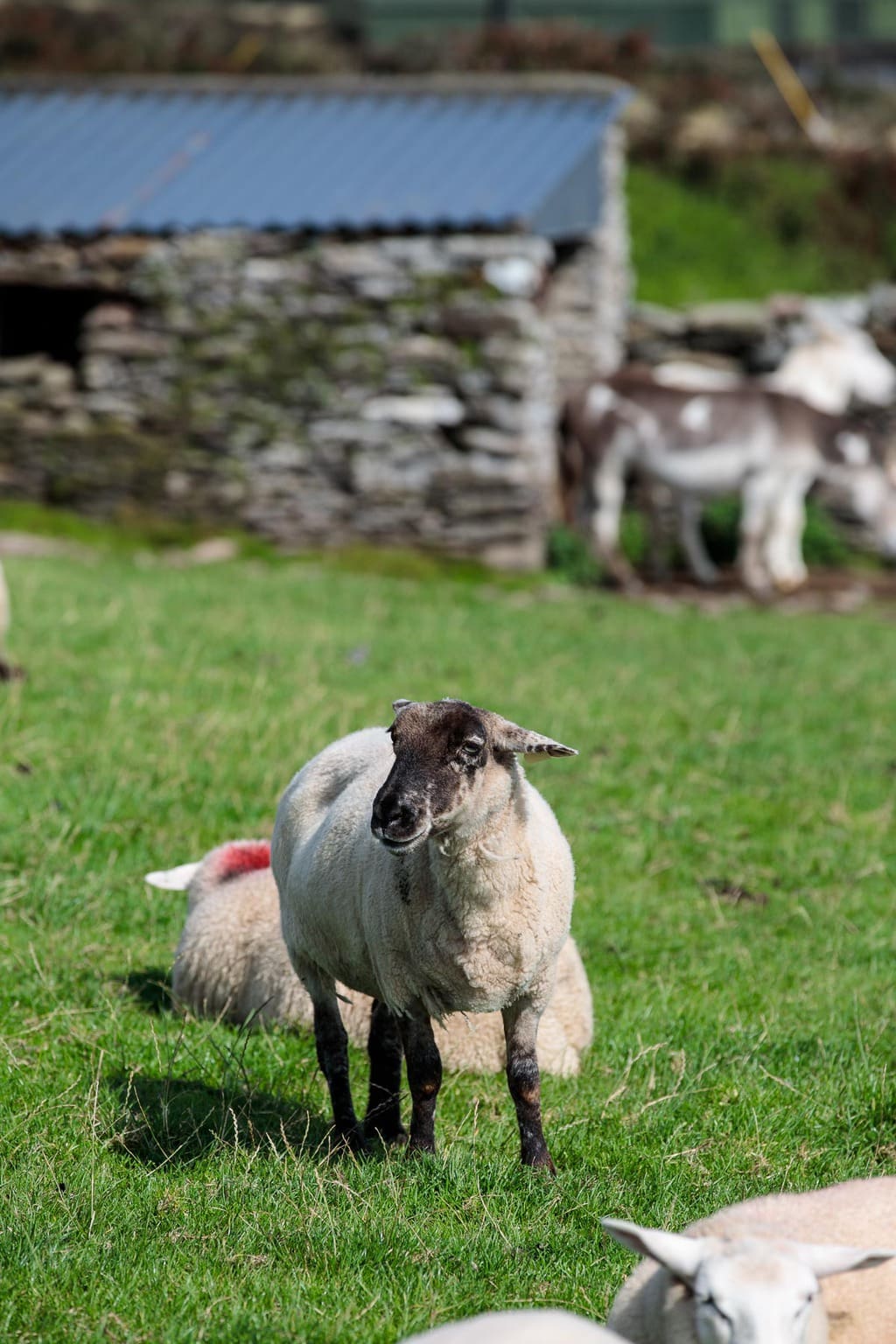 This handsome fellow was happy to pose for the camera! 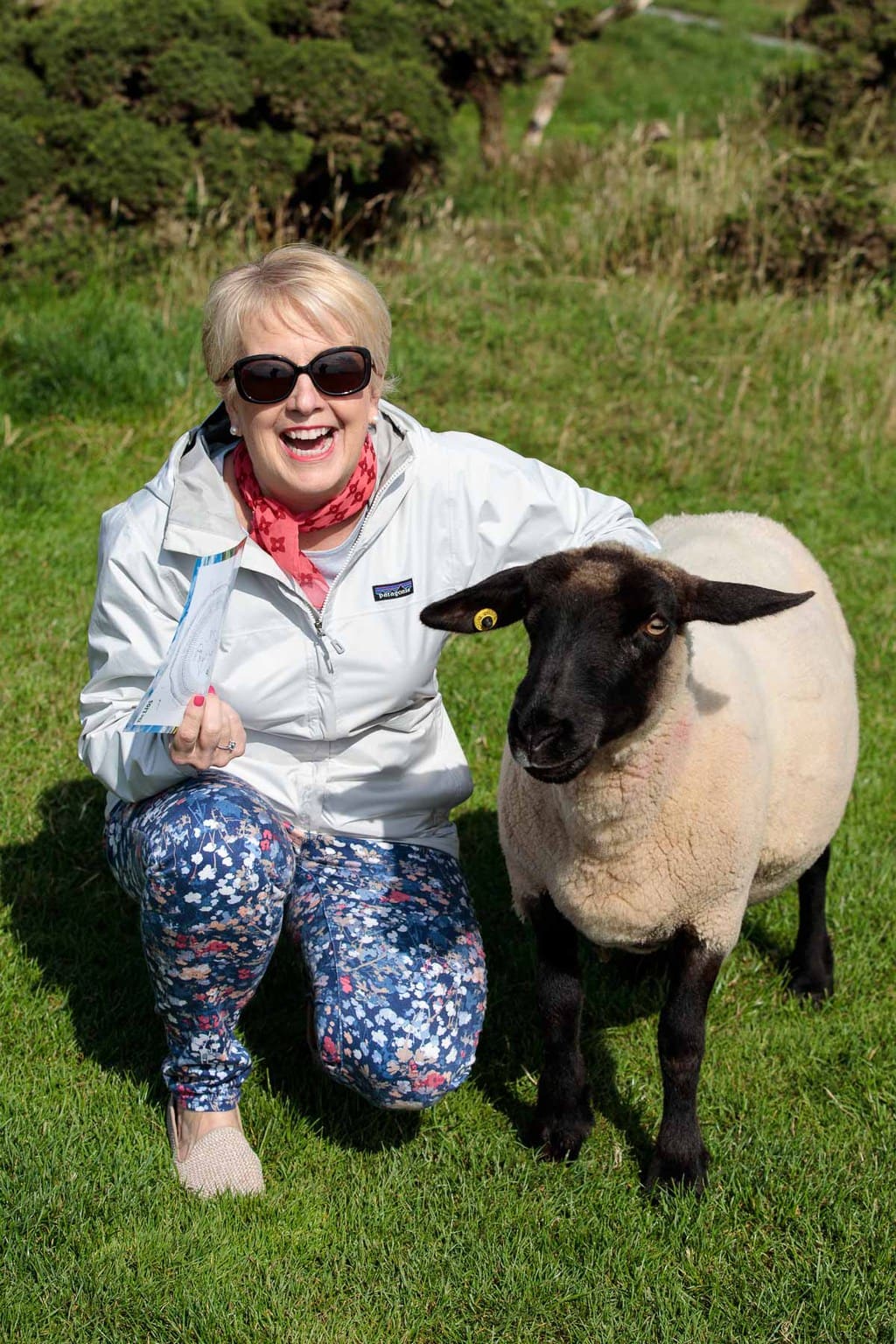 Chris made a friend while we were roaming the Dingle Peninsula. She was hoping this one could be shipped home as easily as the pottery; but no such luck!

After several days of exploring the Dingle Peninsula, we sadly said farewell. It was time to complete the third portion of our trip. We were headed to Castlerock, Northern Ireland and a wedding!

On our way up the west coast of Ireland, we enjoyed some "culinary discoveries". The Irish people we met were wonderful at giving us great recommendations. One of our favorites was the highly rated Moran's Oyster Cottage in Kilcolgan, County Galway. 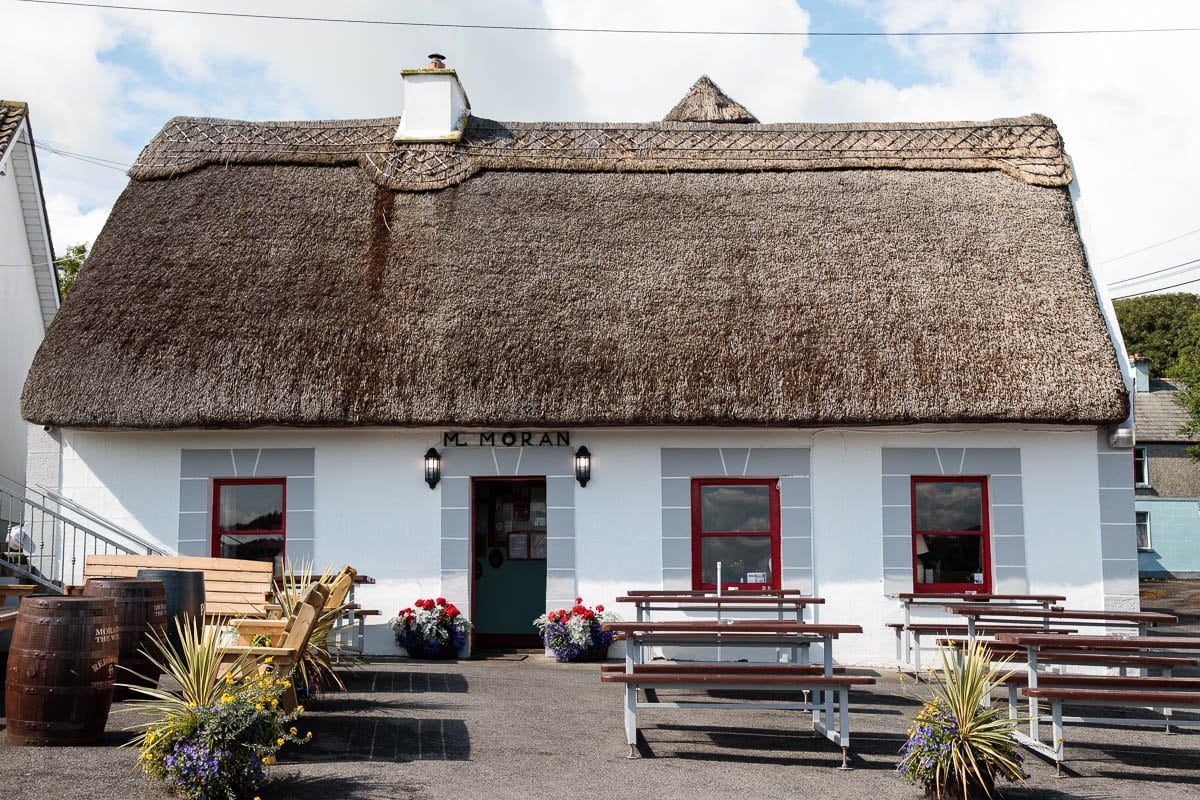 Moran's Oyster Cottage in Kilcolgan has been in the family for almost 300 years!

It didn't take us long to realize how little we knew about the two sections of Ireland. The Republic of Ireland and Northern Ireland share the same island, and yet are two separate countries with a "soft" international border. That simply means you can travel freely without stopping for customs between the two countries. 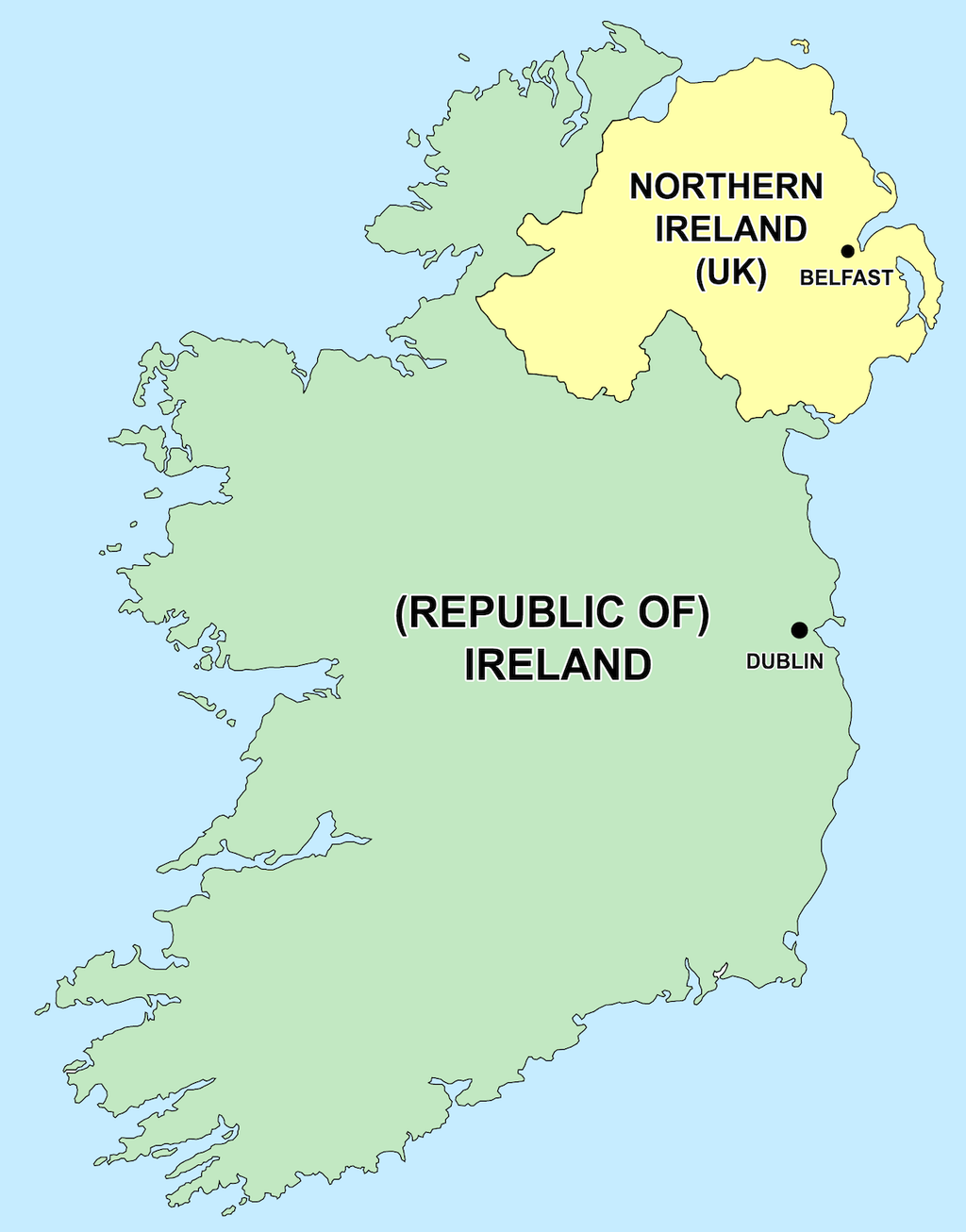 However, when traveling to Northern Ireland, the English pound takes over from the EU euro as the currency and many of the towns seem closer in resemblance to the small towns Chris and I have visited in England. As you can see from the map above, the border wanders in a seemingly haphazard path, so you have to be prepared with both pounds and euros!

Traditional Irish language on the road signs disappears too. What doesn't change? The wonderful spirit and personalities of the people! More on that later.

On to Northern Ireland, Castlerock, Portrush and Portstewart

Since it was only one mile from Temple Mussenden (the wedding site), Chris and I rented an Airbnb in Castlerock, a delightful seaside vacation town near Portrush and Portstewart. 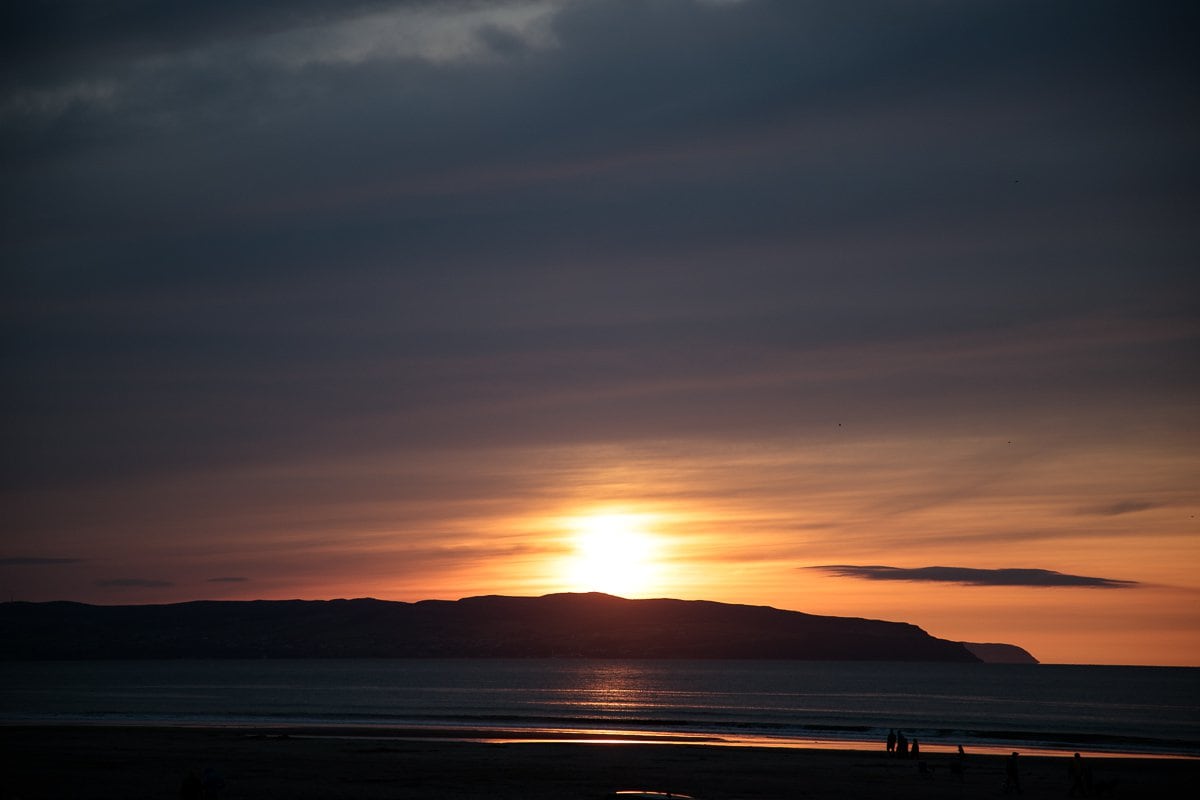 The coast of Northern Ireland is known for its gorgeous sunsets. This was our view the evening before Kacey's wedding.

Mussenden Temple is located in one of the most amazing coastal locations in all of Ireland and it was the incredibly beautiful site of our niece's destination wedding. 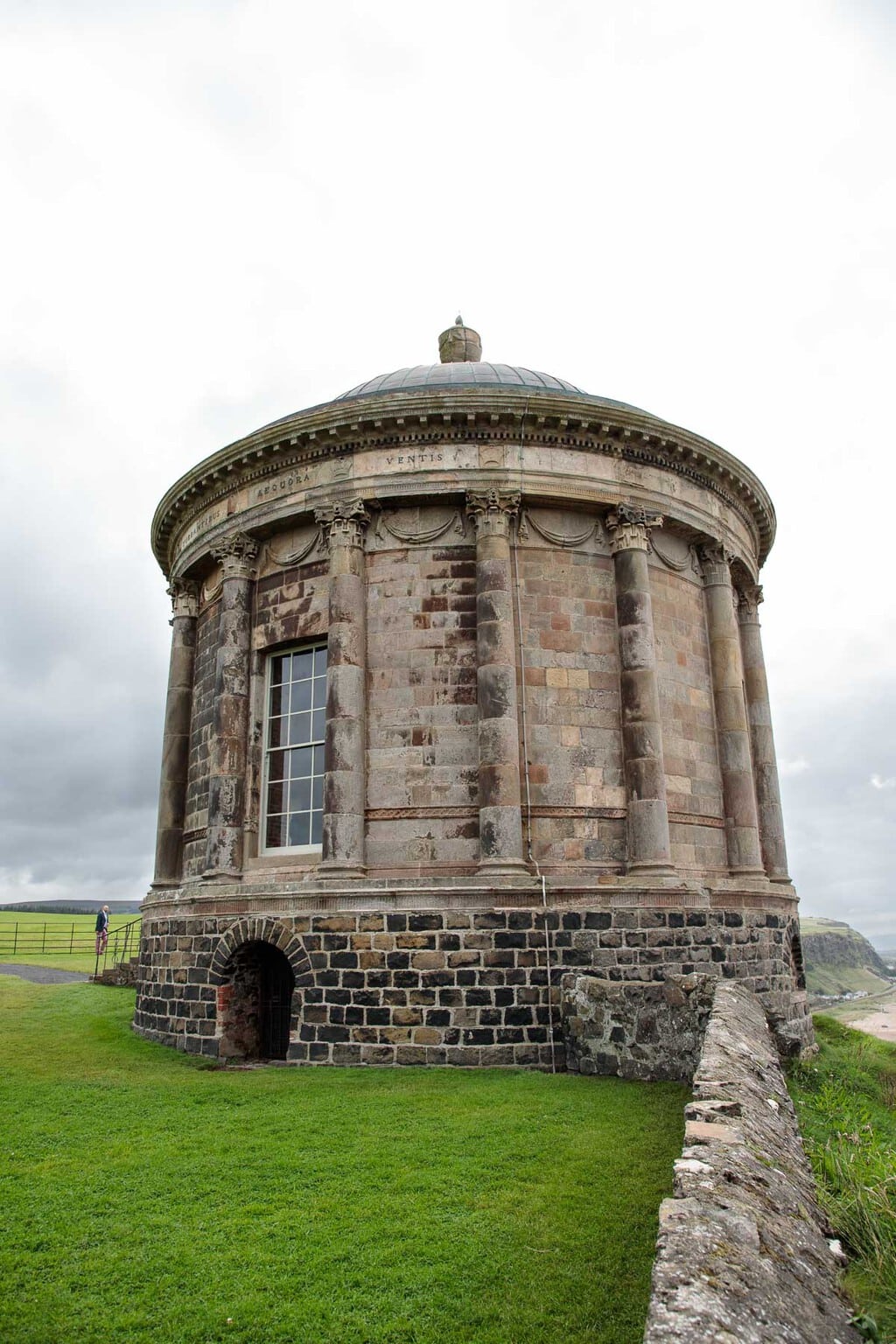 It perches dramatically on the edge of a 120-foot cliff above the Atlantic Ocean on the north-western coast of Ireland and offers spectacular views in every direction. Mussenden Temple was built in 1785 as a summer library for a large estate. 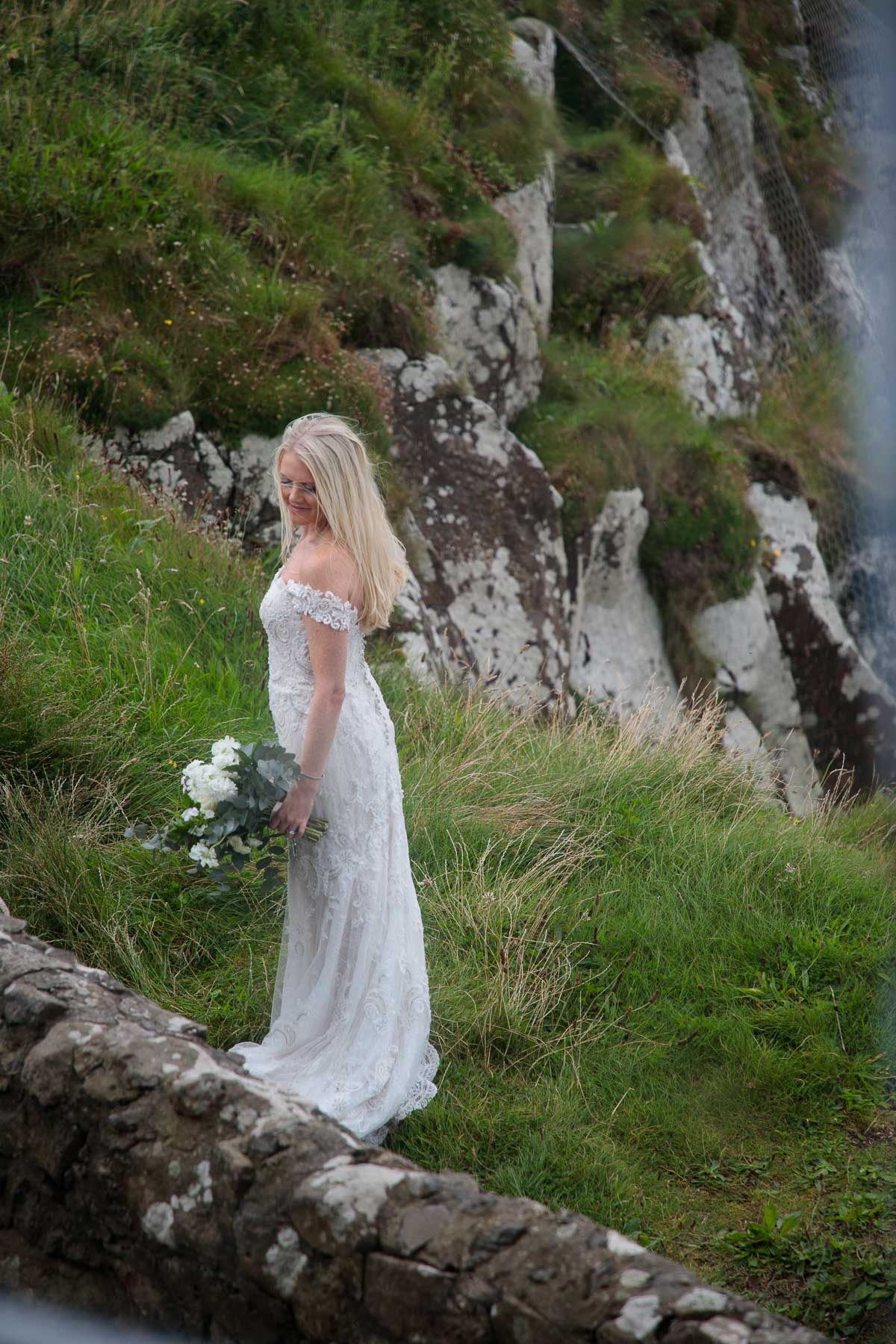 The wedding was beautiful and the bride as stunning as the scenery surrounding this charming venue!

Thanks for joining us in this birdseye view of Ireland, Off the Beaten Path. After the wedding, our three-week trip was (sadly) winding down. We could have stayed another three weeks and would have barely scratched the surface of this amazing country. But there was one last adventure that we'll share in our final post, as well as our very favorite things about Ireland. Part three, coming up soon!