This One-Bowl No-Mixer Homemade Naan is soft, puffy and impossibly delicious! It rivals the naan at your favorite Indian restaurant and you can make it yourself at home with minimal effort!

If you've followed The Café for a while now, I'm sure you've noticed that we love traveling around the world, in a culinary sense. If you look in our archives you'll find recipes from France, Italy, England, Peru, Thailand, Vietnam, India, Turkey, Ireland and more. We love them all and it's difficult to pick a favorite. However, if you pinned me down and forced me to make a choice, it would probably (at least today) be South Asian which includes a myriad of delicious curries and Indian-inspired dishes. This delicious homemade naan is a fabulous side for any South Asian/Indian entree and you can make it yourself so easily at home! 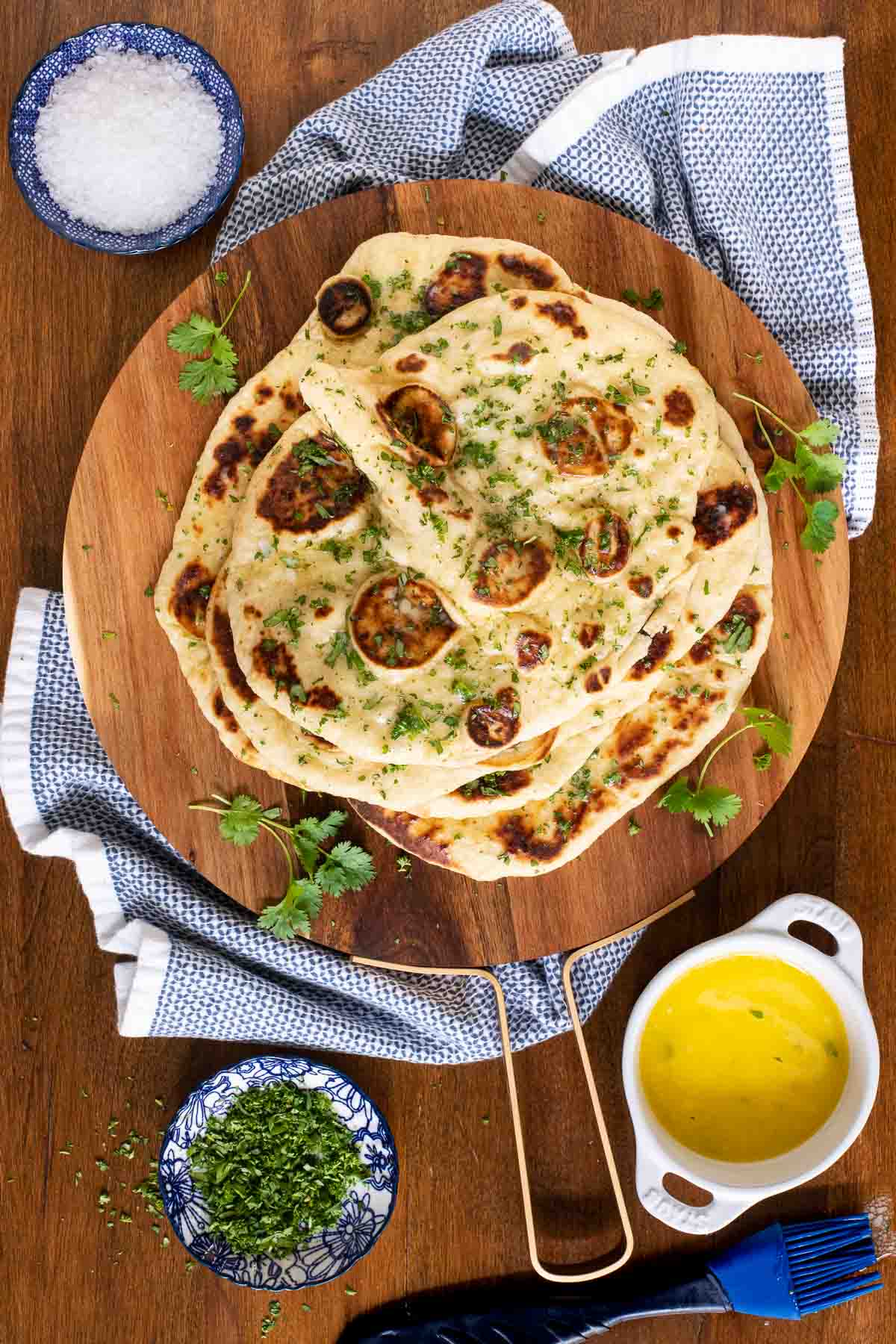 I've tried lots of homemade naan recipes in the past but haven't been thrilled with any of them. They were either too complicated, too last-minute or had inferior results. I decided to experiment and come up with my own version that would be easy, make-ahead and super delicious. It's taken me awhile, actually years on and off, but I think this One-Bowl (besides a measuring cup), No-Mixer Homemade Naan is "the one" that finally has my whole-hearted seal of approval. 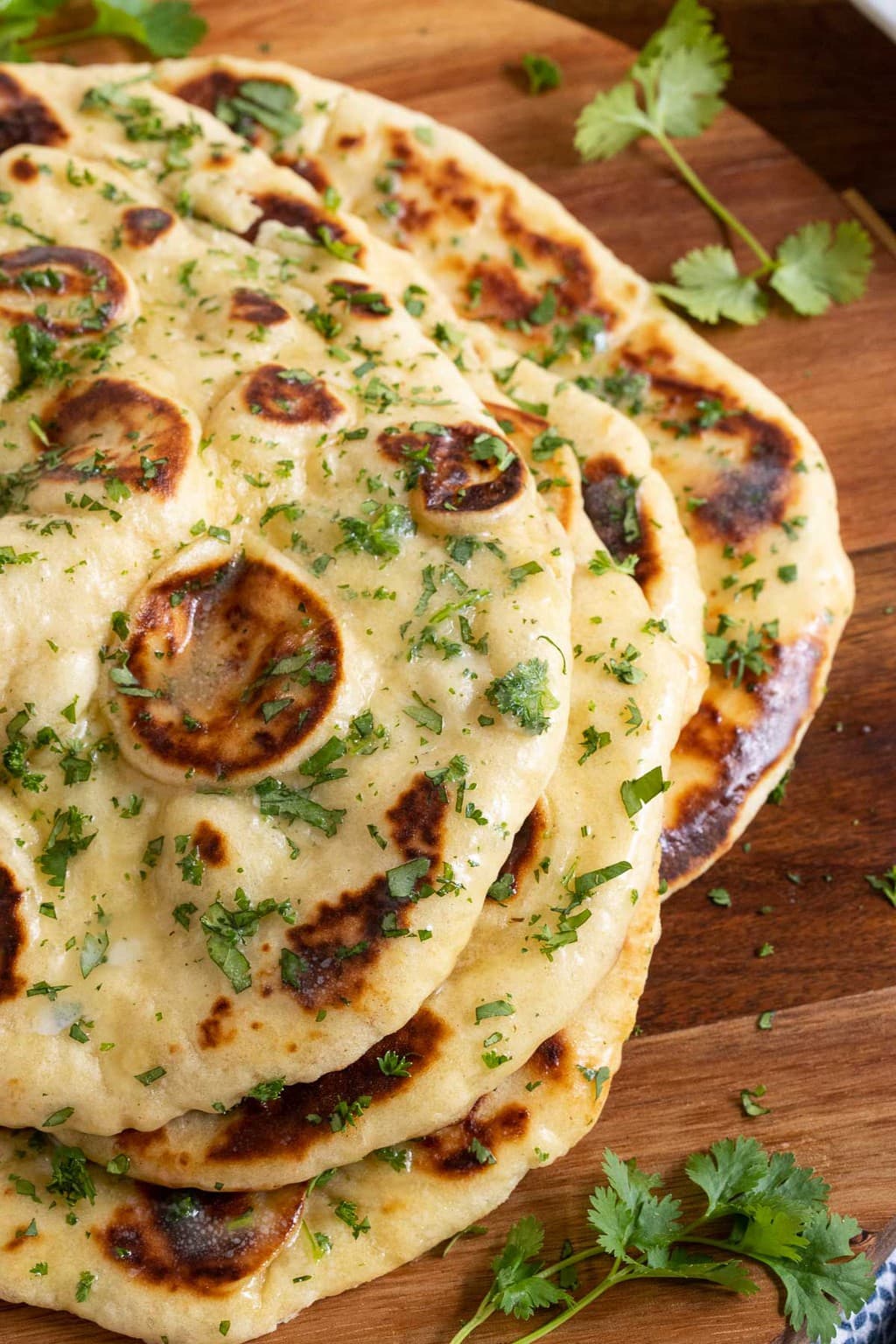 I love that you can stir up this homemade naan in about 5 minutes, even if you've never made bread before. How does it work? Simply combine flour, instant yeast, sugar, salt, baking powder and a pinch of baking soda in a medium-size bowl. Then heat milk and butter in the microwave long enough to melt most of the butter. Whisk in a scoop of Greek yogurt and combine the wet and dry ingredients. That's all for now on your part. The yeast, however, will be working magic for the next 60-90 minutes, yielding a soft, puffy dough.

On a floured work surface, divide the dough into 6-8 (depending on how large you like your naan) equal pieces, forming each portion into a ball. Cover the dough, check your emails, make a phone call, whatever you need to do. Come back in 15 minutes and the dough will be ready to shape and finish. Heat a cast-iron or nonstick pan and set up a little workstation with two bowls (water and melted butter), a clean kitchen towel and a spatula.

The dough is easy to work with and roll into circular or oval-shaped naans. You can roll them all at once and stack them for an easy workflow. When the pan is hot, brush one naan with water, place it (wet-side down) in the hot pan and cover. The water will create steam which, in turn, will create air bubbles as the dough heats. It will only take about 30-40 seconds for the top surface of the naan to form the lovely bubbles which help make the pillowy-soft, final product. Flip the naan over and cook just until the bubbles have turned a deep golden color. This will take less than a minute.

As each naan comes off of the stovetop, brush it lightly with butter and keep warm, stacked together in a kitchen towel. You can either enjoy the naans now, fresh and warm OR allow them to cool and store in a ziplock bag. When you want one or two naans, simply heat a nonstick pan over high heat, add a naan and rewarm on each side for 15 seconds. They will be fresh and tasty; like you had just made them! 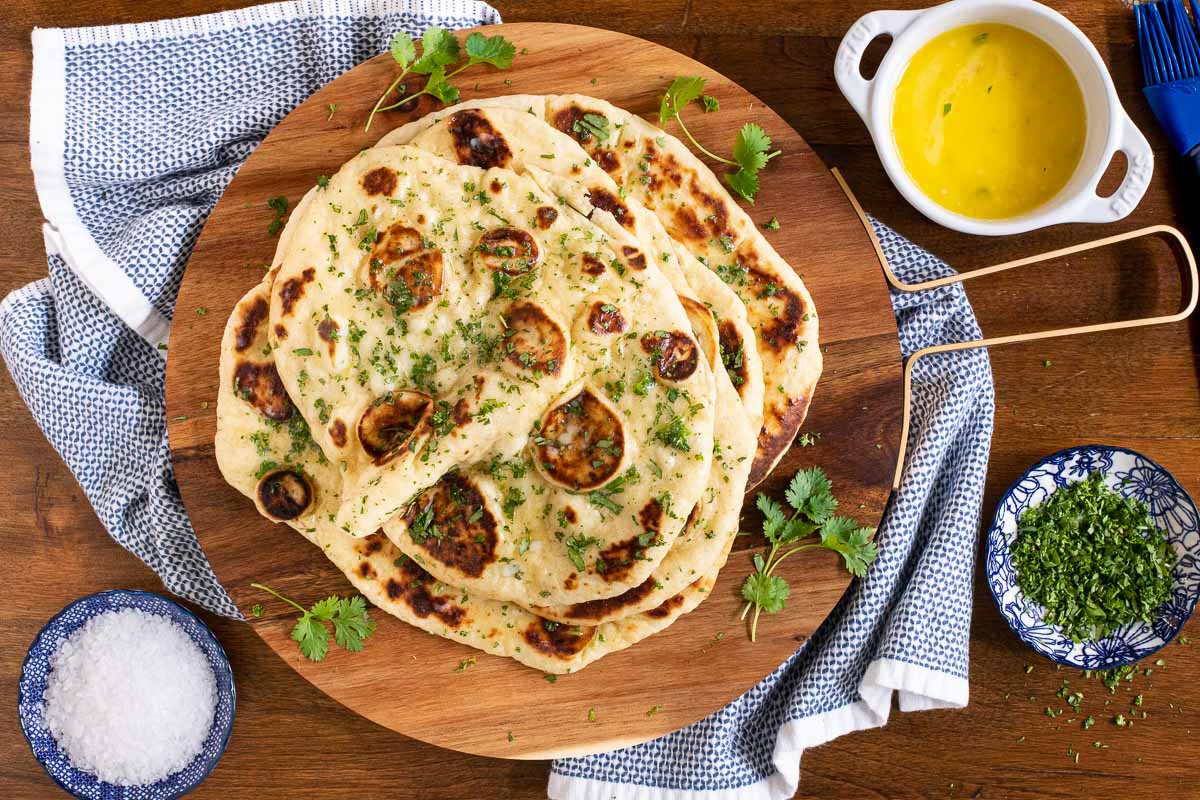 The history of naan

According to The Chicago Tribune, "The South Asian clay oven bread known as naan came to India from Central Asia with the 16th-century Mogul emperor Babur." The Indian Express writes that, "The first recorded history of Naan is found in the notes of the Indo-Persian poet Amir Kushrau, which dates this unleavened bread to 1300 AD." Either way, naan has been a beloved specialty food in South Asia for a long, long time.

It's also gained popularity over the past 20 years here in the U.S. probably due to the increase in Indian and South Asian restaurants where warm naan is frequently served as a side to curries, tandoori dishes, Rendang, Tikka Masala and dahl. Most major grocery stores carry at least one brand of naan and often also have frozen versions as well.

How to serve naan

There are so many delicious ways to use homemade naan: 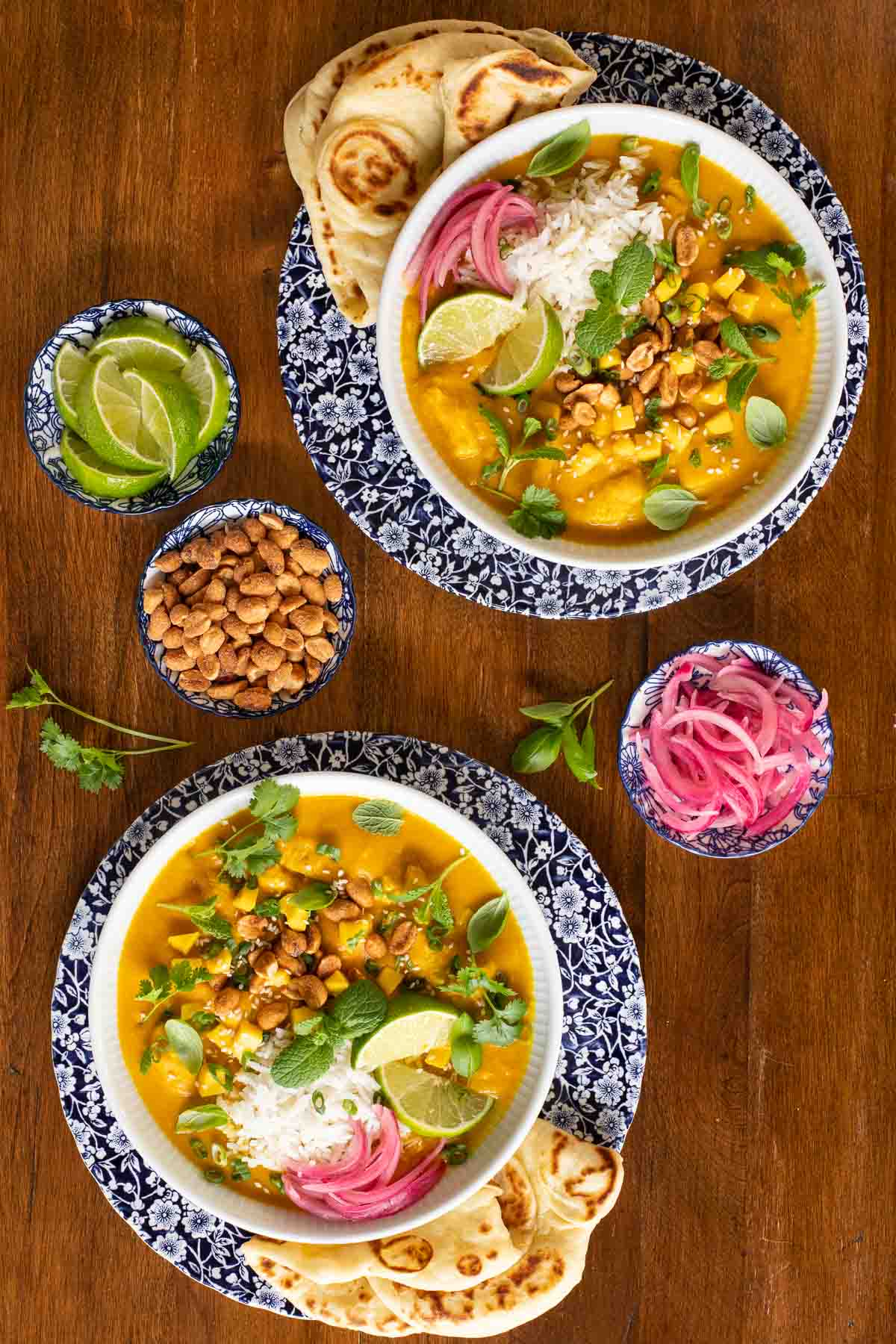 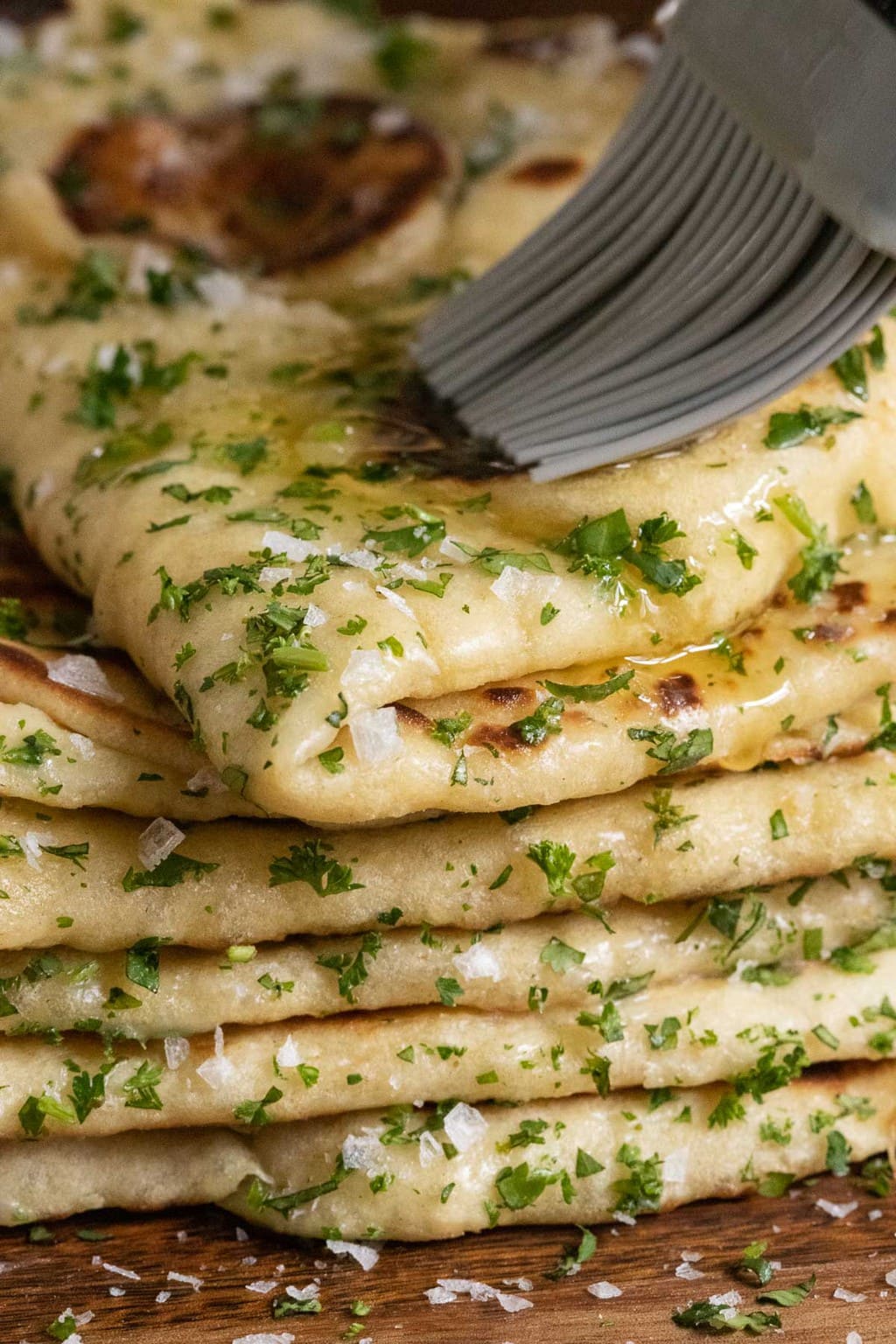 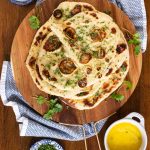 The Café Sucre Farine is a participant in the Amazon Affiliate Program. The Amazon Affiliate Program is designed to provide a means for sites to earn advertising fees by advertising and linking to products on Amazon. The price you pay as a consumer does not change, but if you make a purchase through one of our links, we receive a small commission – and we continue delivering delicious recipes to you 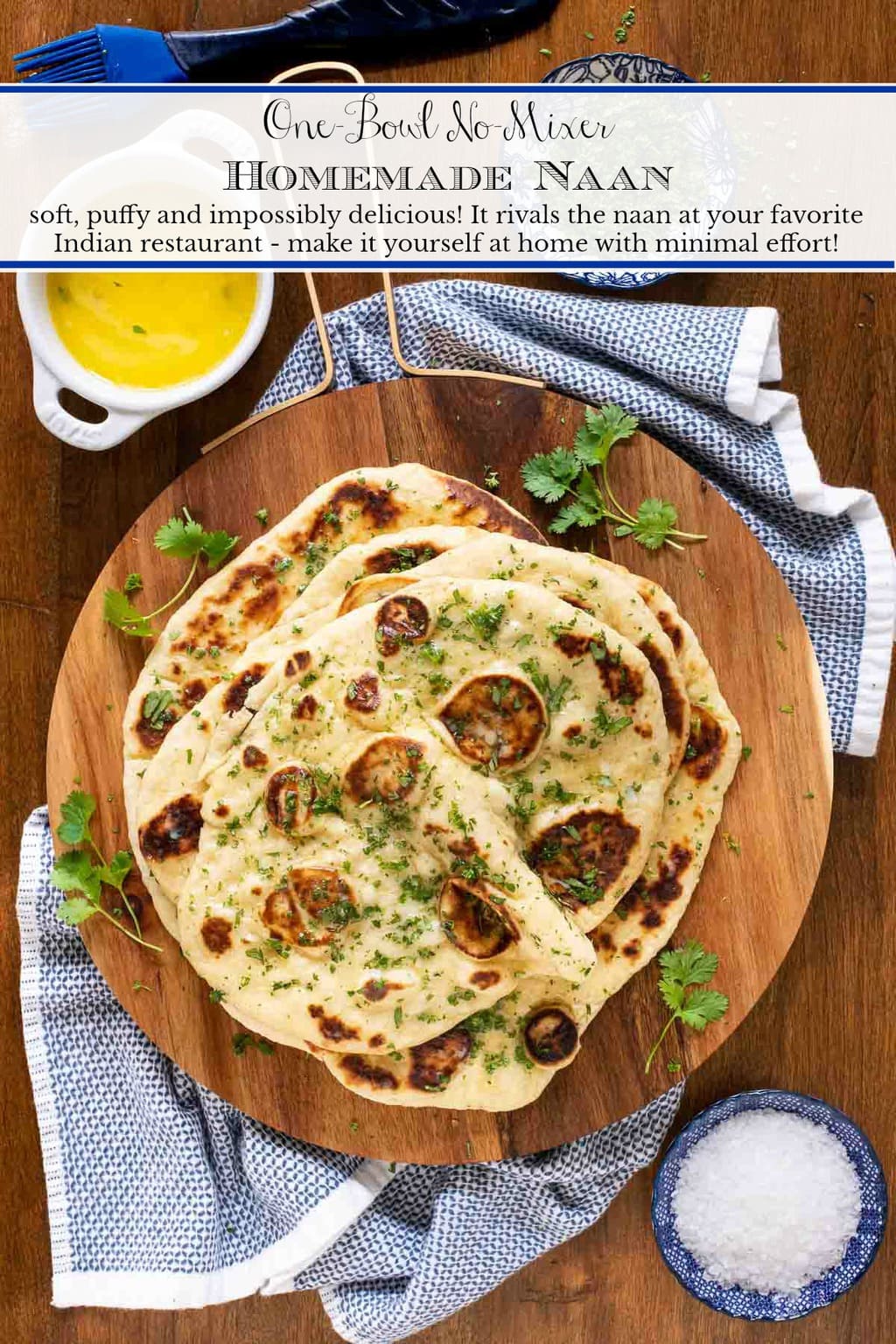