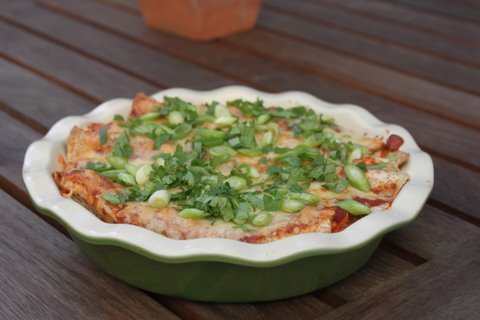 I have a few more days left of my visit to London and have had a great time being with family and enjoying the city. My daughter and daughter-in-law and I spent two days walking and biking in the Cotwalds which is as quintessential "English Countryside" as one could ever imagine. We enjoyed charming little villages decked out with thatched cottages, charming cafes and breathtaking flowers that seemed to pop out from everywhere we looked! There were ancient stone fences that went on forever and countless fields of British wooly sheep. It seemed that around every corner was a photo-op and amazing vistas that looked like visions from a travel magazine. All in all it has been an awesome time and I must say Britain is an incredible place to visit! I'm including a few fun pictures below as words just can't describe........
While I've been away I have had a few guest bloggers who have helped to fill in the gaps. Today  I am so happy to introduce my dear friend and sweet daughter Caitlyn. I realized that Cait was going to be a great cook many years ago. One incident in particular stands out in my mind. I was sleeping during the day because I had worked the night shift at the hospital. Before the alarm had a chance to ring, I was awakened by the most marvelous aroma permeating the house. It was the middle of the summer and Cait couldn't have been more than 12 years old but she had decided to make Christmas cookies! When I followed my nose to the kitchen I was greeted by an entire counter covered with delicious sugar cookies! She had also made butter cream frosting and found all the forlorn decorating sprinkles and chocolate jimmies that had been stashed away from the previous holiday season. I never did know how much of the dough and frosting was consumed before I woke up but nevertheless it was a sight (and yummy taste!) to behold! Meet Cait...........
After having lived in the southern US for most of my life Mexican food has always been a staple whether prepared at home or eaten at one of the plethora of Mexican restaurants in the various cities where we've lived. My family and I moved to London a little over a year ago now and while most ethnic food exists here in excess the one thing I have yet to find is a good Mexican restaurant or any at all for that matter. Even mexican products in the local grocery store are few and far between. So, because of that fact one of the things I beg people to bring me when they visit from the US is diced green chilies so I can make these Enchiladas! 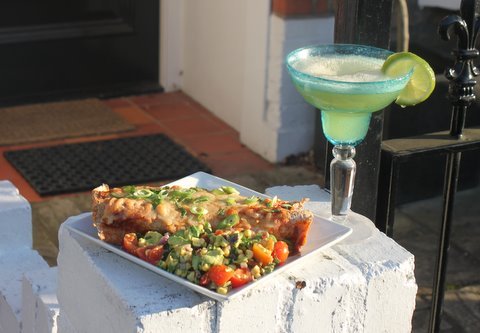 Super Delicious Chicken Enchiladas
1 tablespoon peanut oil
2 small white onions
1 tablespoon dried parsley
½ teaspoon dried oregano
1 tablespoon chili powder
½ tablespoon cumin
salt and ground pepper to taste
2 garlic cloves, minced
1 can tomato sauce
1 small can diced green chilies
2 cups shredded cooked chicken (rotisserie chicken works great!)
¼ cup water (if needed)
1 cup monterey jack cheese, divided
½ cup reduced fat sour cream
8 flour tortillas
Ten Minute Enchilada Sauce (recipe below)
½ cup cilantro, roughly minced
¼ cup green onions, thinly sliced on a diagonal
Tomato, Corn and Avocado Salsa (optional, but very delicious!, recipe below)
1. Preheat oven to 375.
2. Heat oil in a large non-stick skillet over medium-high heat. Once heated add onions and saute for 5 minutes until beginning to soften, then add next six ingredients and allow to cook for another 1-2 minutes before adding tomato sauce and green chilies.
3. Increase heat until boiling, then reduce, add chicken and allow to simmer for 20 minutes. If it begins to get too dry add water in small amounts. Add ½ cup cheese maintaining heat until it has melted.
4. Remove pan from heat and stir in sour cream. Place a scoop of the mixture onto a tortilla and roll. Repeat for each tortilla. Place each in a 9x13 inch pan sprayed with cooking spray seam side down.
5. After all tortillas have been filled and rolled, pour enchilada sauce over pan and top with other ½ cup of cheese. Bake in preheated oven until cheese just begins to brown, about 20 minutes. Allow to cool for 10 minutes and then top with cilantro and green onions.