Super light and tender, these easy pancakes have bits of fresh banana in every bite and are topped with delicious, maple molasses pecans.

There was lots of excitement last weekend here in North Carolina. A big snowstorm swept through the state from the mountains to the coast. Updates on the approach of the storm consumed the news for days and when it actually came, the entire city of Raleigh shut down for 3 days. No school. No restaurants. No shopping. No driving. No nuttin’. I know, I know… if you live north of the Mason-Dixon line, you’ll probably laugh your head off when you hear that 5-6 inches of snow will paralyze a fairly large city like Raleigh for days.

Because snow is so rare here, it becomes “an event”. For days in advance, the grocery stores are mobbed and by the time the storm actually arrives (or doesn’t), the shelves look like a swarm of locusts have been through. Bread and milk supplies are wiped out. Sleds and shovels go out the doors of hardware and big box stores in droves.

The big snow weekend was extra fun for us this time, as Scott and I were keeping two of our grandchildren, Emmy and Hayes. We pulled out the sled, made snow angels, threw snowballs, took long walks and drank hot chocolate with two little rosy cheeked cherubs.

Of course, playing out in the snow made for hearty appetites. One of the nights, as I was putting 3-year old Emmy to bed she asked, “Are you going to make me a special breakfast tomorrow, Geeg (that’s Emmy’s shortening of Gigi)?” I reassured her I would, knowing I had all the ingredients for pancakes, which is always a favorite with this sweet girl.

When Emmy woke up the next morning, she had an announcement to make. “It’s Momo’s birthday!” Momo is her dearly beloved, well worn bedtime stuffed animal. Except it’s not really a stuffed animal, just a little bunny head with a soft blanket hanging from it. “Momo” has been with Emmy from day one and, despite her (very) ragged appearance, is always clutched close and dear at night.

“Hey Geeg, would you have some ribbons for Momo’s hair?” I have lots of ribbon, so that was no problem. “Do you have anything special Momo could wear today, Geeg?” We searched through the dress up box and found a little sequined outfit. I had to tie and pin it to fit Momo. (Have you ever tried to put a dress on a little blanket body? Not so easy.) “Geeg, do you have any decorations for Momo’s party?” We perused through a few drawers and found balloons, streamers and party hats for one and all. Emmy and Papa went to work decorating the living room for “the party”.

I knew that regular old pancakes would never do for Momo’s birthday, so I got busy coming up with something special. A bunch of bananas in the fruit bowl, caught my eye and got my mind whirring. Banana pancakes! I also had a big bag of pecans stashed away and pulled them out to make a sweet, crunchy topping. It took two trials to get the pancakes right. With the first batch, I just smashed up the bananas like you would for banana bread. The flavor was good, but it seemed like no matter how long I cooked the pancakes, they turned out doughy in the center. Back to the drawing board. The second time around, I diced the bananas in small bits, which worked nicely, giving each bite a burst of fresh banana flavor. I enjoy pancakes as much as Emmy does, but they tend to make really tired. I know that sounds strange, but it seems that the overload of carbs in traditional pancakes just doesn’t agree with me. Because of that, I love to add protein to my pancake batter which definitely balances things out a bit. To me, the best (tastiest) way to do that is with Greek yogurt. Did you know that a cup of 0% Greek yogurt has 23g of protein and only 130 calories?

Another benefit of using Greek yogurt for baking is, that like buttermilk, it contains lactic acid which interacts with leavening agents to increase the rise. It also adds a delicious, subtle tang and makes the pancakes super tender. Definitely a win, win, win!

I use this beautiful All Clad griddle for making pancakes and breakfasts for the family. You can make a lot of pancakes in one go – lickety-split! Scott bought it for me several years ago and it’s definitely one of those solidly built, heirloom pieces that will last forever. Emmy, Hayes and Scott all went crazy over these yummy pancakes. Well, me too! With a topping of pure maple syrup, fresh bananas and a sprinkle of Maple Molasses Pecans the banana pancakes made a perfect celebration breakfast. And Momo? Well, I do believe that if she could talk, she would declare that it was the best birthday, ever!

P.S. You might have thought I dropped off the face of the earth, as I haven’t posted for awhile. Nope, I’ve been right here, just haven’t had much time for cooking lately. Scott and I took the last week off to work out some technical problems we encountered when we switched over to the new website in December. We’ve had wonderful support and help to get us through this, and we’re thrilled to have resolved most of the issues. If you encountered any problems with our “Search” function, it’s fixed now and should be much easier for you to find things; plus, the site is loading infinitely faster than before.

For your Pinning pleasure!

Lots of people ask what kind of cookware, small appliances, cutlery, etc. I use in the kitchen.  Here’s what I used to make this recipe. 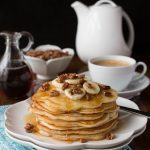 Nutritional information does not include toppings.

* Don't be too skimpy when oiling your griddle or pan. If you like beautiful, golden brown pancakes with a crisp exterior, you need some oil. Pancakes are a splurge breakfast - if you're going to the trouble of making them, make them good! 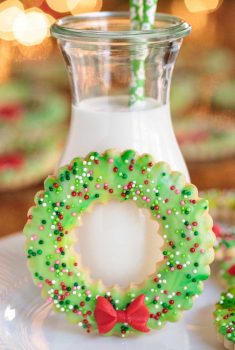 Beautiful, easy and delicious, these buttery Christmas Wreath Shortbread Cookies are a one-bowl, no-mixer recipe with an easy, fun decorating technique. Scott says my kitchen's been looking like Mrs. Claus' workshop for the ...

END_OF_DOCUMENT_TOKEN_TO_BE_REPLACED 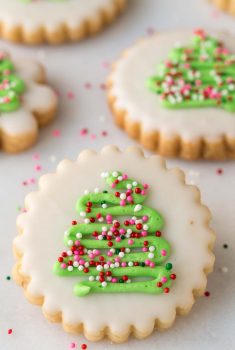 Eight of our favorite Christmas Cookie recipes to celebrate the season and share with friends. These are easy recipes everyone will love! The Christmas season is here! After a wonderful weekend celebrating Thanksgiving with ...

END_OF_DOCUMENT_TOKEN_TO_BE_REPLACED 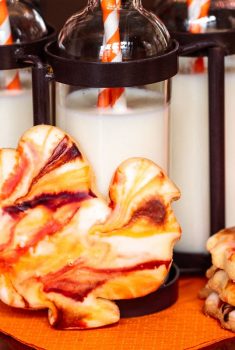 These one-bowl, no-mixer Thanksgiving Shortbread Cookies are crisp, buttery and super delicious! They're perfect for snacks, gifts and entertaining. Each one is a work of art! Are you getting in the Thanksgiving frame of ...

END_OF_DOCUMENT_TOKEN_TO_BE_REPLACED 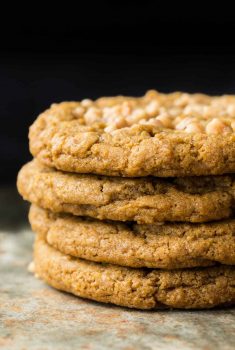 These delicious Pumpkin Cookies have crisp edges and chewy, buttery, toffee-studded centers. They require just one-bowl and no-mixer!  They're truly a cookie lover's dream come true! When I was trying to name these pumpkin ...